Friend of Original Travel Robbie Miles recently won the trip of a life time on an expedition to the top of Mount Roraima Venezuela to accompany Adrian Warren, David Attenborough's camera man of 25 years and Jesse Wilkinson of 'Springwatch' during their shooting of "The Lost World Project". Here are his thoughts and feelings while on his fantastic adventure.

Less visted than the moon...

In August 2010, I was incredibly fortunate in winning a place on an expedition to film a wildlife documentary in the remote tepuis (table-top mountains) of Venezuela, in the northern reaches of the Amazon rainforest. With kilometre high vertical cliffs surrounding these mountains on all sides, the tepuis stand out from the vast carpet of forest like islands in the sky. Their inaccessibility has meant that they have remained beautifully unspoilt and they represent one of the last frontiers for exploration. We filmed on two of these mountains the first of which was Mt. Roraima, the inspiration for Arthur Conan Doyle's 'The Lost World' and the pixar movie 'UP'. Less visited than the moon, Kukenan was our second base and the most awe-inspiring yet tranquil place I'm sure I will ever go. No recollection of mine will be as good as the thoughts and impressions I had whilst I was there so the following is an amalgamation of diary extracts which I wrote in my tent, no doubt sheltering from the relentless rain.

Less visited than the moon, Kukenan was our second base and the most awe-inspiring yet tranquil place I'm sure I will ever go.

'The Lost World Project' is an initiative to preserve these beautiful tepuis. Illegal mining, erosion, species invasion and litter are slowly ruining Roraima so the project's aim is to create a documentary highlighting the beauty and the threats and use this as a tool for generating funding for much needed management of the area. To raise money for the expedition, the project started a student fund raising competition. The top ten fundraisers won a place on the 10 day trip to Roraima and the overall winner stayed on with the two cameramen for the whole month of filming. After a bike ride from John O' Groats to Lands End, I managed to raise the most money so, after putting the other nine students on a flight back to London, I started the real adventure.

The climb to the summit of Roraima started at a Penom village on the edge of the rolling Savannahs. A combination of a setting sun and full moon made the cliffs of Roraima glow in the distance while the sky would flash pink from lightning in the huge storm clouds many miles away. With thousands of fire-flies all around us and a great variety of birds of prey having a final flight of the evening, it was not a bad way to start our adventure. The following day was a stark contrast as Adrian Warren, David Attenborough's Camera man of 25 years, was forced to leave the expedition with a suspiciously sinister lump under his left arm. In a few days, Adrian had made such an impression on us all as being the kind of man we all inspired to be and it was incredibly sad to see him go in such worrying circumstances. Pathetic fallacy followed as the torrential rain fell all day and the 'puris puris' (a blood sucker with the abundance of the midge but made you itch worse than a mosquito) attacked every inch of skin available to them. Spirits were low and we had lost our number one camera man, leaving just Jesse Wilkinson, a 'Springwatch' cameraman, to contend with filming in the rain. The following day was a difficult climb through the tangled vines of the cloud forest. They bore a fascinating variety of life but it was difficult to appreciate it in such heavy rain. Keeping the huge wall of the sandstone cliff to our right, we eventually made it into the clouds and onto the summit. 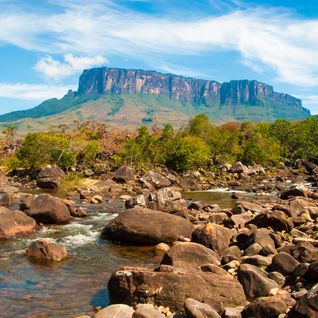 Guest blogger Robbie shares the second half of his once in a lifetime trip...