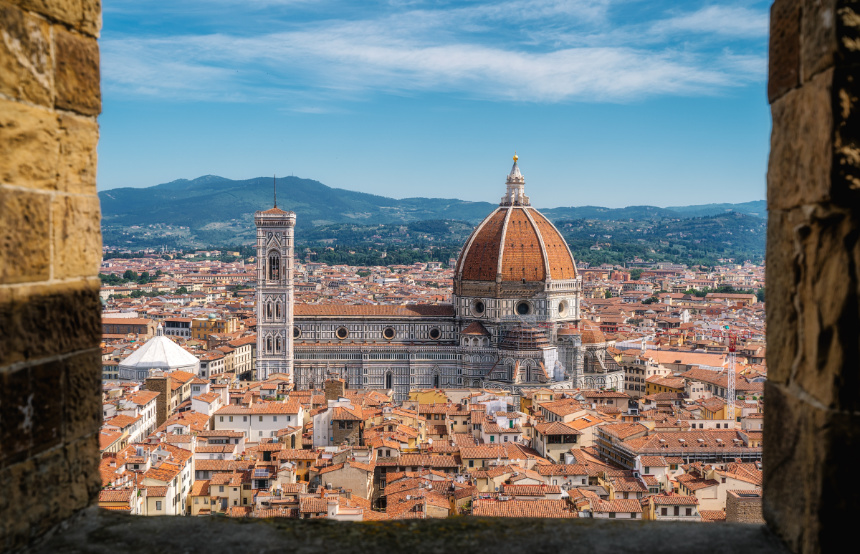 Italy is undoubtedly one of the prettiest places on the planet and it’s no wonder that it’s the fifth most visited country in the world. Home to soaring snow-capped mountains and serene shimmering lakes, to idyllic vineyards and a breath-taking coastline, the country’s natural splendour is abundant. Italy’s beauty comes in many forms, however, and you’ll find equally enchanting vistas throughout the urban cityscapes; Renaissance facades, ancient palazzos and Baroque basilicas juxtapose contemporary skyscrapers and boutique bistros. If you’re in search of a scenic city escape, we’ve compiled a list of the ten most beautiful cities in Italy to add to your travel bucket-list.

As the birthplace of the Renaissance, Florence is filled to the brim with both art and architectural masterpieces, so it’s no surprise that the whole city centre is a designated UNESCO World Heritage site. A treasure trove of culture and history, some standouts include the legendary Uffizi Gallery, the striking Palazzo Vecchio and the dramatic Duomo, which dominates the city’s skyline. While the world-class galleries house undeniably stunning artworks, equal amounts of beauty are found in the frescoed churches and intricate porticoes hidden along cobblestoned side streets. The Florentine culinary tradition is similarly artistic, infusing timeless Tuscan dishes with contemporary flavours.

Bologna’s three nicknames sum up its legacy; La Grassa (the fat one) honours its reputation as the gastronomic capital of Italy, La Dotta (the learned one) is a nod to the university founded in 1088 – the oldest in Europe – while La Rossa refers to the multitude of terracotta-tiled roofs which adorn the buildings. As a bastion of culinary creation, Bologna is the place to really indulge in authentic Italian fare and the masterpiece of Italy’s most delicious city is undoubtedly tagliatelle al ragù alla Bolognese. For those with a sweet tooth, the first commercial gelato machine was created here in 1927 and the city is often referred to as the capital of gelato. Aside from epicurean delights, Bologna is blessed with impressive Renaissance structures, including Piazza Maggiore, Basilica di San Petronio and the Torre degli Asinelli (the world’s tallest leaning medieval tower).

Lucca is one of Tuscany’s most beloved cities and an irrefutable addition to our list of the most beautiful cities in Italy. With charming cobblestoned streets and picturesque piazzas, Lucca lends itself to being explored on foot. The Renaissance city walls and 16th-century fortifications are immaculately preserved, and cycling or walking along the wall-top tree-lined paths provides panoramic views of the sprawling city below. Lucchesi cuisine is another draw; indulge in tordelli (stuffed pasta), followed by befanini (shortbread biscuits) and buccellato (a traditional sweet bread) – as the saying goes ‘chi viene a Lucca e non mangia il buccellato è come non ci fosse mai stato’ (whoever comes to Lucca and doesn't eat buccellato may as well not have been here).

Lecce is another walled city, situated in the southern region of Puglia (the ‘heel’ of Italy’s ‘boot’). The extravagant 17th-century Baroque architecture is so distinctive that the style has become a genre of its own, known as barocco leccese (Lecce baroque), the best example of which is the intricate façade of Basilica di Santa Croce. Other attractions include Piazza del Duomo, the Roman Anfiteatro and the Colonna di Sant’Oronzo. The city is also famed for its papier-mâché tradition, dating back to the seventh and eighth centuries, when craftsmen didn’t have access to precious materials and had to make use of paper and glue.

As the most iconic Italian city and the country’s capital, Rome couldn’t be missed off the list. Thanks to its rich cultural heritage and over 3,000 years of urban expansion, the municipality hosts a whole catalogue of archaeological treasures and historically significant sites. The inventory of major landmarks reads like the index of a history book; the Colosseum, the Pantheon, the Sistine Chapel, the Vatican, the Roman Forum, the Trevi Fountain (and this barely scratches the surface of iconic attractions). Add to this an incredible artistic legacy and a slice of the dolce vita (found in outstanding food markets and quaint trattorias), and ‘the Eternal City’ shapes up to be one of the most charismatic capitals in the world.

Renowned for its associations with Shakespeare, Verona’s Romanesque edifices and winding walkways are suffused with romance, placing the northern city firmly on our list of the most beautiful cities in Italy. For fellow wordsmiths, a visit to Casa di Giulietta (thought to be Juliet’s house from Romeo and Juliet) off Via Cappello can be added to the itinerary. Apart from its literary legacy, Verona’s well-preserved first-century amphitheatre hosts an annual summer opera festival, and if you fancy combining your city break with some natural beauty, head to nearby Lake Garda for crystal clear waters and gloriously verdant gardens.

Another classic Italian city, Venice – the capital the northern Veneto region – has swapped roads for canals and cars for gondolas. Built across more than 100 islands, the floating metropolis was a major maritime and financial power during the Middle Ages and remains one of the most popular destinations in Italy. While parts of the city have become tourist hotspots, there are still plenty of hidden gems to uncover and secluded corners to explore. Venetian architecture is showcased in the palazzi and churches that line the banks of its waterways; the Basilica di San Marco and Palazzo Ducale are particularly spectacular. Sample exquisite seafood and spreads of cicheti (Venetian tapas) at one of the many canal side bistros.

Located on the Ionian coast of Sicily, Syracuse was once the largest city in the ancient world, founded by Corinthia colonists in 734 BC. The island of Ortygia, linked to the mainland by three bridges and measuring less than a mile in length, was the original Corinthian settlement. The historic heart of the city remains one of Syracuse’s main attractions and is an atmospheric area worth visiting. The wall enclosing the isle offers magnificent vistas across the Ionian Sea, while the Piazza Duomo and Duomo di Siracusa are beacons of timeless Sicilian beauty.

The Tuscan city of Siena is a shrine to Gothic architecture, with its serene medieval city square – Piazza del Campo – presided over by the impressive Mangia tower. The city consists of 17 contrade (districts), hailing from the Middle Ages and each possessing their own flags, mascots and traditions. Inside each contrada you’ll find winding, lively streets, punctuated with charming boutiques and authentic pasticcerie (pastry shops). Traditions remain strong throughout the city; the historic horse race, Il Palio di Siena, takes place here each summer and dates back to the 16th century.

Rounding off our list is the ravishing Ravenna, located in the Emilia-Romagna region and home to no less than eight UNESCO World Heritage sites. Strolling through the elegant yet modest city centre, peppered with sophisticated eateries and bountiful markets, it’s hard to believe that Ravenna was once the capital of the Western Roman Empire. Although upon wandering into one of several churches, chapels or baptisteries, you’ll soon see why the pint-sized city deserves every accolade. The heart-wrenchingly beautiful Byzantine mosaics which adorn the interiors are shining examples of early Christian artwork and a veritable feast for the eyes. Some of the most dazzling are found in the church of San Vitale, the Mausoleum of Galla Placidia and the church of Sant'Apollinare Nuovo.