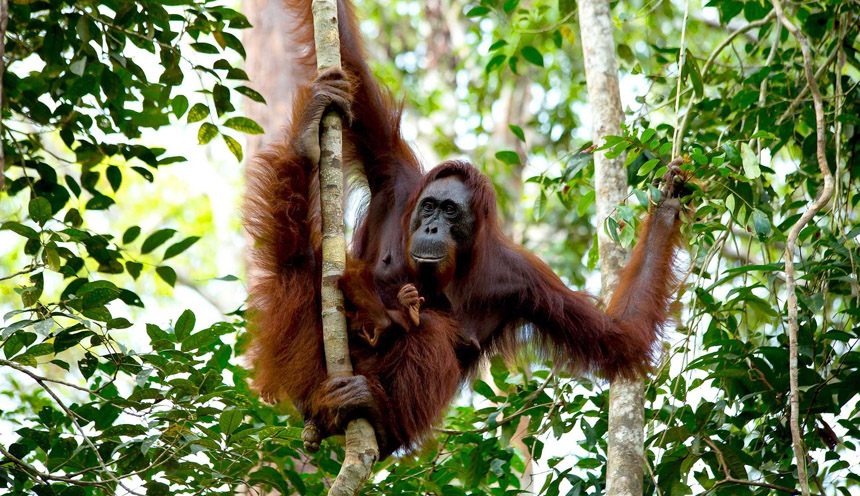 The Malay word 'orangutan' means 'persons of the forest', which seems appropriate for a species that we share nearly 97% of our DNA with. Orangutans are highly intelligent, orange-brown coloured primates with long hair and even longer arms (their arm span can be almost double their height) and are found only on the rugged islands of Sumatra and Borneo, in Indonesia and Malaysia.

King of the Swingers

Their long arms are well-suited to their lifestyle as they spend almost all of their time in the trees of the tropical rainforest that they call home, even sleeping high up in nests in the trees. They usually avoid coming down to the ground, but when they do they move around on all fours.

Orangutans have high cognitive abilities and have been seen making simple tools with which to scratch themselves, using large leaves as umbrellas to shelter themselves from the rain and even using branches as tools during insect foraging. It helps that they have opposable thumbs like humans, as well as opposable big toes, making such activities possible.

Orangutans don't live in groups as males prefer to be alone, but females are usually accompanied by at least one of their infants. Infants share a strong bond with their mothers, highlighting further the similarities with humans, and usually stay with their mothers until they are six or seven years old and have developed the skills to survive on their own.

There are now three known species of orangutan: Bornean, Sumatran and the recently discovered Tapanuli orangutan. There are also two different types of adult male orangutan - flanged and unflanged. Flanged males have prominent cheek pads called flanges and a throat sac which enables them to make 'long calls', which can be heard for miles around (think King Louie from The Jungle Book). Unflanged males look more like females, and can change to flanged males over the course of their lifetime.

Because orangutans are so dependent on trees they are under significant threat from deforestation, as great swathes of rainforest are being used for palm oil plantations. New figures from the WWF suggest that there has been a 50% drop in Borneo's orangutans over the past 16 years. Sanctuaries are a really important conservation method and some are managing to gradually re-introduce their orangutans into the wild.

Trek through the rainforests of the Danum Valley in Malaysian Borneo and the Gunung Leuser National Park on the Indonesian island of Sumatra, or spend days drifting down the Sekonyer River in Kalimantan's Tanjung Puting National Park in a traditional klotok houseboat to see orangutans at the park feeding stations. See them in semi-wild sanctuaries in Sepilok or Semenggoh where, especially at feeding times, you can really get up close and learn about their different personalities from the guides.

I was lucky enough to see five orangutans in the wild in the Kinabatangan Wetlands, and although it's not up close and personal like in the sanctuaries, there's something special about seeing them in the distance.