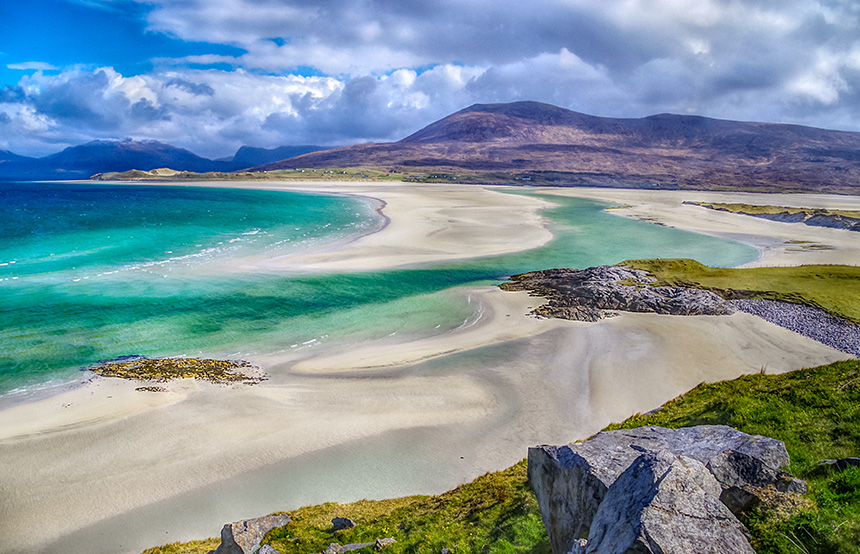 Far from the metropolises of Glasgow and Edinburgh and away from the main tourist trail, you can experience the true soul of Scotland on some of the country’s most beautiful islands, with the smells and sounds of the sea all around you. Be sure to pack a raincoat and a warm jumper (just in case…) and then hop aboard a ferry and set sail for the island of your choosing. If you’re struggling to decide, we’re here to help with a list of the best islands to visit in Scotland…

In the far northwest of Scotland, Harris and Lewis form one island (the largest in Scotland), cut in two by craggy mountains. To the north is Lewis, with its mysterious prehistoric remains and vibrant little town of Stornoway. In the south you’ll find Harris, with its fantastic beaches, turquoise waters and lunar-like landscapes. The island is easily accessible by ferry (either to Stornoway or Tarbert) or by plane, and is perfect for a road trip. During a summer visit, you can also venture to St. Kilda - an island that has been uninhabited since the 1930s - where you can enjoy a walk among the abandoned ruins of the village.

This round island, known for its sparkling beaches and relaxing coves, is located in the very south of the Outer Hebrides archipelago and is small enough that you can easily cycle around it in a day. You can reach Barra by taking the ferry from Oban - a seven-hour crossing each way - or by starting your trip in a more unique way, by taking a flight that lands on the beach (only at low tide of course). From Castlebay, the small capital, you can take a boat to visit Kisimul Castle, which is perched in the middle of the bay, or spend a day kayaking along the coast searching for seals and dolphins.

The Isle of Skye may be popular with tourists, but it is still one of the best islands to visit in Scotland. This beautiful island is one of the largest in Scotland, so it’s worth taking the time to discover as much of it as you can (while of course still respecting and protecting the most pristine corners). The Sleat peninsula in the south, known as ‘the Garden of Skye’, is one of our favourite secret spots, tucked away in a part of the island that is very rarely visited. Home to winding roads, picturesque villages such as Ord, and ruined castles such as Dunscaith Castle, it is well worth a visit. Up in the north of the island, you’ll find the Trotternish peninsula which is beautiful but busy, so instead, we’d recommend heading west to the Elgol peninsula, where you’ll have magnificent views of the Cuillin massif.

These two neighbouring islands are unmissable if you are a whisky fan. With nine distilleries - eight on Islay and one on Jura - it's hard to escape this iconic Scottish industry. If you fancy tasting some for yourself, we recommend trying the peated whisky which has a wonderfully smoky, earthy flavour and is produced on the islands. If you’re not a whiskey lover, don't panic, as there are also some lovely local gins to be sampled. In addition to exploring the distilleries, you can also enjoy several sporting activities, such as cycling (either in Islay, which is very flat and gentle, or in Jura, which is a little more mountainous and offers amazing views of some nearby lochs), and hiking (the four-mile ‘Three Distilleries Path’ is one of our top picks, starting in Port Ellen and linking together the distilleries of Laphroaig, Lagavulin, and Ardbeg with a tasting break or two along the way...).

Located very close to Oban, the island of Mull is easily accessible by ferry, with short 45-minute crossings. Then from Fionnphort, on the south west tip of Mull, you can catch another short ferry to discover the small car-free island of Iona where you can visit the ruins of one of the first Christian monasteries in Scotland, built by Saint Columban in the sixth century. Back on Mull, head up to Tobermory, a small port (famous for starring in children’s television show, Balamory) with cute colourful houses and lots of local arts and crafts shops. If it’s nature you’re after, discover the geological wonders and local wildlife on the trails of Staffa and the Treshnish Islands – the perfect places to visit if you’re a fan of the Giant's Causeway in Ireland.

One of the lesser-visited islands on our list, Eigg may be small (just five-and-a-half-miles long and three-miles wide) but it’s a real Scottish treasure. Explore the mountainous landscape – in particular An Sgùrr, a volcanic hill around 1,300-feet high, which has sheer cliffs on three sides and boasts impressive views from the top – and learn about the island’s unique story (in 1997 it was purchased by a community of 100 villages and has remained completely self-sufficient in energy since, largely thanks to the development of wind power).

A few miles from the north coast of Caithness, the Orkney archipelago is a little paradise for history lovers. Several ferries coming from the mainland dock here, and once you’ve arrived you can start exploring Mainland - the main island - where many archaeological remains have been discovered including Skara Brae, a 5000-year-old village buried under the sand which is a wonderful relic of the daily life of the island's first occupants; and the stone circle of Brodgar, located near the centre of the island, which still leaves researchers baffled by how it was created. If you really want to get off the beaten track, head to one of the islets in the north of the archipelago, where aside from sheep and trickling streams, you can enjoy complete peace and quiet. For something a bit different, try out the shortest commercial flight in the world (just one-and-a-half-minutes) between Westray and Papa Westray.

Even further north, almost closer to Bergen in Norway than mainland Scotland, lie the Shetland Islands. This flat, almost tree-less archipelago attracts visitors thanks to its isolated location and the unique Scandinavian elements to its identity. A Viking colony until the 15th century, the Shetland Islands still have a Scandinavian soul. Every winter, this connection is celebrated during the Up Helly Aa festival, where the communities, during a big party, dress up as Vikings and set fire to the big drakkar – a Viking warship which they spend several months building. In summer, the days are very long, and you can often enjoy mild temperatures until very late in the evening. Many people stick to Mainland - the main island - however, several islets are worth a visit, such as Unst, the most northerly island in the UK, or Fair Isle, known for its strong knitting culture.

A fantastic day of polo in support of the British Forces Foundation... The British[...] 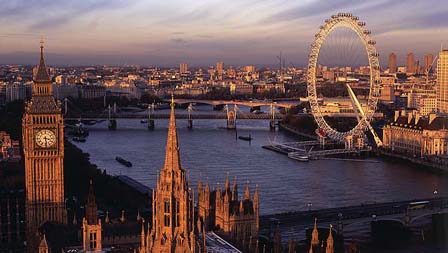