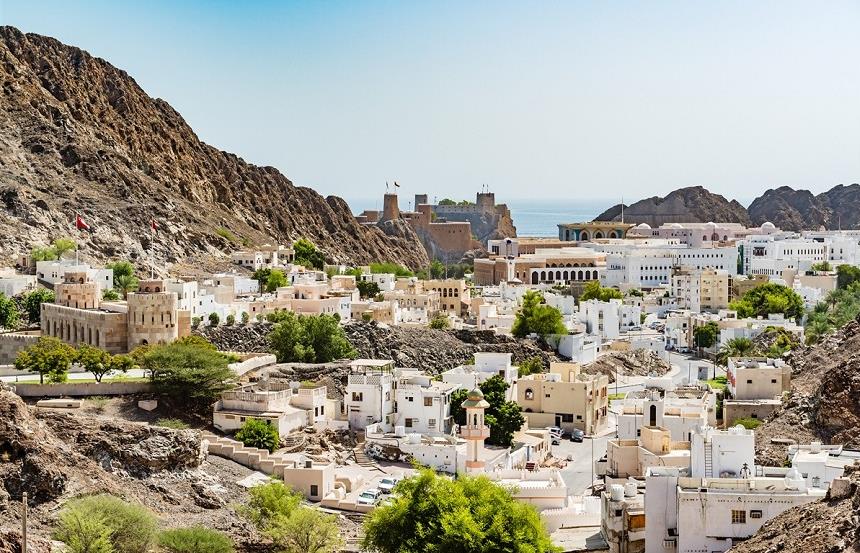 Muscat, sitting between the Hajar Mountains and the shores of the Gulf of Oman, was a great maritime power until the late 18th century. The city has a gentle pace of life which can be felt everywhere, from the beaches to the old fishing harbour - an atmosphere that is a manifestation of a country with a long history and whose sailors and navigators criss-crossed the Indian Ocean for many centuries. Here's how we would spend 24 hours in Muscat...

Walk around the fish market

Watching the shouting merchants and the fisherman return with their catch to the busy fish market is an unmissable experience. Here, as is the case in the entire harbour district, preserved from the hustle and bustle of the rest of the city, there's still a village atmosphere, with ancient 'dhow' boats anchored in the harbour.

Shop for incense at the Mutrah Souq

The Mutrah Souq is the most attractive souq of all the Gulf states. Sheltered in a maze of alleys, hundreds of stalls overflow with merchandise - gold, silver, textiles, dates, spices : everything is sold here. Our advice : buy frankincense, because you'll find the best in the world here. The use of frankincense is particularly important in Oman:  Boswellia sacra, the most renowned tree for its aromatic resins, grows in the south of the Sultanate in the Dhofar region. The highest quality frankincense is translucent white and has medicinal properties, especially for treating respiratory diseases . In souqs, it can be found in the form of chewing gum. The other, darker resin versions are mixed with sandalwood, myrrh and musk and are burnt for fragrance.

The mosque was inaugurated in 2001 and is emblematic of contemporary Islamic architecture, with its golden dome covered in elegant mesh. Everything in the mosque has been conceived on a vast scale : inside, 20,000 believers can pray simultaneously, on the world's largest single piece handmade Persian carpet, measuring 230ft long by 197ft wide; above them, a monumental Swarovski crystal chandelier is suspended 164ft above the ground under an incredible mosaic dome measuring 46ft and weighing eight tonnes. The gardens are equally beautiful, too. This is the Sultanate's only mosque that welcomes non-Muslims, with a visit offering an overview of the religious practices of Oman, especially Ibadism, a moderate form of Islam with the emphasis on brotherhood and tolerance, and practised by the majority of Omanis today.

The former home of Sheikh Al Zubair offers a beautiful discovery of popular arts and traditions – all the Sultanate's regions are represented, along with the rituals and customs of the different communities. Ceramics, jewellery, and cutlery paint a picture of the sultanate's ancient way of life.

Here, inhabitants wear traditional dress, with men dressed in a long white tunic, 'dishdasha' and a 'kumma'  (embroidered round hat) while women wear a long garment called an 'abaya'. The wooden Indian style houses that line the promenade recall Oman's past and its long history of international trade. Walk along the corniche as the sun is setting and mix with the crowds and families out for the evening.

A night at the opera

The Royal Opera House is an architectural jewel with a refined design and dazzling whiteness, inaugurated in 2011: the building was the dream project of the Sultan, an aesthete and music lover, and is the first establishment of its kind in the Arab world.

Luxury Hotels in Nizwa, the Mountains & the Wahiba Sands

Desert Nights Camp Located in the heart of the Wahiba Sands, a vast expanse in the Omani desert[...]

Oh-Man! Why You Should Spend Christmas in Oman

Dashing through the sand, on a one-humped camel train, through the wadis you go, laughing[...]