Fears of driving on uncertain roads melted away in the midday Maniot heat, as we climbed through mountains that tumbled into the crystal blue sea. My reward for braving the hairpin bends from Kalamata to the Mani, was the breathtaking vistas glimpsed in between Cyprus and Olive trees on the winding roads of the Taygetos Mountains as I accelerated on to Kardamili.

The Mani, the tip of the middle finger on the spindly hand of the Peloponnese is still relatively untouched by tourism. The relative inaccessibility of this rugged place made it the land of refugees and feudal villages; its inhabitants had to be hardy and inventive to survive. Now, a thick tongue of tarmac, built before Greece's economic woes, carries you smoothly between villages and as long as you can keep your eyes on the road and not on the views, this area of the Peloponnese is eminently travelable.

It's early June and after an early morning flight to Kalamata, armed with an automatic hire car, our journey into deepest Mani had begun. To break up the three-hour drive to Gerolimenas we stopped at Kardamili. Filled with frothy, pink and white germaniums, this pretty town was made famous by Patrick Leigh Fermor who travelled the Mani and stayed here for the remainder of his life. His cook still here aged 80, was rumoured to have hosted Rick Stein only a week previously, at Lela's Taverna. Basket weavers and cats lounged by the pebbly beach and soon, we were sitting down to a banquet of sardines, stuffed tomatoes, sumptuous butter beans and the obligatory black, Kalamata olives.

The last hour to Gerolimenas sped by as we pointed out the beguiling Maniot towers on the hillsides. Each tower-crowded village decorated with delicate geraniums and gnarly olive trees was guarded by bruised and bloody red iron-rich walls. This land was offered to Achilles as a gift from Agamemnon to stay in the Trojan war. It had to be impressive.

The sea front Hotel Kyrimai, has improved the fortunes of the sleepy town of Gerolimenas. It has a gorgeous private jetty where after lounging with a book and a drink, you can jump straight into the sea. An elderly man leapt into the water with abandon leaving me no choice but to follow suit. Rock formations and colourful fish are visible under the clear water. In the distance, the tip of a mountain which once towered over a city now submerged for thousands of years. I lie back on the lounger and allow visions of Atlantis to swim through my mind.

The hotel provides a beautiful spread of local treats for breakfast. Yogurt with thick local honey, pungent cheeses, olives, bread and a delicious savoury pastry filled with lentils. For lunch and dinner, the restaurant provides a contemporary take on traditional Greek cuisine; local pasta with ouzo marinated prawns complements a delicious dry white wine from the nearby Monemvasia winery. It doesn't come cheap at around â‚¬40 a head, so for more simple fare, the neighbouring Akrotainaritis restaurant, facing the sea and run by a sweet elderly brother and sister duo, offers home cooking for less than â‚¬30 for two.

Local walks are aplenty and quite ambitious. Follow the old kalderimis stone mule paths through the bad mountains of the Mani where it is eerily quiet. The Maniots believe they are directly descended from the Spartans. Scrambling through this inhospitable landscape, peppered with prickly pears, you can see why. Efforts are rewarded when peeping through a window of one of the many byzantine churches that remain in this area, tantalising frescos gleam back through the dark.

Fermour writes that "In summer, ghosts are said to roam the Mani in the hottest hour of the day". Hypnotised by the heat and the silver grey shimmer of olive trees, we marched quietly through the ghost towns, to the incessant hum of the cicadas, and into the deep gullies of the empty valley. With the mouth of Hades reputedly not far away, we were relieved to be back sipping Aperol Spritzers by sunset.

An absolute must is a visit to the nearby Diros Caves. Gliding through caverns aptly named 'The Cathedral' and 'The Crossroads of Nymphs' you feel as if you were gliding across a ballroom of the underworld. Stalactites and stalagmites form unearthly statues in this journey which conjures the river Styx. Be sure to take an extra coin under your tongue for the ferryman for your journey back.

A walk to the temple of Poseidon and Cape Tainaron allows you to explore well-preserved Roman mosaics and take in spectacular views of the Aegean sea. The rocks just beyond the lighthouse mark the southernmost point of Europe.

One of the finest walks in the Mani is to the magical tiny 12th Century chapel of Odigitia set high on the mountain side. A mysteriously lit candle greeted us as we swung open the rusty iron door and a deep peace descended as we traced the frescos decorating every wall with our fingertips. Behind the chapel, hermit caves are carved into the rock where there is evidence of bread ovens and fire pits.

A road trip to the fortified Byzantine town Monemvasia is well worth the two-hour coastal drive for the stunning views alone. Incense and Greek orthodox chanting from the main church seep into the main square where diners sip beers and take in the view. The backdrop is a colourful tapestry of houses, shops and tiny churches. This most touristy part of the Mani provides an opportunity to buy gifts. Ancient recipes for Mead Honey wine, smooth olive wood bowls and flowing linen shirts abound. Eat lunch at Chrisovolou Restaurant for unparalleled views and excellent Greek cuisine.

Drive back before nightfall to avoid the sheer drop roads but not before stopping off at the town of Areopoli for dinner. There's wonderful atmosphere and great moussaka at the very reasonable Barba-Petros. On the drive back home in the dusk, the terrifying head of a beast trundled towards us, its eyes glowing in the glare of our headlights. A minotaur? We quaked. A cow ambled past. The Greek myths had penetrated our minds; It's hard not to fall in love with the idea that they might be true. 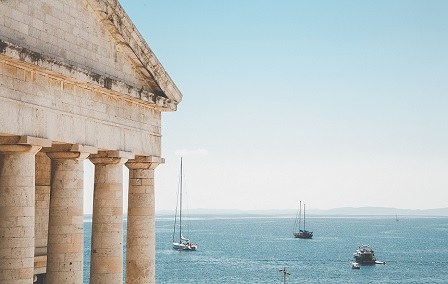 The most beautiful ancient sites in Greece

In Greece, wonders of the ancient world are everywhere. The capital city has its classics[...]

The Peloponnese, if you please

Unable to pinpoint exactly where the Peloponnese might be found, I wasn't too sure[...]