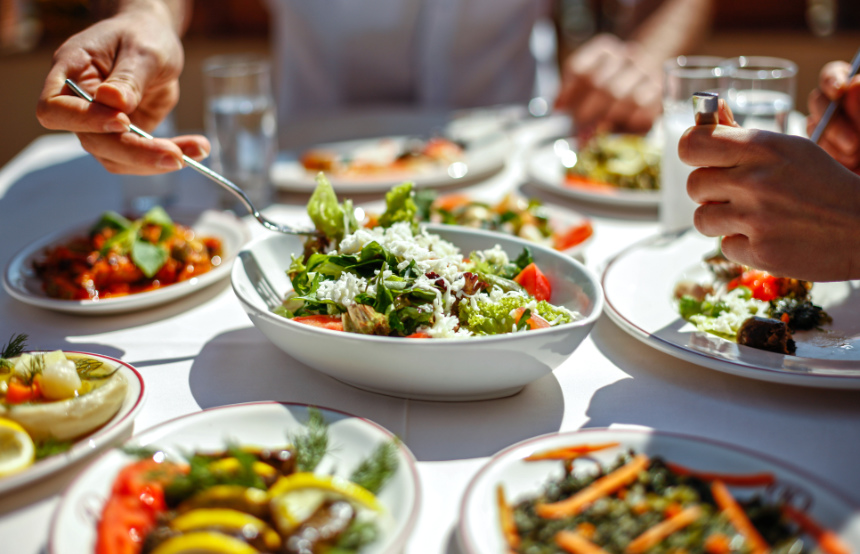 Thanks to Greece's warm and sunny climate and thousands of years of cooking traditions (rumour has it that the first ever recorded cookbook came from Greece), Greek food is some of the best you’ll taste. From creamy tzatziki and fresh Greek salads, to crumbly feta cheese and extra virgin olive oil, traditional Greek food is bursting with colour and flavour. Read on for a roundup of some of our favourite Greek specialties…

No food spread is complete without a fresh salad on the side. Tomatoes, cucumbers, green peppers, onions, olives, feta cheese, and a drizzle of olive oil – these are the ingredients that make up the world-famous Greek salad. This is a dish that is designed for sharing and it has enjoyed centre stage in family feasts for centuries.

Tzatziki is the ultimate refreshing dip to accompany any meal. The main ingredient is yogurt, traditionally one that is made from cow's or sheep's milk, sold in an earthenware jar, and with a layer of whey covering the top. The dish is then usually topped with grated cucumber, coarse salt, garlic and olive oil.

Tarama – or taramasalata – is a rich and creamy side dish that is packed full of flavour. A world away from the pink dips sold in supermarkets, real tarama is white. Some serve it with potatoes, others with breadcrumbs, but most are made with cod eggs, lemon juice, olive oil, and onions.

Fava is a yellow split pea puree, which is eaten warm or at room temperature with lemon juice, a dash of olive oil, candied onions, and olives. This traditional Greek food is made from split peas which are grown on the island of Santorini and have PDO (Protected Designation of Origin) status. Fava is usually prepared using a pestle and mortar and makes the perfect accompaniment to grilled octopus.

A great alternative to hummus, skordalia is a thick puree, typically made with mashed potato seasoned with olive oil, garlic, vinegar, and lemon juice. It tends to be served at the beginning of the meal, accompanied by fried cod, and is best eaten at room temperature. This traditional Greek dish takes centre stage each year on the 25th of March when the Orthodox Church celebrates the Feast of the Annunciation of the Theotokos (a sacred event exactly nine months before Christmas that commemorates the day Archangel Gabriel told Mary she’d become the mother of the Son of God).

Souvlaki is a traditional Greek food consisting of small pieces of pork or chicken, and sometimes vegetables, grilled on a skewer. The meat is marinated overnight in lemon juice, olive oil, and oregano and served with tomatoes, tzatziki and fries tucked in a warm pita bread for the ultimate savoury snack.

A traditional Greek bean soup made with coconut beans, carrots and celery, topped with lemon juice, a nice slice of feta cheese, and Kalamata olives (added just before serving) fadolada is the perfect comfort food for a cosy night in. The dish is hearty, highly nutritious and rich in fiber, thanks to the beans, and it is guaranteed to leave you pleasantly full.

Spanakopita is a popular savoury spinach pie consisting of crispy and light filo pastry filled with spinach, feta cheese, and spring onions. This traditional Greek food is perfect for a picnic lunch at the beach, accompanied by a fresh salad during the summer.

For vegetarians, briam is a great go-to dish, containing a variety of oven-stewed garden vegetables -including courgette, aubergine, tomatoes, peppers, fennel, and potatoes - served on a base of garlic and onions. It can be enjoyed warm or cold, with rice or feta cheese. This dish is typically served in the summer and is bursting with goodness.

Stifado is a rich and hearty stew, similar to beef bourguignon, which is typically made with beef, but can also contain hare, lamb, pork, or even octopus. When it comes to traditional Greek food, Stifado is one of the most emblematic dishes - a comforting meal to share with your loved ones as part of a Sunday family feast. The meat or fish is simmered for several hours in a cast-iron casserole and flavoured with spring onions, cinnamon, cloves, chilli, cumin, bay leaves, red wine, and zesty orange. The most important ingredient is olives, which gives the dish its rich marinated flavour.

In Greece (much like the rest of the world) coffee is a real staple, drank throughout the day. Greek coffee tends to be very finely ground and is heated with sugar to boiling point in a small copper jug with a long handle called a briki. The beverage is then poured into a small cup with a frothy foam on the surface and served with a sweet slice of melomakarona (a small traditional honey cake). During the summer, iced coffee is particularly popular as a cooling beverage on hot sunny days.

Bougasta is a rich and creamy custard pie which contains filo pastry filled with a vanilla cream prepared with finely-ground semolina. Traditionally, Greek people eat bougatsa for breakfast, but we like this sweet treat at any time of the day as the perfect pick-me-up.

Loukoumades are small bite-sized doughnuts filled with honey syrup and sprinkled with sesame seeds and cinnamon. They are among the oldest pastries in the world, first mentioned in the writings of the ancient Greek poet, Callimachus, who wrote about them being offered to the winners of the Olympic Games. You can buy them in most places across Greece and some are still made using the traditional recipe - white chocolate, bitter chocolate, caramel, and praline.

Feta cheese is basically an institution, used in most Greek dishes. Made from sheep's and goat's milk curdled in brine, this PDO-classified dish is hugely popular and has been imitated around the world, to the displeasure of local producers. Traditionally, it is produced from the milk of animals grazing in the regions of Epirus, Macedonia, Thrace, Thessaly, mainland Greece, Peloponnese, and the island of Lesbos.

Kalamata olives are exclusively produced in the hilly region of Messinia, located in the south of the Peloponnese peninsula, a few miles from the city of Kalamata. The olives have a dark purple colour and fleshy texture, and an incomparable taste to rival all other olive varieties.

The most beautiful ancient sites in Greece

In Greece, wonders of the ancient world are everywhere. The capital city has its classics[...]