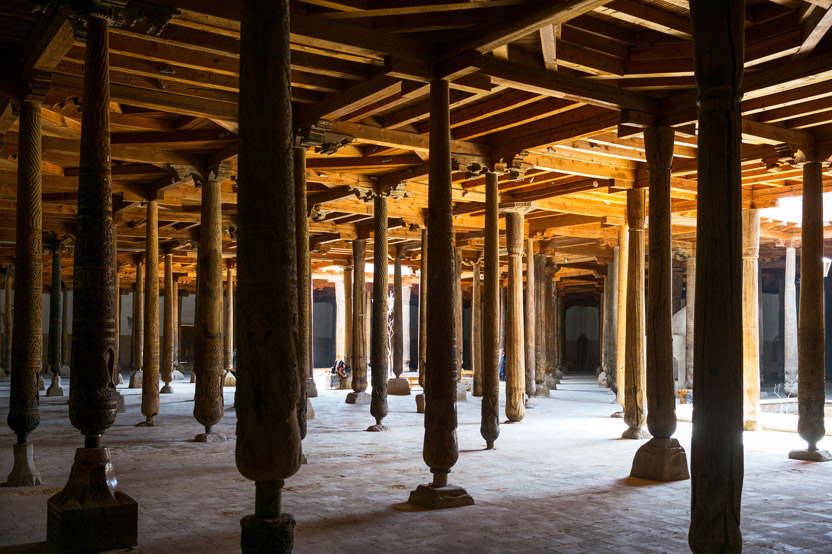 By the end of a twelve day tour of Uzbekistan you might have had your fill of monuments beginning with 'M' - for there are so many Mosques, Mausoleums, Madrassah's, Museums and Markets it's enough to make ones' head spin. And the problem is trying to remember them all as they have a habit of blurring into one magnificent shimmering turquoise dome. Many of the sites have been overly restored, but sometimes this isn't a bad thing... And I still don't tire of the sight of them. Here are a few standout favourites of mine -in no particular order:

A breath of fresh air after the eyesore of too much turquoise, this perfectly formed symmetrical Mausoleum is a thing of great beauty. It is the oldest (10th century), best preserved monument in Bukhara and stands alone - quietly - its earthen bricks a refreshingly simple antidote to the shimmering calligraphic composition of others. The structure of the building is cubic with four identical sides to it, and designs on the outside walls incorporate Zoroastrian fire worshipping symbols and 'squinch' technology (architecture combining geometry and arithmetic).

The 7th Century murals in the Afrosiyab Museum, Samarkand

These murals - beautifully restored - are testament to the city when it was once known as Afrosiyab and are a fascinating insight into the cultures and traditions of the time. The scene is delicately painted and the colours still glow bright depicting on three walls scenes of battle, horsemanship, Emir's, Caliphs and retinues of different ethnic tribes people bearing gifts. All of this is interwoven with symbolic animals and birds and there is now a little video in the museum too that brings the work back to life.

An unlikely contender but fascinating to me because of the grizzly story attached to this particular manuscript. It is stained with the blood of the 3rd Caliph Othman who was brutally attacked and stabbed to death whilst reading it in his private chambers in Medina. His wife Aisha was with him and had part of right hand and fingers severed in the attack. Written in Kufic script in an early form of Arabic on elk skin the book sits in a large glass box to stare at and ponder its age and significance. For more details as to why this particular Koran is stained with his blood read up on who came after the Prophet...

The bazaar in Khiva

Probably the smallest of the bazaars you might get to during your visit, but for me the most atmospheric given the lack of tourists. The best day to visit is a Sunday - a busy market day where all the produce is bought in from the surrounding countryside... During a Spring visit you may see women vigorously shaking sacks of yellow carrots, haggling loudly over turkeys and gossiping behind mounds of neon coloured pickles. Lonely looking cows feet indicate a butcher's shop and the honey stalls are quite literally buzzing. Further out there are seed sellers, broom sellers, sweet sellers, non (bread) of all shapes and sizes, and mounds and mounds of whatever fresh seasonal fruit and vegetable are being grown. It's a big, noisy, friendly fun place and I think spending plenty of time in any market is one of the best ways to get under the skin of a place.

This mosque has an exquisite interior and comes as such a surprise stepping into its cavernous darkness out of the hot desert light. The space is vast, cool and calming with 213 intricately carved pillars supporting the roof made of tree trunks or the ruins of medieval buildings. Four pillars date back to the 10th Century, and the shafts of light that fall from the square ventilators holes in the roof make the shadows dance inside. 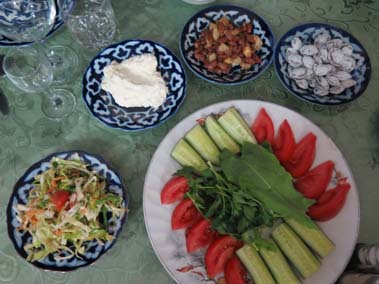 This plov recipe was picked up by Simoon Travel's Amelia in Uzbekistan. Plov is the[...] 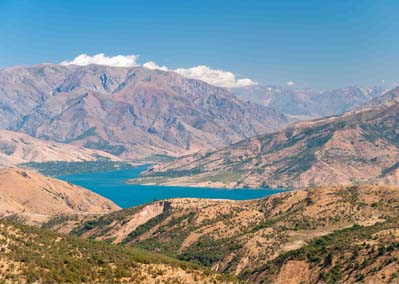 Desert... Or Mountains in Uzbekistan

One of the great things about this little known country is that you can be in the[...]

One Day in Samarkand, Uzbekistan

On the  hill of Afrasiab, see the remains of the ancient city, on a desert promontory[...]