One Day in Samarkand, Uzbekistan 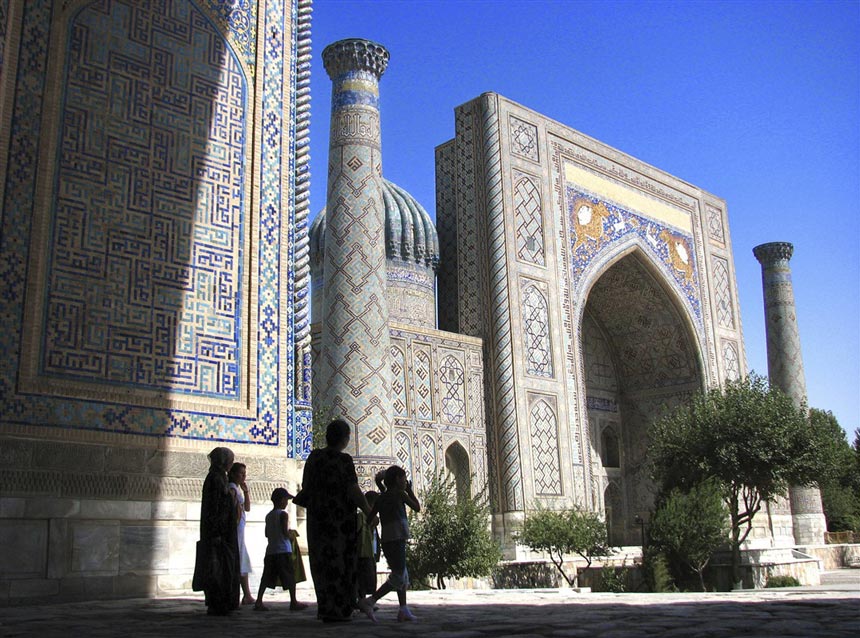 On the  hill of Afrasiab, see the remains of the ancient city, on a desert promontory surrounded by a rampart of mud bricks. From there, Samarkand unfolds its silhouette over a crystal clear sky.

The giant iwans of Registan are carved out on the horizon of snow-covered mountains, blue domes caught up in buildings that rise higher than minarets. Then in the heart of town, Registan Square offers a stunning kaleidoscope of mosaics, earthenware, and turquoise scrolls.

Giant minarets carved from the surrounding rock rise above the ceramic domes. One must imagine the web of alleys of the old town that are now gone - you'd have been able to walk through the bazaars, covered passages, narrow alleyways fragrant with leather and tea, dark and winding paths that converged towards Registan. Then the space would open up, with the blue domes and sky appearing like a mirage. In the Jewish quarter, people stroll through clay alleyways, between mud-brick houses and synagogues.

After your day in Samarkand, enjoy dinner at an Uzbek family's home, with its carpeted floors, Suzani-covered sofas, and ceilings covered with painted canvases. Carefully folded kurpachas are stacked in colourful piles in the corner, which will be used as beds at night. You'll be serve the national dish, plov, simmered rice pilaf, with mutton, yellow carrots, and mint leaves, sprinkled with tea and a lot of vodka. The next day, you'll visit one of the last families of craftsmen who, using a technique inherited from the Chinese invaders, produce paper from mulberry bark, a bark that gives tissue paper its smooth appearance and brown colour.

And in the bazaar, set around a beautiful tea house, the stalls are heaped with mountains of almonds, grapes and cumin. You'll be able to shop for suzani embroidered with colourful silk threads.

By the end of a twelve day tour of Uzbekistan you might have had your fill of monuments[...]

This plov recipe was picked up by Simoon Travel's Amelia in Uzbekistan. Plov is the[...]

Desert... Or Mountains in Uzbekistan

One of the great things about this little known country is that you can be in the[...]