The Best Markets in New York 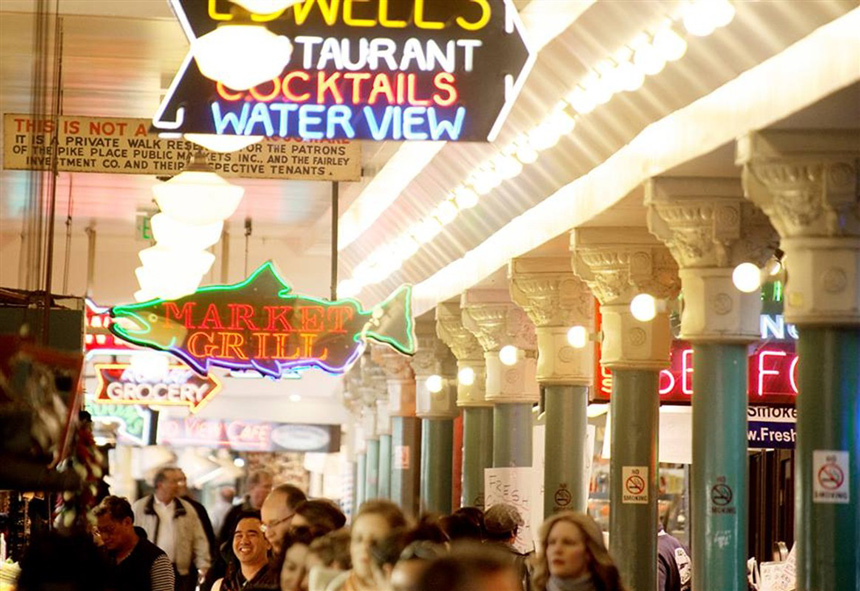 At the time of the new organic era, the  vegan wave was growing and gyms were packed 24/7. The triple-layer hamburger and cheesecake fans may not like the new ' healthy eating' movement, but theirs is a losing battle. New York seems to be swept up in the desire for a green and healthy lifestyle. There isn't a neighbourhood that doesn't boast citizen gardens, plots of land awaiting skyscrapers that have been appropriated by a group of neighbours in order to plant a row of lettuce, a few shoots of tomatoes or a cabbage patch. There's not a flat roof that doesn't end up one day or another being handed over to the spades and rakes of those on the lower floors. Residents are finance experts during the week, and kings of the garden every Sunday. They wear designer suits with stilettos by night, and green aprons, rubber boots and watering cans by day. And for everyone else, head to the Manhattan markets.

The most convenient remains the one hidden in Grand Central Terminal, New York's stunning train station (Lexington Ave and 43rd Street). That alone deserves a visit. A magnificent ceiling covered by the constellations, an immense marble hall filled with footsteps, exemplary cleanliness and memories of the many films the station has featured in, including North by Northwest, The French Connection, Men in Black II and Cotton Club. In one of the galleries on the ground floor, there is an enchanting market for those in a hurry running after their train or who want to come home with dinner. Approximately 40 stalls are lined up on either side of a large aisle. Vegetables, fruits, flowers, bread, wines and cheeses… It's beautifully presented and includes lots of Italian produce. Both the delicatessen and the ice cream assistants speak with the country's accent, rolling the ' rrrrrs '. Grazie Mille !

The busiest one serves as a setting for many fashion shoots and has become the favourite place of many of New York's trends in the space of a few years. The Chelsea Market (9th Ave, between 15th and 16th Streets) occupies the street floor of a cookie factory built in 1898. The decorators carefully preserved this industrial decor made of bricks, cast iron, iron doors, rings and large pipes running to the ceiling along the aisles. The result is beautiful. There are 44 shops, all in the colours of trends of the day : world coffees roasted on the spot, organic certified olive oil stalls, piles of soaps, garden flowers, homemade pastries, sweets for gourmet mums or tops for those just passing through, cheeses matured in cellars, wines selected by oenologists, oysters sold individually and fish caught last night... Reasonable prices with a boho atmosphere, a kind of American version of a discount shop, despite the local 'uniform' of t-shirt, shorts, cap and the latest model of Nikes.

Even more selective, its neighbour, the Gansevoort Market (52 Gansevoort Street) is frequented by glamourous models in joggers just out of their last shoot and artists in paint-stained overalls. The former is sublime and seemingly rather unconcerned by the immense talent of the latter. This old brick building was once where people came to buy meat from the surrounding neighbourhoods. It is in the heart of the Meatpacking District, the old halls, now home to artists, designers, galleries, fashion designers and crowded restaurants. All under the watchful eye of the local lighthouse, the Gansevoort Hotel, the inventor of Manhattan's rooftop terrace with its exceptionally trendy bar and swimming pool. Some summer nights, between black glasses, trendy jerseys and colourful cocktails, the heart of New York City beats loud. The neighbourhood has become even more pleasant in recent times. It is from here that the High Line starts (a very original aerial walk between 14th and 23rd} Streets) and the Whitney Museum opened, the last nugget of modern American art. Then, head to the small market where a Woodstock period Volkswagen combi serves as a food truck (selling Mexican tacos and organic fruit juices). On both sides, behind old wooden counters, some twenty salespeople smile in tune with the times. Yogurt made on demand, macaroons to rival Ladurée, fresh pasta, world teas and coffees and ice cream, not to mention the inevitable Italian whose chiffonades are, it seems, the best in Manhattan.

It's time to head to Union Square to find an outdoor market at last. A real one. There are about 100 stalls manned by farmers from all over the region, including the Amish from Lancaster County, with men in long beards and tall hats and women in long dresses, buns and cute lace-lined headdresses. Here, organic produce is imperative. There are crates and crates of deformed tomatoes, damaged courgettes, earthy carrots and ugly turnips, which means everything tastes insanely good. Honey and jam figure prominently, as do flowers, fruit (the famous New York State apples gave the city its nickname) and cheese. Note that Manhattan's oldest statue is located in the centre of Union Square. It represents George Washington on horseback and was built in 1865. Next door, marvel at the statue of Lafayette.