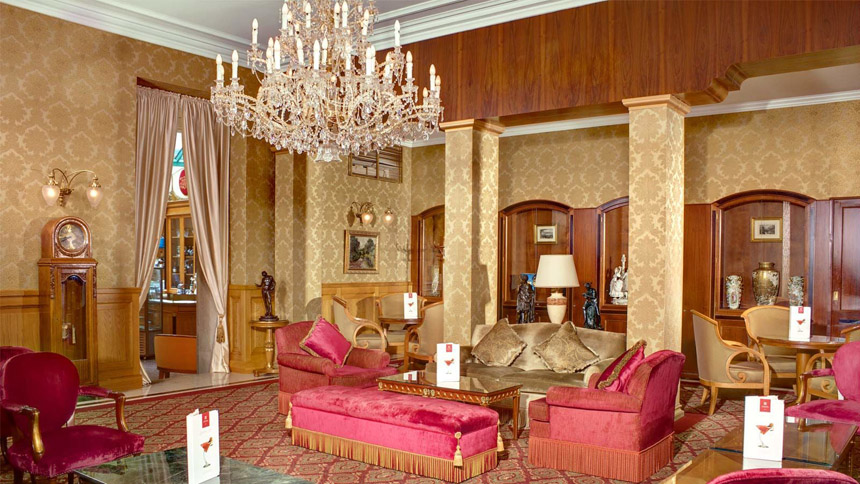 The Ararat Park Hyatt is the most modern of the luxury hotels in central Moscow and often regarded as the best, all just a few minutes walk from the city's most iconic landmarks and next door to the Bolshoi.

There are 206 rooms and suites with king size beds, linen sheets and mirrored glass bathrooms. The glass theme continues throughout the hotel creating an impressive sense of space.

The Ararat Park Hyatt is home to some of Moscow's finest dining experiences, including Café Ararat, famed for its excellent quality Armenian specialties. The elegant Neglinka Lounge in the lobby serves drinks and light meals and beverages throughout the day while the Park Restaurant concentrates on European breakfasts and brunches. Finally, the Enoki restaurant specialises in sushi.

The Quantum Spa and Health Club is one of the best in Moscow, with state-of-the-art fitness heated indoor pool, dry sauna, hammam steam bath, juice bar and spa treatment rooms offering a wide range of treatments. There is also an indoor pool.

Most of Moscow's beautiful people seem to either be guests or staff at the Ararat Park Hyatt, so make sure to dress up to the nines.

Just across the river from Red Square, the Baltschug Kempinski is located on Bolotny Island, Moscow's trendiest hotspot, but also has views of the Kremlin and the Cathedral of Christ the Saviour for traditionalists.

Of the 230 rooms, the ones with river views are undoubtedly the best, but they are all elegantly decorated and larger than most in a city like Moscow where space usually comes at a cost.

The Baltschug Grill is renowned for its puddings and the newly opened Café Kranzler is fast becoming one of Moscow's most popular new restaurants. For those who may have over-indulged the night before, the hotel's spa and fitness studio have been designed with functionality valued as highly as aesthetics.

Not only is the newly renovated Red October district within striking distance - with the majority of Moscow's hippest bars and clubs - but so is the Tretyakov Gallery which houses the finest collection of Russian art in the world; the Baltschug is the ideal choice for those wanting to explore Russia's past and present.

The hotel is perfectly located to explore Moscow, whatever your particular passion.

To say that the National has benefited from Moscow's rich, and often tumultuous past, is something of an understatement; Lenin stayed here shortly after the October Revolution (his latter residence is, coincidentally, about 30 seconds away) and the hotel is decorated with numerous artefacts pilfered from aristocrats' estates and palaces.

While it once housed the Party elite, the National now opens its doors - and 258 sumptuously decorated rooms and suites - to everyone. Antique vases and paintings are paired with LCD televisions and DVD players to create rooms that embody both Moscow's past and present.

Of the National's two restaurants, the Moskovsky is the more formal - serving Russian and European cuisine - and with live piano music in the evenings and views of the Kremlin and Red Square it is easy to see why it has become so popular with Muscovites. The Alexandrovsky Bar specializes in the somewhat unlikely duo of cocktails, Italian food and homemade cakes for those with a sweet tooth.

Room 107 is the room for anyone who wants to say they've stayed in the same room as Lenin but if that's taken, it is well worth paying a little extra for views of the Kremlin.