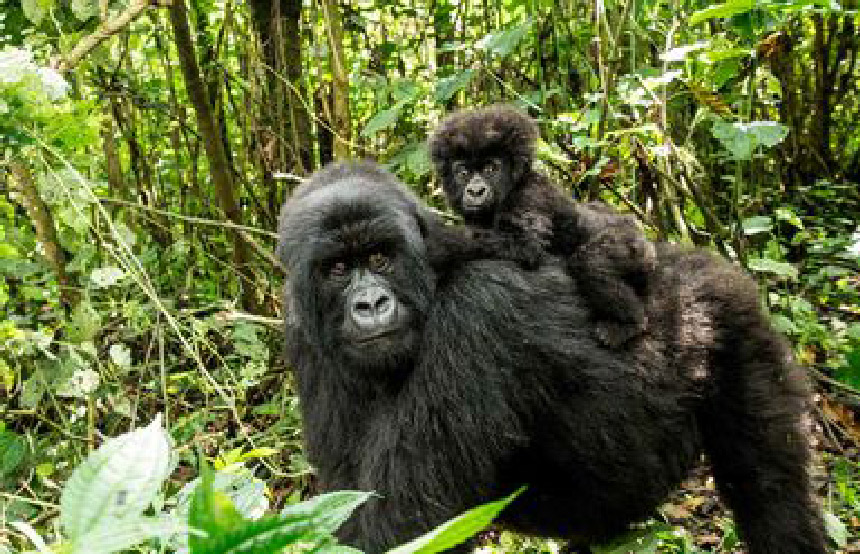 Traversing thickly forested hillsides on foot for many hours may be hard work, but when you then come face to face with a family of mountain gorillas in the wild it is, quite simply, one of the most profound experiences in travel, and one which very few are lucky enough to experience. Tragically, even fewer may have the opportunity to do so in future as numbers of these creatures - who share 98% of our DNA - are sadly dwindling.

Mountain gorillas move around the forest every few days, as and when their food sources run out in a particular area. As the gorillas move they play a hugely important ecological role in seed dispersal, excreting seeds from numerous species of plants found at foraging sites into new areas of the forest and so helping numerous species of plants to thrive.

Gorillas are highly intelligent animals and communicate using a range of around 25 different sounds. With amazingly human-like hands they can also be taught to use basic sign language, Their acute emotional intelligence means they have also been observed grieving, 'laughing' and developing very strong family bonds.

Good leadership is essential to the success of a gorilla troop and each will be led by a dominant male silverback. To have earned his place at the top of the metaphorical tree a male will be over 12 years old, at which point the signature silver hair on his rump will have developed.

Contrary to popular belief there are actually multiple species of gorilla: two main species and four sub-species. The two main species are predominantly separated by the Congo River and consist of western lowland gorillas on one side, and eastern lowland gorillas and mountain gorillas on the other. We send clients to Rwanda and Uganda, where they can see mountain gorillas while trekking through the rainforest on walking safaris.

Head to Rwanda's Virunga National Park or Bwindi Impenetrable Forest in Uganda for the chance to spot mountain gorillas on a guided trek through the forest.

Seeing gorillas in Bwindi Impenetrable Forest in Uganda was well worth the four-hour trek through the rainforest, In fact, I would do double the trek and more to experience those incredible moments again.