Officially European, but still Slavic and unique, welcome to Croatia. In its cities, Renaissance buildings abound, with Viennese and Venetian influences. Island-hopping in Croatia – its islands are so numerous that you can't even list them all. They are sprinkled like confetti over the Adriatic, complete with pristine coves, a topaz sea and riotous bursts of bougainvillea.

Zagreb, baroque houses and incense scents in church doorways, and, in the lower town, along wide avenues to cosy buildings, the constant rumble of the tram together with the hustle of crowded terraces. Before you go, make sure to watch : the Orson Welles classic The Trial by Kafka, shot here; then enjoy a macchiato sipped on the terrace while people watching.

Zadar, the old town stretches out along the peninsula. The white cobblestones are warmed by the sun, and in a small harbour  multi-coloured fishing boats bob gently in the water. Enjoy a drink on a cafe terrace full of customers, no matter what the time of day. And when you get too hot, take a dip in the turquoise water, beckoning at the end of the street. That's the afternoon ritual: from the water to the terrace and back again  until the siren song of a cold Croatian beer heralds the arrival of early evening.

A two-hour boat ride from Zadar, you drift through the Kornati Archipelago – there are as many islands as days of the year; 365 strewn across the sea : rocks dotted with olive groves and all along the many hiking trails, coves of untouched beauty – the island of Pag (which is only a few hundred yards from the mainland), with its desert, arid and lunar landscapes. Make sure to try the excellent, salty, sheep's cheese that you can't find anywhere else.

Split, sitting in a bay, built on a Roman whim, is a maze of squares and arcades.. Emperor Diocletian (admittedly the persecutor of Christians on a grand scale, but not entirely bad : he was the first of the emperors to voluntarily abdicate) wanted somewhere restful and calm to retire. Something of that remains. In the Middle Ages the palace was bursting at the seams, so houses were built and a city was established. Flowers in the windows, washing on a line: the heart of the ancient palace is bursting with life - more than two thousand people live there today, seemingly without realising that  they are inhabitants of a UNESCO World Heritage Site. The huge portico which opens onto the broad Republic Square is magnificent and the noisy terraces, fringed by palm trees and ice cream shops, are reminiscent of the French Riviera.

Two hours by ferry from Split is the most precious Dalmatian island, Hvar. The road snakes round, overlooking a scrub of olive groves, lavender fields and a grid of vineyards surrounded by dry stone walls. A few tiny villages sit sleepily beside the turquoise water, white stone houses sparkling under the sun and surrounded by coves filled with silky-blue water. And, in the heart of this wilderness, the town of Havr, the Croatian Saint Tropez glamorous yachties wander down the alleys of the old harbour and the marina is overflowing with gin palaces and superyachts. And, opposite the port, the archipelago of the Pakleni Islands – a taxi boat can take you to one of these islets, with its small stone house just a few feet from the sea, pine forests and exotic gardens cultivated by the Meneghello family, who have owned the island for generations and who have introduced rare Mexican species – here, 15 minutes from Hvar's trendy bars, there are no cars, just 10 villas or bungalows... and, of course, the blue sea.

Dubrovnik,The Stradun (from the Venetian for 'big street') divides the walled citadel of Dubrovnik right down the middle, lined by frontages with half-open shutters; The city is a collection of ramparts. It's a long walk round them, looking down on the bustling streets, the tiled roofs and the blue of the sea. Dubrovnik is home to a Franciscan monastery, the oldest active Sephardic synagogue, and the Rector's Palace. Elected for a month, he locked himself away there to properly contemplate his decisions. There is a market where small dates are threaded into sweet-smelling crowns and white peaches are for sale on stalls ; enjoy an ice cream on the terrace ; appreciate the radiant sea - the cobalt blue of the Adriatic.

The road runs through vineyards surrounded by hills along a 40 mile strip of land. The ferry then slips past thyme-covered cliffs to arrive at Korcula The old town is a scaled-down Dubrovnik: there's a hump-backed main north-south axis, with alleys spinning off to the west to benefit from the refreshing trade winds in summer, curved to the east to block the icy winds of winter. And on the wider island, forests and scrub, Roman remains, crystal clear coves where some yachts anchor and everywhere vineyards which have been part of the landscape since ancient times. This is where grk  is made. No, that's not a typo: grk is a light wine and despite its name devoid of vowels, it brightens up seafood salad eaten in the shade. 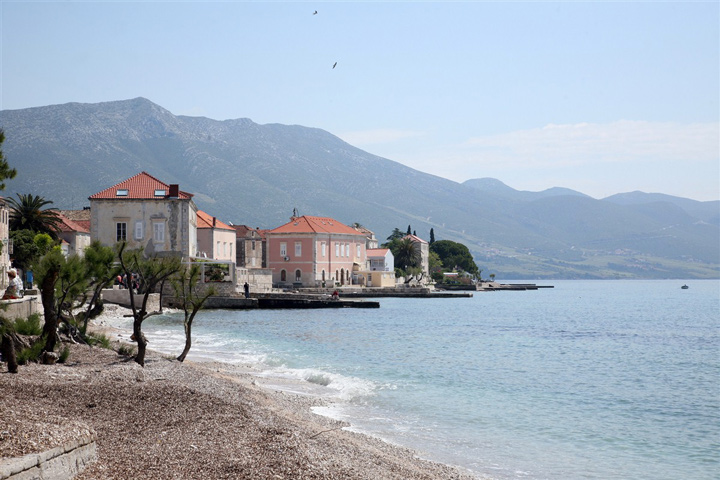 the Isle of Mljet

Mljet Island, the greenest of the Adriatic islands, is also one of the nicest. There's a very deep blue lake , a second, equally blue lake and on that lake there's a pier and an island. On the island, the Benedictines - always seeking isolation – built St. Mary's convent, a sober 12th-century gem. Wander paths lined with yew and Aleppo pine trees, listen out for chirping cicadas, discover solitary coves where you can bathe in sparkling water... Legend has it that this is where the  nymph Calypso tried to keep Ulysses, determined to make him forget Ithaca .