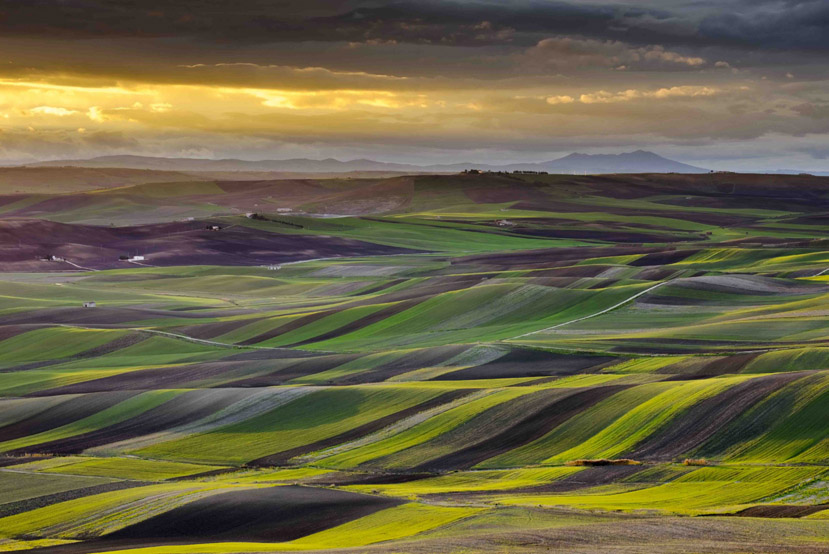 When most people think of travelling to Italy, they picture the rolling hills of Tuscany, the waterways of Venice and the historic sites of Rome. Few would immediately think of Puglia, on the heel of Italy's boot, and yet it too has its fair share of lovely boutique hotels, beautiful countryside and historic cities. Not to mention that it sees nowhere near the number of tourists. Sounds perfect, no?

The countryside in Puglia is unlike the rest of Italy - it is rugged and untamed with buildings in ruins along the roads which are often full of vicious pot holes; yet it is astoundingly beautiful with a stunning coastline and a distinct lack of tourists outside of August. Once you look past the initial unkempt and slightly wild exterior, you realise the place is authentic and wholesome with a unique and very traditional way of life at its core. Moving through the countryside, you are constantly surrounded by olive groves and it's clear why Olive Oil is associated with the area.

The first instance in which I really saw the history of the region was in the stunning hilltop town of Matera and more specifically in the caves of Sextantio Grotte della Civita. I arrived at night and Matera was looking particularly great whilst lit up in the darkness, the Cathedral on the hill standing tall over the rooftops and cobbled streets of the town below. I arrived at the hotel, which is built in a series of caves on different levels in the rock - there is nowhere else quite like it. With candles everywhere and minimal furniture you can try and imagine life as it might have been centuries ago. The caves have been inhabited since prehistoric times and when I asked what the manager meant by the modern brickwork, he casually related to how in the late medieval era the walls were given a little more shape and the cellars were built. It's remarkable that the structure is so intact that you can safely stay in somewhere that outdates all of modern history and that all the caves look out onto the stunning Gravina gorge.

Puglia's towns and cities are not to be overlooked. Lecce is dubbed the 'Florence of the South' with fantastic Baroque architecture - some of the finest in the world I'm told. The old town is majestic, with narrow alleys and grand piazzas alike. There are four gates to the heart of the city, each towering over the squares and adding a Roman feel to the place. La Fiermontina is a lovely family run property with amazing original features and a modern and sophisticated design, right in the old town and moments away from the main attractions of the city. The owner, Antonia, tells a wonderful story of how her grandmother left the city as a girl when she moved to Rome and married an artist. Her brother bought a crumbling site a few years ago and since found such old and beautiful architecture buried beneath the surface that he had it all restored and they now run it together in her memory. Further north, in towns such as Alberobello, you can see the traditional Trulli houses, which are a typical characteristic of the area; they are quite tiny but incredibly sweet. There is a stretch of road from Ostuni towards the coast where you can see for miles and their little round roofs are dotted across the countryside amongst the olive groves.

Many of the best hotels in the region are Masserias - which is Italian for farm house, and in almost all of them there is a decrepit old olive mill under the main courtyard. At Masseria Trapana and also Masseria San Domenico you can even wander around the eerie remains of what was once the life and soul of the structure - it's fascinating to see. Olives however are not the only product local to Puglia; Furnirussi boasts 4,500 fig trees and it must be said that the food here is worth particular recognition. The hotel restaurant is not cheap but the chef uses all fresh local ingredients and it will certainly surpass all expectations for such a boutique hotel. This hotel is not far from Otranto, a lovely little coastal town with an impressive fortress, and the road from Otranto to Santa Maria de Leuca along the cliffs is breathtaking. The southernmost point of Puglia, where the Ionian and Adriatic seas meet is a sundowner spot for the bucket list.

Borgo Egnazia is a perfect hotel for couples and families alike with its excellent coastal location, as well as a world class golf course and great cycling terrain all around. It is also the site of Egnazia, an ancient settlement dating back to the Bronze Age (15th Century BC) which is now a huge archaeological site. Once again, there is more than meets the eye in this part of the world. You can be staying at a 5* hotel complete with gourmet restaurants, excellent children's facilities and a beach club, all carefully restored and with a focus on the well-being of guests - and still be within walking distance from some of the most important ruins in the south - where considerable antiquities have been discovered.

It may lack the glitz and glamour of the Amalfi Coast or the artistic fame and architectural splendour of Florence and Rome - but Puglia has an understated charm that makes you feel like you're seeing the real Italy. This, alongside a colourful history (Gallipoli is only half an hour from Lecce), makes it, in my opinion, as worthy of a visit as all of its more well known neighbouring regions.