Seven of the Most Original Hotels in the World 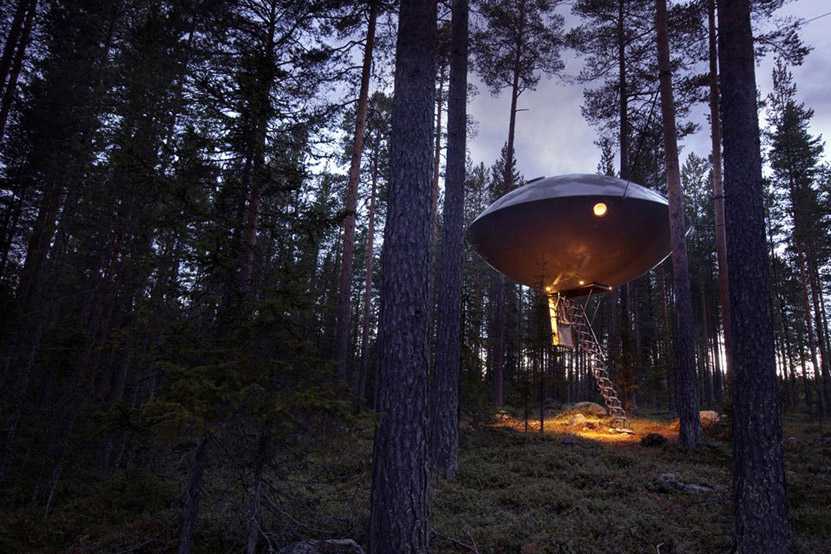 When it comes to original travel, we have quite literally put our name on it. From UFO-shaped treehouses hovering in the canopy of the Swedish wilderness to decadent tented camps above the clouds in the Canadian mountains, our band of intrepid Destination Experts have sought out the weird, the wonderful and downright astonishing from all over the world. So in true Original Travel fashion, we bring to you seven of our favourite hotels that have inspired, allured and left us reeling.

Nestled in the wilderness of northern Sweden, Treehotel has taken the treehouse concept to the next level with its cluster of six high-design rooms. Hole-up in the pine forest canopy in extraordinary cabins resembling slickly executed art installations with unparalleled views of the surrounding forest and Lule river. Rest your head in the Bird's Nest with its exterior of wooden branches, or the UFO that hovers in the air; each cabin indulges both childhood dreams and luxury escapism. If you're in need of modern day comforts, the nearby Brittas Pensionat is a homely 1950s style guesthouse with a sauna, bar and restaurant. Guests can share stories over a daily changing menu of home-style Swedish dishes and seasonal game.

It's baffling to think how Minaret Station ended up tucked away in this remote end of the world - real Lord of the Rings territory, surrounded by the Southern Alps. These spectacular heights can be easily reached by private helicopter, which is also the preferred mode of transport for exhilarating heli-skiing, champagne picnics by mountain lakes or fishing adventures. After days of exploring, stay snug in your uber-glam chalet kitted out with sheepskin carpets and private hot tubs from where you can soak up some serious alpine vistas. The chefs at the Mountain Kitchen concoct outstanding seasonal dishes and are particularly fantastic at preparing venison.

Set within the vast 37,000 hectares of Kulala Wilderness Reserve, Little Kulala is a paradise found amongst the enigmatic camel thorn trees. Made up of eleven climate-controlled thatched villas or 'kulalas,' its privileged proximity to Sossuvlei's towering red sand dunes is unbeatable, whilst reflecting the extraordinary ambience of the Deadvlei clay pan. Alongside all the usual facilities needed for serious relaxation; a pool, elegant dining area, even a candlelit wine cellar, Little Kulala also goes a step (several steps actually) further with experiences like waking up to sunrise over the dunes after a night stargazing on the hotel's rooftop 'skybed'.

Mihir Garh, meaning 'Sun Fortress' could just be the finest sand castle the world has ever seen. After being painstakingly built from scratch, this labour of pure love is a desert retreat like no other just south of the bustling city of Jodhpur, Rajasthan. Spacious suites are exquisitely designed to make the most of magical vistas from sunrise to sunset and include additional private treats such as a jacuzzi, courtyard, private terrace or plunge pool. The hotel owners, the Rohet family, own some of the country's finest horses, including exceptional Marwari breeds, so you can gallop out into the desert on some amazing personalised riding trails.

In the hilltops of southern Italy, the Appenine village is mostly known for the Sassi of Matera; an astounding maze of cave dwellings dating back to prehistoric times. Fashioned out of soft tufa rock, Sextantio Grotte della Civitta has been painstakingly restored into one of the most romantic hotels in Italy. Each room is fashioned with understated elegance; candlelight, minimalist furnishings, some with fireplaces and free standing bath tubs.

Delicious breakfasts of freshly baked focaccias, artisanal charcuteries and oozing homemade cakes are served in a former 13th Century church carved into the stone itself. At dusk, sip on a Negroni next to the fire and soak up the view of the Murgia National Park below. Heaven.

Steered by the genius of Clayoquot Wilderness Resort, Cloud Camp, on the soaring Ursus Mountain boasts ultra-glamping at its finest. A thrilling helicopter ride over endless pine wood scenery, soaring above the clouds, brings you to this exclusive slice of Canada's pristine wilderness. Arrive at this spectacular lakeside mountain refuge looking out onto mountain tops peeking out through fluffy blankets of cloud. Cosy up in your luxury tented camp whilst your private chef prepares a spoiling five course dinner - Clayoquot is Relais & Chateaux approved, so expect phenomenal food even in this isolated location.

Owned by Vik Retreats, who have previously developed upscale hotels in both Uruguay and Chile, Estancia Vik captures a harmonious balance of top notch equine adventure within the luxury of a ranch-style private estate. Sitting in the rolling hills surrounding Jose Ignacio, the property's exterior is immaculately white washed with pristine polo fields on the periphery. When you're not out riding, dip into the large granite swimming pool for a relaxing break.

Inside, the house hosts a mind boggling collection of modern artwork from the sitting room adorned with semi-precious crystals, to the graffiti style parilla where you can tuck into melt-in-your-mouth steaks flamed on a large fire pit. In true Uruguayan fashion the wine cellar is also generously stocked. Delicious.

So there you have it, seven of the most original hotels in the world. If you're planning your own adventure, get in touch.