Imagine a reality in which your soul existed outside of your body in animal form. This is the world created by Phillip Pullman in his best-selling trilogy, His Dark Materials, which was recently adapted into a hit BBC drama starring the likes of Dafne Keen, Ruth Wilson and James McAvoy. From golden monkeys and snow leopards to beetles and birds, these animal companions (called 'daemons') reflect the character's innermost temperaments whether they're devious, daring, kind or cunning. If the series has left you pining after your own daemon, we've got you covered with this round of up some of our favourite daemons and animals from the series and where to see them.

Elegant yet ruthless, Mrs. Coulter's daemon, a golden snub-nosed monkey, is the perfect manifestation of her character. Wonderfully chilling with its human-like demeanour and violent streak, her golden companion is usually present in the tensest moments in the series, the dramatic deaths and heart-in-your-mouth fight scenes. We can organise a trip to China's Sichuan region where you can see these gorgeous golden animals up close. For the perfect getaway, top and tail your trip in the region's capital, Chengdu; home to the Giant Panda Breeding Centre, you can enjoy a double wildlife whammy and the perfect blend of nature, culture and culinary treats.

Star of the series, the formidable Lyra Belaqua, has a daemon called Pantalaimon that often takes the form of an ermine (fun fact: children's daemons can change form until they reach adulthood). Found across the world from North America to Asia, ermines (also known as stoats) may look cute and cuddly, but they are fierce predators known to take on prey double their size. This is fitting for the show's young heroine who is wonderfully brave and undeterred by danger in her mission to find her missing friend.

Although not technically a daemon, we couldn't resist including Lyra's dear, armoured friend the panserbjørn (or polar bear), Iorek Byrnison, in our round-up of our favourite animals from the series. An exiled king who becomes Lyra's fearsome friend, the deep-voiced, quick tempered bear is impossible not to love. Travel to Canada's Churchill region - the polar bear capital of the world - to see these wonderful white-coated bears in the wild. Aboard a Tundra Buggy, explore some of Churchill's most remote areas and spy out polar bears as you bump across the pack ice. For the ultimate experience, stay in a unique Tundra Buggy Lodge where you can fall asleep to the Northern Lights dancing overhead and wake up to a snowy wonderland all around, with bears passing by on the horizon.

Venturing deep into the icy wilderness of Svalbard to find her missing friend, Lyra is kidnapped and held captive by the Tartars, a group of violent mercenaries with fearsome wolf daemons. Catch sight of these fabulous furry beasts while hiking through forest-clad mountains on a trip to Romania's Piatra Craiului National Park. Combine this with a visit to Dracula's Bran Castle for a tour accompanied by an expert historian to get the full Transylvanian experience.

The Gyptians - nomadic, water-travellers who join Lyra in her mission to find a group of kidnapped children - very often have bird daemons who fly above while they float along the canals. On a trip to South Africa, live like a Gyptian as you spend a few nights in the UNESCO-listed iSimangaliso Wetland Park, a watery wonderland on the country's east coast. With some 530 bird species recorded in the park, this is a bird-watcher's paradise - perfect for Gyptian wannabes who dream of having their own feathered daemon friend.

Interested in finding out more about the His Dark Materials animals? Get in touch and we'll be happy to help. 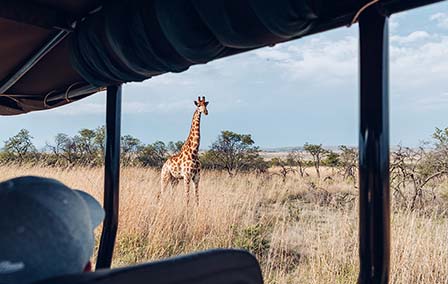