Travels with my Father: a Reminiscent Road Trip through Yellowstone 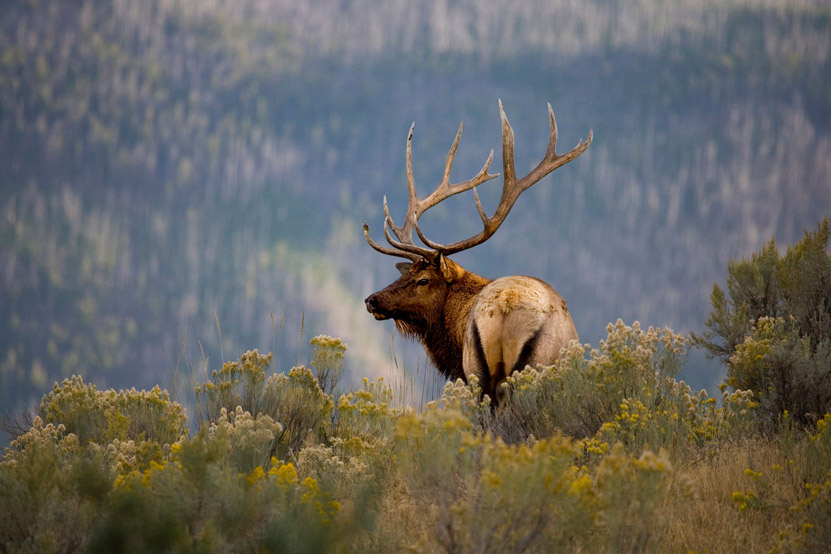 Very soon after my father retired from a 30+ year career as a lawyer in New York, he embarked on a cross country bike trip from San Francisco to New York. The journey was over three thousand miles from start to finish and it took him just under three months. This was, to him, the best way to unwind from many years of stress and the rigid structure of his office environment: the ultimate catharsis.

Just under 20 years later, I set off on a journey of my own (and brought my father along for the ride), but instead of traversing the country West to East like he did, I would work my way North to South from Missoula, Montana to Page, Arizona. Rather than earning my supper by travelling on a bike, I would be comfortably lodged in the driver's seat of an SUV. And rather than three months and three thousand miles, my trip was a mere one thousand miles from start to finish, driven in the space of two weeks. So late last September, I met him in the small city of Bozeman, Montana, and we set off along the same route he took fifteen years before through Yellowstone National Park.

His enthusiasm was palpable: for him to revisit this part of the world many years later, and in the comfort of a car with heated seats and surround sound, was completely new. And while he would be travelling down the same roads, it would be a very different experience. He was content to sit in the passenger seat and gaze out the window while I drove, and so we set off southward through the endless fields and rolling hills of Big Sky Country towards Yellowstone.

Big Sky Country is so called for a reason. It is exquisitely beautiful, peaceful and remote, and perfect for road tripping: there are endless vistas in every direction, the clouds reach the horizon in a harmonious line that stretches out as far as the eye can see. There is a symbiotic mix of agriculture and nature that only ends at the foot of rolling hills. I learned to stop frequently to take in the moments that mattered, else they would disappear into the confines of the rear-view mirror.

Dad and I chatted, and I finally got a chance to hear his stories properly: his descriptions of dipping his tyres in to the Pacific before setting off, the difficult ascents of the Rockies, the endlessly boring, unrelentingly straight roads of Nebraska's flat lands and endless fields of corn Iowa, and the final journey through Appalachia as he crossed into New England and home to Riverside, where he ceremoniously rode to the beach on Long Island Sound to end is trip as he started it.

Dad and I couldn't agree on a ""roadie tunes"", he'd have had Wagner operas, which I protested wouldn't mesh well with the rolling landscapes of the American West. I would have gone with something more suited to the region - cowboy ballads and country or folk, but this ""modern stuff"" irritated him, and so we agreed on companionable silence, punctuated by a tale or two when the mood struck, and calmed by the lull of the engine and the puffy marshmallow clouds and bright blue skies that stretched out in front of us.

A day later, after eight hours of driving and a stop for lunch in Big Sky Mountain Resort (empty and rather desolate in the summer months, but a popular new destination for skiing and winter sports) we reached the borders of Yellowstone National Park. We were staying in West Yellowstone for the night, a kitschy town filled with restaurants with names like Running Bear Pancake House, Buckaroo Bill's BBQ, Bullwinkle's Saloon and Wild West Pizzeria. The high street is packed with gimmicky souvenir shops and outdoor outfitters, gas stations and the Grizzly & Wolf Discovery Center, which is actually worth stopping into, if only to get a grip on how seriously people take their taxidermy in the region. We were tired from the long drive and went into Bullwinkle's for a Bison Burger and a slice of huckleberry pie before settling into our comfortable hotel, the Explorer Cabins for the night.

We set off before daybreak after a huge pancake breakfast at Running Bear Pancake House. This is the best way to go - get out into the park early before it gets inundated with visitors. It was freezing when we stopped to watch the sunrise: steam rolling up from the Madison River and a bright and cheerful, warm orange sun appearing calmly from behind the mountains. It was a spectacular start to the day. We stopped often in the many laybys, and I'd jump out of the car and run to admire a vista, take a photo while Dad was content sitting in the car, or strolling to take in the view, admiring a group of bison or a smoking geyser, an open valley or a mountain in the distance. He reminded me of stories from his trip, my favourite of which was of his encounter with a Grizzly Bear at a campsite in Teton National Park, who wandered absentmindedly into the camp on the hunt for some grub. In order to get him to move along, the campers linked arms and walked towards the beast trying to look like a large herd of musk oxen. After a quizzical look at this herd of humans, the unamused bear moseyed on.

The Park is located atop a supervolcano: essentially a magma reservoir beneath the surface of the earth that is rising to the surface, allowing for some extraordinary volcanic and tectonic action on a regular basis. I was totally overwhelmed by what effect this had on the landscape: from geysers to hot springs, canyons to waterfalls. It quickly became clear why it is such a special place. Around every corner was something so remarkably different from what I'd seen behind it that I was awed at every turn.

While most people go to see the famous Old Faithful geyser, which is incredibly impressive, we skipped this as we were limited for time, and we wanted to fit in as much of the rest of the Park as we could. We took the Grand Loop northwards to Mammoth Hot Springs which oozed and stank but kept me warm with its steaming geysers. We stopped at the visitors' centre at Mammoth, where a herd of elk was grazing outside the door, unfazed by passing humans. We saw bison marching majestically down the middle of the open road. In the distance I could have sworn we heard the melancholy howl of a wolf.

We looped around to Yellowstone Canyon and walked to Lookout Point which has stunning views of the Yellowstone Falls. We drove along the shores of Yellowstone Lake and had lunch at Lake Yellowstone Hotel, a grand dame which was built in 1891 (positively ancient by American standards!), and seems to be stuck in time, its colonial revival facade and stunning art deco interiors belying a rather uninspiring meal in the large formal restaurant.

We ended the day driving through the dramatic Teton Mountain National Park, which leads you into the quaint resort town of Jackson Hole, and we arrived at dusk. Tired but satisfied by our journey, we settled into our hotel and relaxed in front of the fire with a glass of wine.

We had made new memories, together this time, and I hope we will reminisce about them for another 20 years to come.

If you're interested in going on your own grand American road trip, get in touch.