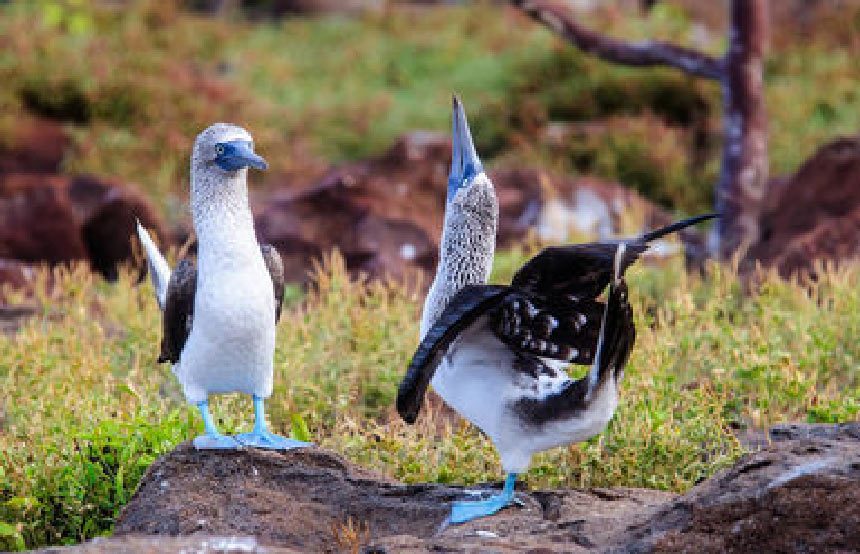 The name for these tropical seabirds comes from the Spanish slang word 'bobo', meaning foolish or stupid, in reference to the clumsy way they walk around on land. Boobies are most commonly found on the Galapagos Islands, but can also be spotted all over the Pacific region.

There are six different species of booby: red-footed, blue-footed, brown, Nazca, masked and Peruvian. The most common, and most recognisable, are the blue-footed and red-footed boobies, which are found all over the Galapagos Islands. As the name suggests, they both have brightly coloured feet, and for blue-footed boobies, the bluer the feet, the more enticing males appear to females. Their blue feet are part of their elaborate mating ritual, as they flaunt their feet one at a time in front of the female.

Boobies are known for having somewhat elaborate courtship rituals. One, which is known as 'sky pointing', involves the male raising his wings and head and emitting a long, continuous whistle. This is paired with what looks like a sort of dance, as he raises his feet alternately several times (which appears even more impressive when performed by blue- and red-footed boobies). Once this display is over, boobies tend to mate for life and only rarely move on to a new partner.

A rather more unpleasant trait boobies possess is the tendency for 'siblicide', where one hatchling will directly or indirectly cause the death of a sibling. This is most common, and most brutal, among Nazca boobies, who always lay two eggs a few days apart, and the older chick pushes the younger chick out of the nest. It is believed this is some sort of natural insurance policy, in case the first chick doesn't survive. But if the first one does survive, the second one has almost no chance of survival.

Boobies do not tend to fear humans, which means historically they've very easily been captured and eaten by sailors. They would spot a ship and see it as a good place to land while out at sea, and probably soon regret it as they ended up as dinner. In the Galapagos Islands, boobies often make their nests right in the middle of footpaths and so can get trampled on by tourists.

In the Galapagos you can often walk straight past the nests of blue-footed boobies as they make them right on the footpaths.