One Day in Addis Ababa

The city of Addis Ababa, the 'new flower'  in Amharic, was founded in the late nineteenth century and has been developing rapidly since the 1990s. It now has a population of 5 million and is home to the headquarters of the African Union, and more than 100 international institutions and embassies. Considered by some as the capital of Africa, it still exudes the scent of Ethiopia's highlands, between green hills and small villages. Here's how we would spend one day in Addis Ababa.

Running to the top

In Addis Ababa, every morning, at dawn, you'll spot partygoers and runners: as night owls return from the clubs, early risers start their morning ritual. In a country that has been winning medal after medal for 50 years in long-distance races at the Olympic Games, running is a national sport. Following in the footsteps of champions    Haile Gegrebreselassie or Kenenisa Bekele, dozens of men and women train on the streets of the highest African capitals (it is this habit of running at altitude – and their extraordinary mindsets –  that is attributed to the performance of Ethiopian runners). Meskel Square has a multitude of irregular staircase tracks, arranged in a semicircle one above the other, which you walk in a zig-zag until you reach the top. Grab your trainers and join the regulars on their daily jog .

Lucy in the Sky with Diamonds

Visit our ancestor Lucy, a 3.2-million-year-old Australopithecus, discovered in Ethiopia in 1974, and the star of the new paleontology gallery at Ethiopia's National Museum, which opened in 2014, with scientific support from CNRS. Alongside Lucy is Ardi, the oldest known hominid skeleton to date:  4.4 million years old . The gallery also houses Selam, another exceptional fossil discovered in 2000, a near-complete skeleton of a 3.4-million-year-old Australopithecus baby. Alongside them are the oldest representatives of our species, 160,000 year-old Homo sapiens . The museum also presents the impact of the drastic environmental changes of the last millions of years on the evolution of life, with  the objective of raising the awareness of the Ethiopian and international public to this urgently topical phenomenon.

At NetSA Arts Village, founded in 2008 by graduates of the Addis Ababa School of Fine Arts and Design, with support from the Goethe-Institute, you'll have the change to meet with young Ethiopian artists. With concerts, readings, performances, an exhibition of young contemporary artists' canvases, workshops for children, NetSA Arts Village is the place to visit to discover the vitality of contemporary Ethiopian creation. It's also an opportunity to breathe in the heart of the capital:  NetSA Arts Village lies at the heart of a park of over 17 acres planted with olive trees - a rarity in Addis.

To continue your search for green during your 24 hours in Addis Adaba, you can escape to Mount Entoto. Just a half hour's drive from downtown, it's covered with a vast eucalyptus forest and home to several monasteries. Here too, you can meet runners, from casual Sunday runners to professional athletes.  You'll ascend from a windy road, and once you get to the top, you have an incredible view of the city, which allows you to appreciate its size.

During your day in Addis Ababa, watch a Destino show at the Alliance Ethio-Francaise. A contemporary dance company created  by Adissu Demissie and Junaid Jemal, both choreographers born in Addis Ababa, who came to contemporary dance thanks to a programme by British choreographer Royston Maldoom while they were still children, working on the streets. Dance has changed their lives - they now work with international choreographers such as Hofesh Shechter or Saburo Teshigawara. They devote much of their energy and talent to developing choreographic projects with professional and amateur dancers , as well as street children.

Azmari Melaku Belay has mastered dozens of traditional Ethiopian dances, performing them with extraordinary talent. Since 2008, he has directed Fendika Azmari Bet, and has made it a place of artistic renewal, where traditional music is reinvented and enriched, including through collaborations with foreign artists such as the Dutch punk band The Ex or the Red Hot Chili Peppers. There is no better way to end an evening in Addis Ababa than at Fendiqa to see Melaku Belay's crazy choreographies. 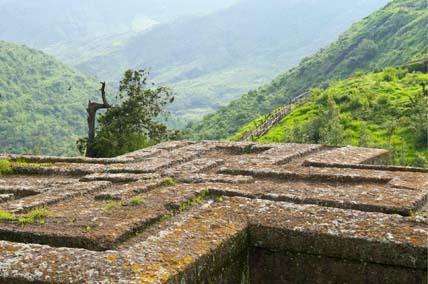