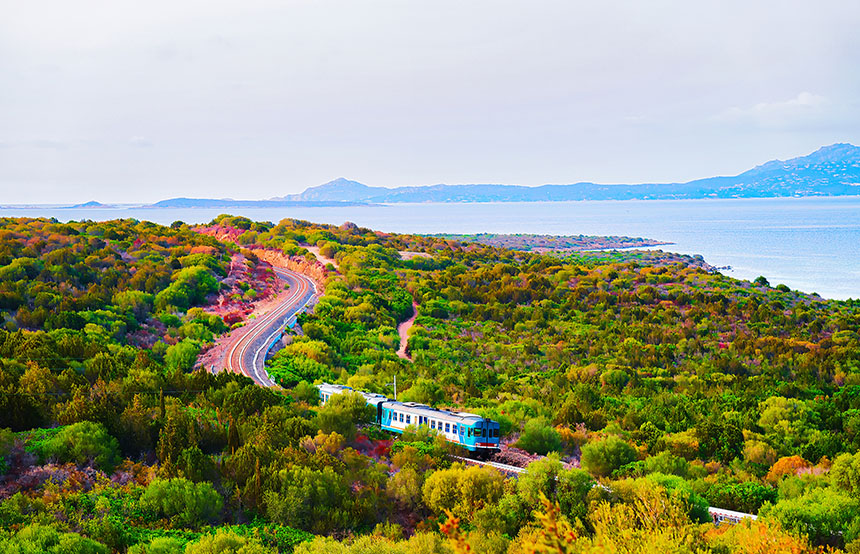 It’s no secret that Italians have a need for speed. But if you thought Ferraris were fast, you’ve clearly never travelled on a Frecciarossa 1000. Connecting Milan, Venice, Rome and Naples at a casual 186mph, it seems that Italians have train travel down. Direct, economical and comfortable, you’ll be able to kick back and relax knowing that if or When in Rome, Florence is just an easy 90 minutes away, and Venice just threehours and 40 minutes. And really, what better way is there to see the country’s umpteen UNESCO World Heritage sites, effortless architecture and lyrical landscapes? Despite the Freccia’s fast and furious tendency to reduce the country’s iconic scenery to an Umberto Boccioni-style blur, if you’re after a slowed down snapshot of the country, there are countless other routes to choose from. Curve around the Cinque Terre’s colourful towns on the Circumvesuviana, feel the sea breeze along Sardinia’s Trenino Verde and let the scent of sweet Sicilian lemons waft through your carriage on the seductive Ferrovia Circumetnea. Read on to discover what we think are the best train journeys in Italy.

Sicily is an island of extremes. It is crumbling columns of the ancient world next to perfectly preserved Baroque paintings, craggy volcanic coasts harbouring sleepy turquoise shores and nonna-perfected pastas on tables next to fresh raw seafood. Its train lines have followed suit. While the main line, which serves Palermo, Messina and Syracuse via Catania, is quick and cushy, the island’s web of secondary lines grant travellers a more authentic Italian experience. Hop aboard the Ferrovia Circumetnea and its vintage mid-20th century railroad car. Follow it from Catania Borgo, around the base of Mount Etna, to the quaint fishing village of Riposto. Soak up the island’s paradoxical panorama, where lunar landscapes of black barren lava meet lush lemon groves and indulge in the simple pleasures of dolce far niente (the sweetness of doing nothing), which practically comes as a requirement on this 30-stop 68-mile line. Seductive, sirenic and oh so photogenic, the Cinque Terre has long past being the secret escape it once was. Attracting almost 2.5 million annual visitors, this colourful cluster of once sleepy fishing villages has quickly joined the ranks of Rome, Florence and Venice. And we can’t say we’re surprised either. When sinuous paths that snake round seemingly impregnable cliffs before plunging into cerulean seas are on the menu, it’s anyone’s game. And thanks to the accessible and streamlined Cinque Terre Express, it really is. Stringing together the cities of Levanto and La Spezia to the iconic Monterosso and Manarola (to name just two) every 15 minutes, village hopping has never been easier. And at just five euros a pop, it’s also great value. Speed past UNESCO-protected vineyards and olive groves, pause at stations shouldered by sounds of lapping pebbles and lose yourself, wonderfully so, down the famous Via dell’Amore (Lover’s Lane) on your arrival into Riomaggiore.

Connecting the heart of the island with its coast for over 130 years, Sardinia’s Trenino Verde (Little Green Train) has remained a firm favourite ever since D.H. Lawrence stumbled across it almost a century ago. Boasting five routes – each as beautiful as each other – which crisscross from Mandras to Sandali and Laconi, Arbatax to Gairo, Sindia to Bosa and Palau to Tempio, you’ll find that Lawrence was quite right in his observation that ‘Sardinia is different’. From the 7000 nuraghi or ‘beehive tombs’ that pepper the island’s wild landscape to the bluer-than-blue beaches that stretch around it, the Trenino Verde promises a front row seat to it all. And while the nearby Costas of Smeralda and Verde continue to remain as alluring as ever, it is the Little Green Train’s ability to take you off the beaten track to hilltop towns and quaint communes suspended in time that make it one of the best train journeys in Italy. The Frecciarossa line from Rome to Milan may lack the charm and character of Sardinia’s Trenino Verde but it doesn’t need it. Reducing a 297-mile journey to just three hours and three minutes, it’s obvious that Frecciarossa’s engineers had only one thing on their mind when they built it: speed. Flying across Parma to Bologna before traversing down to Milan at a whopping 186mph, what the train lacks in glamour it makes up for in views – if you can catch them. Break up the journey in Florence, which devotes itself to all things enchanted and embraces every colour under the sun; or take a leaf out of Journey’s book and catch the midnight train (or the last train of the day at 20:40) and watch the twilight crimsons and mellow pinks of the setting sun dance across your carriage. Now, if that’s not reason enough to be one of the best train journeys in Italy, we don’t know what is.

If, like us, you’re trying to minimize your impact on the environment when you travel (a trend we like to call Travel Less, Travel Better) the Trenitalia from Milan to Lecce is a sure way to do it. Despite taking around eight hours and 45 minutes, this is a journey you’ll want to fight to keep the blinds up for. Calling by Bologna, Bari, Taranto and Brindisi, you’ll be in for a treat as your Spotify-sound tracked stare-longingly-into-the-distance stance becomes shared by sights of ancient towns and the peeping spires of their extravagant churches and olive-green seas. And when you do eventually want to pull the blind down, do so in comfort in the train’s sleeping car, which comes complete with a goodie bag, air-conditioning and breakfast. Have we sold it yet?