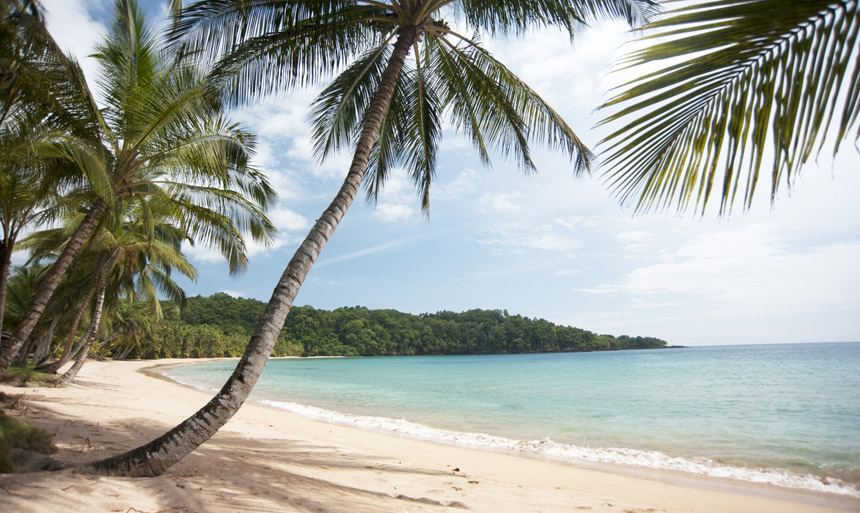 Sao Tome and Principe might not sound familiar, but they're the centre of the earth (literally) and Africa's answer to the Galapagos Islands. Here, discover why the country - home to lush vegetation and divine eco-lodges - is the dream luxury holiday destination.

Holidays to Sao Tome and Principe: An Undiscovered Destination...

I've just returned from Sao Tome and Principe, the (largely unknown) second smallest country in Africa. Often, people have preconceptions of violence and corruption when you think of West Africa - but this is far from the case in Sao Tome and Principe, and remains an undiscovered destination. The two islands are situated approximately 250kms off the coast of Gabon, are about 150kms apart and are nicknamed ""centre of the world"" as it is the nearest land mass to where the equator crosses the zero meridian line. It is this positioning and climate which makes the soil so fertile.

Sao Tome was my first stop. The island is steeped in history dating back to the 15th century, when it was discovered by Portuguese seafarers. The country became an exporter of sugar cane, wood and pepper, as well as becoming a major trading post for the transatlantic slave trade. I stayed at Omali Lodge, a 10 minute drive from the airport and situated right on the beach, just outside Sao Tome town centre. It is the only four star boutique hotel on the island and part of the Africa's Eden collection.

From here we visited local fishing villages, waterfalls in the forests, coffee and chocolate plantations (where I was lucky enough to be given a demonstration on how chocolate is made) and wild beaches. A bumpy road takes you along the coast to the south of the island, where you can visit the town of Sao Joao dos Angolares (descendants of the escaped slaves in the 15th century). The Roca Sao Joao is renowned for serving some of the best food in the country using local herbs, spices and fruit, and the local dishes were mouth wateringly delicious.

It's a 40 minute flight to Principe. As you approach to land you can see why they call it Africa's last Eden. Pristine beaches fringed with palms and mountains covered with totally untouched vegetation are reminiscent of scenes in Jurassic Park. A lot of locations over the world have been labelled ""Robinson Crusoe Islands"" - but Principe really is.

From the airport to Bom Bom Island Resort we followed a dirt track underneath a tall canopy of lush greenery. There are only 21 rooms that fringe the two beaches and hillside, and they have fantastic views down the coastline.

We were welcomed by the very hospitable staff before dumping our bags and heading straight out to Banana Beach for lunch, where we were greeted with a picnic laid out under a Maharaja-style tent nestled amongst the palm trees and looking out over the turquoise waters.

The snorkelling is fantastic and the waters are clear and unspoilt by any huge fishing co-oporations or passing tankers. Bom Bom Island Resort has a great dive instructor, Andre, who claims he is a pirate born 200 years too late. Having started his career in Mozambique, he's more comfortable in the water than on land. He will take all levels of divers and snorkellers out, and point out rare fish, coral and plants. We saw a Nursery Shark tucked away under a huge rock that I would have easily bobbed past had it not been for Andre's frantic gestures for me to come closer.

The activities available on Principe are endless: more plantations to visit, quad biking, trekking, climbing, diving, fishing or simply relaxing on the beach! We took the boat to the south of the island and walked up a fresh water river and swam in the rock pools. On the way back, I asked the guide where the nearest village was, and he told me probably 30kms away! That gives you an idea of how few people there are: 6000 habitants on an island of 142km sq.

There are plans to bring eco tourism to Principe, with two new lodges on the drawing board. The government sees the opportunity which this industry brings: incoming revenue, as well as the opportunity to protect the island's heritage, plants, animals and people.

Sao Tome and Principe offer so much more than just a beach destination. There's culture, history, wildlife and wonderful beaches with so much to see and do. It's set apart from the rest of Africa - there are strong influences from South America, not only in the language but also in the music and food. With the arrival of the two new eco lodges on Principe, and the expansion of the airport, holidays to Sao Tome and Principe are a must.

For more information on tailor made travel to Sao Tome and Principe, contact Original Travel.

Lodges and Resorts in Sao Tome and Principe

A stylish boutique hotel, Omali Lodge is the only 4* hotel on São[...]