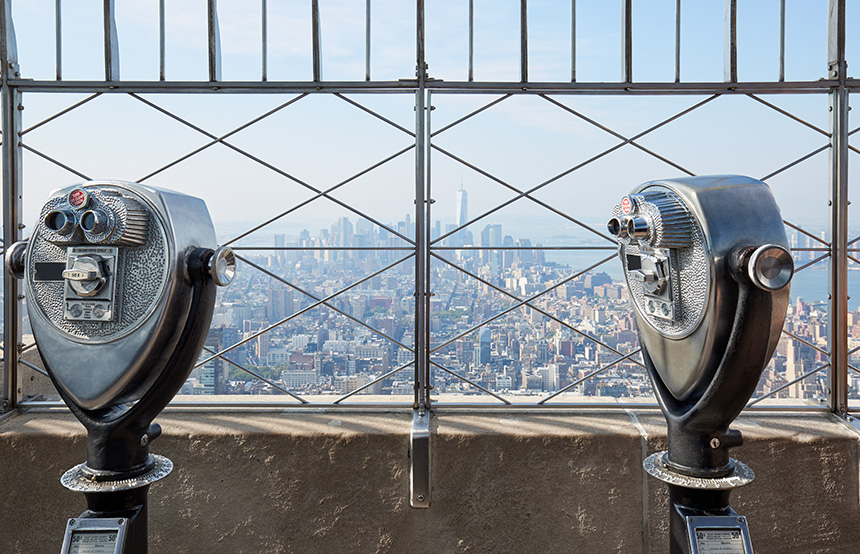 New York is one of those cities you think you know before you’ve even set foot in it. Thanks to John Travolta and The Bee Gees, we already know that Brooklyn’s Bay Ridge is where Saturday Night Fever starts, and Greenwich Village is the place to go for coffee – at least according to the cast of Friends. And while the city’s most decorated director, Martin Scorsese, made us all a little wary of the city’s taxi drivers in the seventies, he was also responsible for bringing the city’s long, varied and dynamic history to life (particularly where gangs are concerned). The thing with New York is that it’s hard for it not to take centre stage. It’s why so many people flock to Carrie Bradshaw’s brownstone on Perry Street, Horseshoe Bar on 108 Avenue B to hear where ‘Michael Corleone says hello’ and FDNY Ladder 8 on North Moore Street for a glimpse of ghost activity. To save you trawling the internet for the addresses of your favourite New York film locations, however, we thought we’d do you a favour and let you in on our favourites below...

There is only one place for breakfast in Manhattan – Tiffany’s. While you won’t find an immaculately dressed Audrey Hepburn ogling at its enchanting window displays – breakfast pastry and coffee in hand – you’ll be hard-pressed not to spot the modern-day Holly Golightlys congregated outside the store with an Ole & Steen Danish at daybreak. Surprisingly, Breakfast at Tiffany’s iconic opening scene is only three minutes long, yet its popularity has inspired even Tiffany & Co to make space for their very own coffee shop, the Blue Box Café. Featuring a menu of steak and eggs, crab muffins, Moët & Chandon and – of course – a croissant box, it is not surprising that Holly believed ‘nothing very bad could happen to you there’.

Immortalised by that scene in When Harry Met Sally, Katz Delicatessen has become something of a mecca for Nora Ephron fans… and those who share Meg Ryan’s passion for juicy hand-sliced pastrami sandwiches. Katz is more than just a film location though; it is an institution that has occupied a spot on the Lower East Side since 1888. And reassuringly, it hasn’t changed an inch since. Apart from the floating sign above the table Ryan and Billy Crystal sat on, its fame has always taken second place to its tradition, which hits you the moment you walk in. From walls adorned with neon signs and pictures of every famous face that has passed through its doors, to its canteen-style counter and tables, which are scarcely empty, Katz is the poster child for New York’s legendary hot sandwiches. It just so happens that a pretty memorable movie scene was filmed there too. What New York-centric film hasn’t featured a wide shot of the Empire State Building? Standing proud at 1,454ft high, with 102 floors and 73 lifts, it’s hard to miss. In fact, it was just two years after its construction that Hollywood decided to use it as the setting for the final scene of King Kong. Swinging off its roof and tip with Fay Wray in one hand while swotting planes with the other, the oversized ape’s rooftop battle became a ground-breaking moment in cinematic history for its use of models and stop-motion animation. Its sleek geometric art-deco design also inspired romcom directors to use it for their films’ pivotal moments. Serving as the meeting place for Annie and Sam in Sleepless in Seattle and Cary Grant’s Nickie and Terry in An Affair to Remember (although – spoiler – she never makes it), it has since become one of the most popular attractions in the city. And for good reason. With sweeping views up to Connecticut and Massachusetts and down past the Statue of Liberty to New Jersey, it can’t help itself but be one of the most impressive New York film locations.

Some New York film locations will take you a bit further afield – like Staten Island for example. Nestled in the middle of its affluent Todt Hill neighbourhood, you’d be forgiven for thinking we’ve given you the wrong address. But one look at the charming eight-bedroom, seven-bathroom house that sits at 110 Longfellow Avenue and you’ll know exactly where you are (and proceed to immediately scramble to your Spotify account to play The Godfather’s Love Theme). Film buffs will clearly recall the famous Tudor frontage as the home of Don Corleone and be happy to learn that it hasn’t changed much since. The backdrop for the opening scene of Connie and Carlo’s elaborate wedding, it does occasionally hop back on the housing market. So, if you’re looking for a New York base, feel free to make them an offer they can’t refuse. Avengers fans, assemble. A New York landmark, Grand Central has, in more recent years, become associated with Marvel’s Avengers franchise. From the unmistakable scene in The Avengers (2012) where the group plot their next move during ‘The Battle of New York’ to the shot of the war’s memorial, which replaces the statue above the building’s Tiffany clock in Avengers: Age of Ultron, it simply attests to the fact there is no better set than New York. Plus, if you’re holidaying with tweens and teens, a visit to the grand terminus is a sure-fire way to get their attention back. Where New York film locations are concerned, this impressive train station scores big. From Friends with Benefits and Falling in Love to Alfred Hitchcock’s North by Northwest, it begs the question – where is the station’s (and city’s) Academy Award?