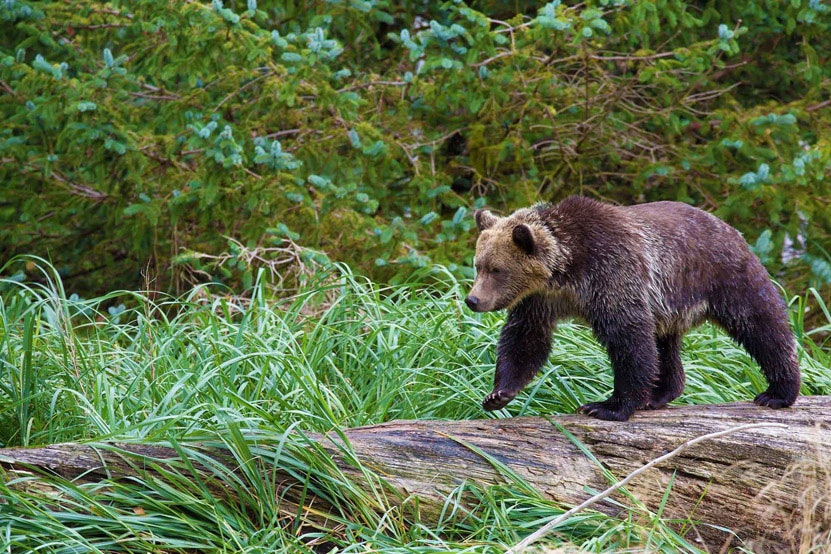 British Columbia has around 16,000 miles of Pacific Ocean coastline (islands included) and endless untamed wilderness that make ideal habitats for the region's magnificent wildlife. By day, head out to spot bears, whales and eagles on foot, by kayak or by floatplane. Come evening, learn about these sacred species' creation stories, as shared around First Nations' (Canada's indigenous population) campfires for millennia...

When considering British Columbia wildlife, first consider the bear necessities. BC's fully grown black bears weigh around 300lbs, while Vancouver Island's coastal grizzlies (brown bears), who are partial to shellfish, weigh in at more like 600lbs. Impressive, when you consider that bear cubs are born weighing just half a pound. To maintain their heft in adulthood, bears have to eat a lot of food - and we mean a lot. That's why every year, when millions of salmon return up British Columbia's rivers to spawn, the bears are waiting. On any given day an adult bear can eat up to 100lbs of fish, snatching the fish from the air as they leap upstream, or 'snorkelling' to grab them underwater. It is an extraordinary spectacle to behold.

British Columbia's coastal waters are home to both transient and resident pods of orcas (otherwise known as killer whales), making this arguably the best place in the world to see these remarkable apex predators. The resident orcas 'speak' to each other using clicks and whistles while hunting fish. On an orca-spotting boat trip you will hear how different pods have developed complex and diverse dialects, and how local marine biologists have learnt to tell the pods apart. If you're really lucky you might see the culmination of a successful hunt, when a pod 'celebrates' with tail slapping, spyhopping (poking their heads vertically out of the water) and making a whole lot of noise.

According to Kitasoo/Xai'Xais First Nations' folklore, when the glaciers and snow from the last Ice Age began to retreat, Raven - creator of all things - brought spirit bears into being to remind him of the ice and snow, and to make sure that mankind would appreciate the bountiful land that had been uncovered. Scientists may now tell us that these are, in fact, black bears whose parents both have the gene for white fur (much like humans with blue eyes or red hair) but we much prefer the ancient myth. Today there are - at most - 600 fully white spirit bears and these ghost-like creatures are extremely shy, so seeing one in the wild is a true travel treat. The good news is that it seems their spectral presence gives them an evolutionary advantage when it comes to hunting. Those same myth-dispelling scientists have discovered that the spirit bears' fluffy white coats makes them much harder for fish to see in daylight than their black-coated brethren, so they can hunt during the day with far more success. This is a crucial competitive advantage during the brief five-month period they are out of hibernation, when the bears have to eat vast amounts of fish, berries and nuts a day to put on enough weight to last them through their long hibernation.

The Eagles of Haida Gwaii

Bergmann's rule states that individuals of any given mammal or bird species tend to be larger in colder climes than in warmer regions. This zoological phenomenon is all to do with surface area relative to volume and staying warm, apparently, but all you really need to know is that the bald eagles in the Haida Gwaii archipelago - 3,500 miles north of the equator - are positively gargantuan. Some have wingspans of up to 7 feet and at certain times of the year, on a guided walk through the remote island forests, you can look up and see a convocation (one of our favourite collective nouns) of hundreds of bald eagles riding the thermals overhead.

Thinking of booking a trip to discover the British Columbia wildlife? Get in touch and we'll be happy to help.