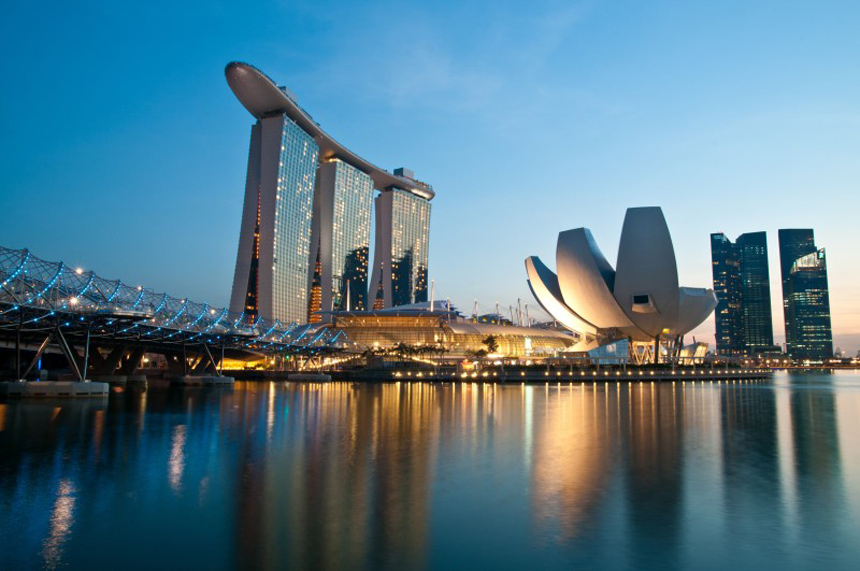 Bangkok or Singapore? One is the capital of the vast kingdom of Thailand, proud of its traditions, while the other is a micro-state at the cutting-edge of the modern world. Both are the gateway to many more discoveries. Which one will you choose ?

Battle of the airports

Bangkok's new Suvarnabhumi international airport initially struggled to get off the ground, but now operates at full capacity and welcomes nearly 60 million passengers every year. It is immense, more than 7,400 acres, 1,400 feet long and 36 feet wide, and has the highest control tower in the world standing at an impressive 433ft tall. However, this does not stop it from struggling to regulate its traffic and suffering from a few jams, without overcoming the endless queues and rushes that they generate. Slow customs clearance can feel exasperating after an 11-hour flight and a night of broken sleep. Baggage reclaim also requires a lot of patience. Passengers who want to reach their hotel by shuttle bus or taxi must have money on them.

In Singapore, Changi airport also welcomes around 60 million passengers every year and with impressive organisation. Carpeted floor encourages a peaceful atmosphere, combined with a rooftop swimming pool, giant aquarium and orchid garden. It would be nice to stay a little longer, but the quick customs clearance provided by an army of civil servants, and the incredibly efficient baggage reclaim process mean there's very little time to spend hanging around. It is no wonder that it is regularly voted as ' }the best airport in the world '. A well deserved title.

Direct to the city centre

Suvarnabhumi airport is 20 miles from central Bangkok. A train can take you there in 30 minutes. However, if this is your first time, we recommend taking a taxi (drivers wear white gloves ), which drops visitors off in front of their hotel. However, you must have some Thai bahts, the local currency. One pound = 40 bahts. Cars have meters and the trip is usually about £15. But patience is needed for the endless traffic jams on the motorway, especially in the morning. If you're arriving early in the day, it's also worth noting that hotel rooms are unlikely to be available until 14:00.

Singapore International Airport is about 10 miles from the centre. An easily accessible and visitor-friendly express train connects in 20 minutes. The journey is a similar length in a taxi (all have meters), which will cost approximately 20 Singapore dollars (1 pound = SGD 1.79). Smooth roads are relatively free from traffic jams and lined with colourful flowers, meaning the journey is scenic and offers a degree of serenity after such a long flight (11 hours).

One is turbulent, the other terribly smooth. Marvel at the organisation in Singapore. It is home to straight avenues, careful drivers, pristine sidewalks, giant and trendy billboards, a forest of methodically planned buildings, chic boutiques and artistic neon lights. It is the Asian version of Switzerland with Chinese touches. It is a pleasant and reassuring sight for the eyes.

Bangkok, on the other hand, is brilliantly chaotic. There can be traffic jams, pollution visible to the naked eye, armies of tuk-tuks (mopeds equipped with a platform to carry passengers) buzzing around, crowded pavements where you can buy everything from cigarettes to counterfeit watches, bric-a-brac stalls and street food. This is a spontaneous urban chaos that's proof of real life and a real city.

A Night in the City

Bangkok and Singapore are both home to large chain hotels, historical jewels (Oriental in Bangkok, Raffles in Singapore), modernist creations (Marina Bay Sands in Singapore, Sofitel So in Bangkok), charming houses and hotels perfect for business trips. Both capitals have a similar offering, with a much more attractive range of prices in Thailand than in Singapore. Add premium comfort, benchmark service and the recent proliferation of rooftops in both cities.

Exploring the City: There's a Lot to See

On the one hand, Bangkok, a city of 579 square miles and a conglomeration of 20 million inhabitants. On the other hand, Singaporeis half the size and barely has 6 million people. If we add in urban planning to the mix, it is, to say the least, chaotic in the former and totally under control in the latter. As a result, congestion is considered normal in Bangkok whereas Singapore's traffic flow is impeccable. Bangkok has reduced car strain with the introduction of an aerial metro, which is modern, inexpensive, comfortable and served by helpful, bilingual staff. Make sure you consult your map before you use it so you can work out the stops and changes. Don't miss an experience to ride in a tuk-tuk to get around the traditional way, with the wind in your face. And be prepared to barter. Otherwise, hop into taxis, with or without a meter. You can easily negotiate the cost of the trip. In Singapore, all taxis display their fares and are air-conditioned.

Street life is dense in both cities, but totally different. In Bangkok, the mixed crowd of younger people, grandmas broken under the weight of baskets to balance or putting their vegetables in the wok, countless employees, executives always in a hurry, llamas with shaved heads, dressed in saffron or red robes, schoolchildren in clusters, pop-up stalls... In Singapore, everything is much more ordered and calm. There are no stalls or vendors except permanent shops. In short, each destination has its own style. Bangkok will delight those who are looking for exoticism, whereas those who find order and cleanliness reassuring will fall in love with Singapore. Remember to pack an umbrella for either destination. In Bangkok, but especially in Singapore, it is rare to have an evening without the odd sudden downpour.

Both have a reputation for culinary excellence, with mouthwatering Thai recipes on one side and Chinese delicacies on the other. However, each destination also has its local specialities. For example, Bangkok embraces street food. There isn't a single street that doesn't have soups and broths simmering over a fire. Neighbours work together to cook delicious creations; it's a lively and inventive experience. Alongside traditional restaurants, Singapore has always been fond of ' food courts '. These are outdoor sites (the latest of which are topped with a roof, great for when it rains) which feature numerous stalls, each with its own speciality - Chinese, Thai, Malay, Indian, fruit, ice cream, pastries, etc. Choose your dishes before settling down at the tables set up in the centre of these traditional 'hawker centres'. Note that the two cities have only recently discovered the glory of wine. However, the bottle prices are high. Traditionally, meals are accompanied with beer, tea or water. The Chinese community also enjoys cognac with their meals.

Tour guides barely know where to begin to show off Bangkok. The city is full of treasures and a week is barely enough to see the main sights. Let's begin with the temples, the most spectacular is the Emerald Buddha, in the grounds of the immense royal palace, in the heart of the city. There are at least a dozen other temples that are worth visiting. All are home to their monastic community and welcome hundreds of worshippers every day. The offerings and incense smoke are testament to this. Another must-do is boating on the 'klongs', the network of canals that irrigate the city from the Chao Phraya River. As a couple or group of four, rent a long tail boat for two hours and discover the real life of the capital, that of the people who live by the water, with their groceries, floating kitchens and small markets. It's a fascinating insight into Bangkok. Let's not forget about shopping, silk mainly, as well as in the narrow alleys of the huge weekend market, Chatuchak, an Ali Baba-style cave where treasures can be found. Finally, enjoy the lively, atmospheric nights on street level (Khao San Road, for example) or from the rooftop of skyscrapers such as the Banyan Tree Hotel.

You can't beat it. Singapore is slightly behind in this area. Tour guides favour the Museum of Art, strolling through its huge shopping centres (Orchard Road) or walking the paths of the spectacular Gardens by the Bay artificial garden. The botanical garden and its orchid conservatory is a must-see, it's the best in the world. The lively ' typical ' neighbourhoods of Chinatown and Little India are steeped in history. Finally, climb to the top of the Marina Bay Sands Hotel ( 2,560 rooms on 57 floors, 656ft tall) to dive into one of the largest swimming pools in the world - it covers the roofs of three buildings and is nearly 500 feet long. There's the added bonus of magnificent views of the city, but you have to pay to enter. With your feet firmly on the ground again, there's the pleasure of a giant shopping centre, a spa, 20 restaurants and even a casino.

Bangkok is a destination in itself. Before exploring Thailand, you can stay there for a good week or even more which is common and made easier by a very affordable cost of living. Not everyone, however, can stand the constant whirlwind, the stifling pollution and the communication barriers since few Thai people speak English. In stark contrast, Singapore and its Western vibes, revised by Chinese precision and organisation, rarely generate such emotions. On the other hand, it's a perfectly functional city. It's impossible to get lost, everyone speaks English, and there's no shortage of information. As a result, prices are practically at Western standards. So we'd suggest spending two or three days here to cover the essentials, then move on.

Both cities stand out as important regional hubs. Singapore serves Indonesia in general very well, and Bali and the Sulawesi in particular. There are numerous daily low-cost flights. Its airport is also used to reach the Philippines or the capitals of Indochina. Not to mention… Bangkok is well serviced in terms of flights but also by the very chic Orient-Express train. From Bangkok, visitors usually go to the northern provinces (Ayutthaya and Chang Mai) as well as popular beach resorts, such as Pattaya, Phuket and Koh Samui. However, the airport also offers convenient and inexpensive connections to Yangon in Burma, Vietnam, Cambodia and Laos. 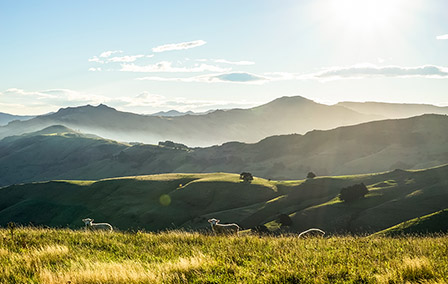 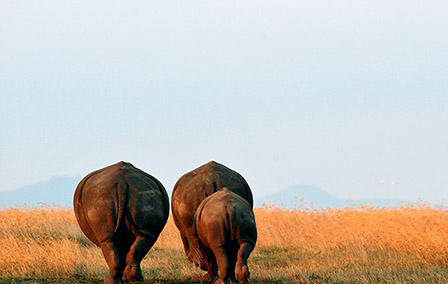 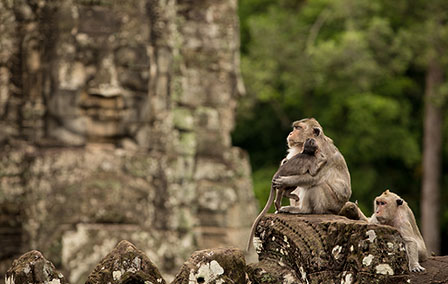