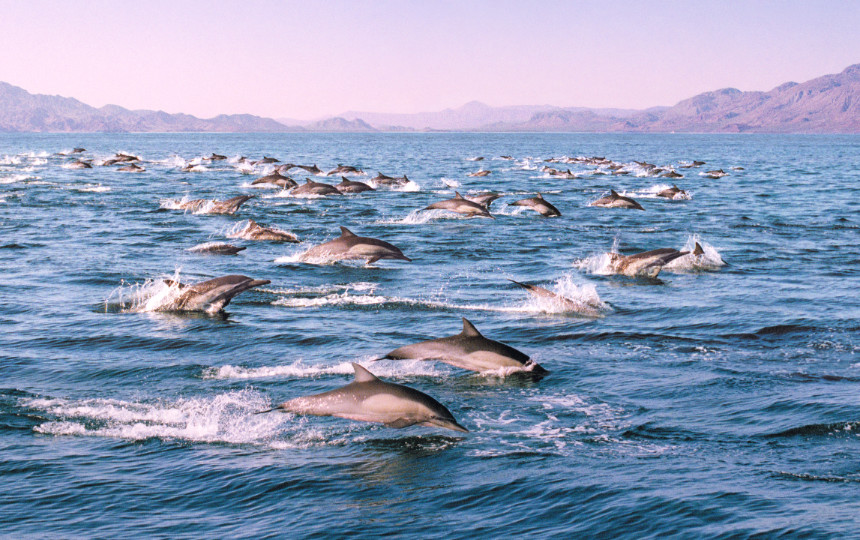 Dolphins are some of the most intelligent, social and fascinating marine mammals on the planet, with over 40 known species inhabiting the underwater world. Famed for their friendliness towards humans, they’re also integral to the survival of the whole marine ecosystem, and their playful nature places them high on many people’s wildlife watching bucket lists. Bottlenose dolphins are the most common, however in more remote corners of the world you’ll find an array of other intriguing species, including pink dolphins deep in the Amazon and hourglass dolphins in Antarctica’s Southern Ocean. Catching sight of a pod leaping through the waves is a holiday memory you’ll never forget, so we’ve compiled a list of the best places to see dolphins if you’re hoping to spot these extraordinary animals in their natural habitat.

Located 900 miles to the west of Portugal, this Atlantic archipelago of nine islands is home to over 11 cetacean species, with pods comprising as many as 1,000 dolphins. Thanks to the dense population of dolphins inhabiting the Azores’ deep blue waters, this is one of the best places to see dolphins in the world, and with the region’s mild climate, you can visit at most times of the year. Bottlenose and Risso’s dolphins are endemic to the islands, while Atlantic spotted and striped dolphins migrate to the region during the warmest months. The diving here is also renowned for being some of the best in Europe in case you fancied getting even closer to these fabulous creatures.

Further afield, but certainly worth the travel time, large pods of dolphins are also found in Hawaii (it’s common to witness hundreds gliding through the ocean in perfect harmony). Comprised of eight main islands and a handful of smaller ones, Hawaii’s warm, clear waters are home to the fascinating species of spinner dolphins, so-called for their tendency to perform acrobatic displays. While there are now rules in place to protect this population of wild dolphins, there are still opportunities to view them safely from most of the main islands. Other marine mammals inhabiting the Pacific Ocean include pantropical spotted dolphins, melon headed whales and short finned pilot whales, and the archipelago’s colourful coral reefs are ideal for diving and snorkelling.

A holiday to Hawaii can be perfectly combined with a visit to our next dolphin-spotting destination, California. The stretch of coastline between San Diego and Santa Barbara plays host to one of the densest dolphin populations on the planet and the most common type here is the aptly named ‘common’ dolphin (although we can assure you there’s nothing ordinary about watching them coast through the surf). ‘Stampeding’ is a frequent occurrence here, which involves thousands of the marine mammals forming ‘megapods’ to traverse longer distances across the ocean. The Golden Coast is another superb spot for whale watching, and marine wildlife tours can be arranged as part of your holiday itinerary.

For those willing to travel the distance to the Southern Hemisphere, New Zealand is another stand-out location for wildlife watching. In Kaikoura, you’ll find one of the world’s smallest cetaceans, known as ‘Hector’s dolphins’, which can be spotted around the South Island at most times of the year. This rare dolphin species is native to New Zealand, although they are now protected by a marine mammal sanctuary in Akaroa Harbour due to their endangered status. Closer to the North Island, there are high chances of spotting common and bottlenose dolphins in the Hauraki Gulf Marine Park and dolphin-watching safaris are a popular activity here.

South Africa’s Plettenburg Bay is a world-renowned destination for wildlife-lovers and worth taking note of if you’re in search of dolphin watching. Humpback whales can also be seen migrating through the bay from June to September and this is a prime time for catching sight of a wide array of aquatic creatures. In Cape Town, the ‘sardine run’ phenomenon sees hundreds of whales, dolphins, sharks and pinnipeds flocking to the region, as billions of forage fish travel towards the Eastern Cape. Since this relies on complex current patterns it can be difficult to predict its timing, but the spectacle generally occurs between May and July.

Another location closer to home, you’ll find a range of dolphin species (including striped, bottlenose, Risso’s and rough toothed dolphins) roaming the Ionian Sea off the coast of southern Italy. Here, the Jonian Dolphin Conservation has carried out extensive research into protecting the dolphins which inhabit the Gulf of Taranto and they offer eco-tours which aim to both support their research and educate tourists about conservation efforts. Taranto, located in Puglia (the ‘heel’ of Italy’s boot), is known as ‘the city of two seas’ and a stay in the charming coastal enclave can be combined with visits to Bari, Lecce and even the iconic Amalfi Coast.