On the surface, Stockholm is the image of tradition with its green copper roofs and medieval old town, but look a little closer, and you’ll discover that the Swedish capital is bursting with creativity and culture from the fashion, architecture and music, to the museums, institutions and secret spots. Built over 14 islands, and surrounded by the sea, nature is ever-present in Stockholm. To make the most of the city, we’d recommend visiting Stockholm at least twice: once in winter, when you can skate on the city’s frozen lakes, and once in summer, when you can set sail and make the most of the surrounding natural landscape. But if you just have 24 hours in Stockholm, how should you spend it? Read on for some of our top suggestions…

Get lost in the heart of the city

Kick off your day with a morning walk around the tiny island of Stadsholmen, where you’ll find the old town - Gamla Stan – and its pretty cobbled streets, green-grey bell towers and impressive buildings such as the Royal Palace. Take a stroll to Stortorget Square to gaze at the Dutch Renaissance-style houses, with their coloured gables in pinks, reds and yellows, and don’t miss seeing the City Hall, which has an almost Venetian air about it.

Next, head to the neighbouring island of Skeppsholmen and take the path to the museum which is dotted with sculptures created by Jean Tinguely and Niki de Saint Phalle. Its permanent collection of 20th-century art (including works by Dali, Picasso and Matisse) places it among the most prestigious museums in the world.

Fika – or just kaffe (meaning coffee) – is the name given to the Swedish tradition of enjoying a coffee and cake break with colleagues, friends, family - a cultural institution in a country where taking time away from work to relax, indulge in hobbies and spend time with loved ones is all part of the culture. We recommend enjoying your first fika trying a Kannelbullar, (a cinnamon bun covered with large lumps of sugar) at the Sturekatten café – which has been open since the 18th century.

Perched on a hill in Djurgarden, the Skansen Open Air Museum is like a mini version of Sweden, dotted with churches, workshops, mills and granaries. The houses, with their traditional birch bark roofs, are completely furnished and decorated, and look so lived in, it’s easy to forget they’re not actually inhabited. Other museums in Djurgarden include the Vasa Museum, which is home to the only preserved 17th-century warship in the world, and the ABBA museum, which is well worth a visit for die-hard fans. And if you’re in Stockholm with children, we’d also recommend a visit to Gröna Lund, the oldest amusement park in Sweden.

12 miles from the city, on the island of Värmdö - which is accessible by ferry - head to Artipelag, an incredible museum created by Björn Jakobsson (the founder of the BabyBjörn brand), which offers the perfect opportunity to admire the landscape around Stockholm and out into the Baltic Sea. The museum is in an ultra-contemporary 108,000 square-foot-building which is set on a peninsula in the middle of the pine forest and designed to blend into the surrounding scenery with its huge windows which bring the outside in. Go there to enjoy its fantastic exhibitions and the magic of the site itself. Stockholmers love to visit the museum, have lunch there and hike along the surrounding paths, so we recommend doing just that!

Fotografiska: The Museum of Photography

Fotografiska is the first and only museum dedicated to photography in the city and is located in an old industrial building right on the waterfront. The beautiful Art Nouveau brick facade has been preserved, but the interiors have been completely redesigned by AIX Arkitekter and Guise Studios. It hosts four large and around 20 smaller exhibitions per year, featuring a mix of Swedish and international photographers (previous exhibitions have included the likes of Annie Leibovitz, David LaChapelle and Helmut Newton). Once you’d had a look around, we’d recommend heading to the café on the top floor for one of the most beautiful views of the archipelago.

The love of antique and vintage pieces is more than just a trend in Stockholm, it’s part of the culture of the city. Collectors and enthusiasts will love exploring Östermalm, one of the most famous areas in Stockholm for antiques, particularly Sibyllegatan street. With its 20th-century Scandinavian designs, ceramics, lighting and thrift shops, you’ll wish you had more space in your suitcase!

In the south of Stockholm, the island of Södermalm has become the creative heart of the city. The district of SoFo (South of Folkungaggatan) is home to creative concept stores, cool cafés and delis, fun bars and vintage thrift shops and is considered one of the trendiest districts in the city. Spend the evening exploring the area, stopping off somewhere for a drink or heading up Mariaberget hill for a panoramic view of the city as the sun is setting.

Round off your 24 hours in Stockholm by enjoying a tasting menu at Gastrologik, a restaurant whose menu is based on local seasonal products cooked up by master chefs specialising in Nordic gastronomy. Set in a bright white and copper space, designed by the architect Jonas Lindvall, this beautiful setting is the perfect place to end your day. 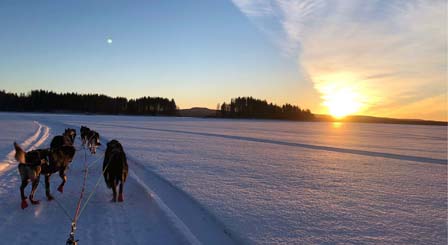