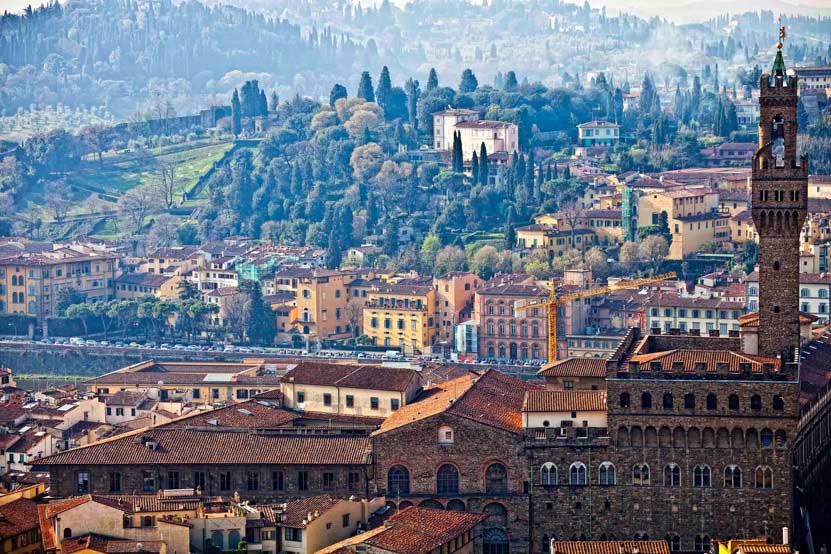 The days of the Grand Tour may have passed, but 60 million people visited Italy in 2017, and you can bet that a significant chunk of them (according to a very scientific straw poll at Original Travel HQ) went to Florence or Rome, or both. Since both cities are prime Big Short Break territory and Original Travel is nothing if not a gaggle of Italophiles, it seems only right that we pit the two cities against one another and see who emerges the victor...

Giotto, Brunelleschi, Pisano, the list of Florence's architects reads like a who's who of Italian Renaissance and Romanesque heavyweights. It is almost impossible to round a corner in Florence without stumbling across a spectacular example of architectural brilliance and, as Lucy Honeychurch (of E.M. Forster fame) reluctantly discovered, guidebooks are superfluous when you are surrounded by such beautiful buildings (though we would certainly recommend a walking tour to get to grips with the really important bits!). From the Duomo to the Ponte Vecchio and the sprawling Pitti Palace, Florence's architecture is pretty great.

200 miles south and the Pantheon, built by Hadrian and arguably in much better nick than his wall, is just one example of the magnificent Roman architecture spread across the city. Romans aside - most of their buildings would fall more under the umbrella of 'ruins' at this point, after all - the Eternal City plays hosts to masterpieces of Baroque theatre. A prime example is St Peter's Square, designed by the king of over-the-top architecture, Gian Lorenzo Bernini; there isn't a detail in the square that has been overlooked, from the four-deep colonnades which welcome visitors into the arms of the Mother Church to the travertine paving stones which break up the ocean of cobbles.

If you are at all peckish, look away now. It would be remiss of us to compare Italian heavyweights without a foray into their foodie offerings. A predilection for tripe-based dishes aside (nobody's perfect), both Florence and Rome bring their A-game to the Italian food fight. Florence's flagship dish - if we had to choose one - has to be bistecca alla Fiorentina. The enormous T-bone steaks are cooked over chestnut embers and, though they could easily leave a family of four feeling comfortably full, are well worth a solo attempt, although you probably won't need to eat for a couple of days afterwards. Other Florentine food favourites include pizza from Gusta Pizza - get it to take away and eat on the piazza by the Pitti Palace with a bottle of house red - and, of course, breakfast at the Caffe Gilli.

Pizza bianca, eaten fresh from the ovens of any local bakery in Rome on the way to work or school is as much a Roman institution as a Mr Whippy on a windswept beach in the UK is. Another firm favourite are the first broad beans of spring eaten with chunks of pecorino straight from the wheel. Poke your nose through the door of any bar or trattoria between March and May and you'll likely see groups of men huddled around a block of cheese, shooting the breeze and slipping beans from their skins as they go. If you ask nicely enough, you might even be allowed to join in.

No visit to Italy is complete without a little souvenir shopping, whether your budget will stretch to an original Renaissance masterpiece or can only accommodate a novelty David apron. Tuscany is the home of Italian leather and as the countless shops and market stalls that line Florence's streets will attest to, demand for Italian leather only grows. The best spot to pick up a few bits is Scuola del Cuoio - a leather working school set up to help Florentine orphans after the Second World War. The shop seems to sell every leather good imaginable - from beautiful woven handbags to elegant diaries - all handmade in the adjoining workshop, which is well worth a tour.

Meanwhile, Rome's Piazza da Spagna is perhaps the most famous row of shops in the world. Sermoneta Gloves at number 61 is the place to go to buy exquisite leather gloves, fitted to your hands, before having a poke around the small boutiques and big-name designers whose shops line the street.

Just wandering the streets of Florence and Rome is enough to absorb centuries of culture, but a few highlights from the cities' cultural calendars stand out. Florence's moment comes with the Scoppio del Carro; every Easter Sunday an ancient (really, it dates from the Crusades) cart is pulled through the streets of Florence to the Piazza del Duomo where a - presumably very nervous - priest fires a mechanical dove at the fireworks on the cart, which then light up the square. It is said that if the dove fails, disaster will befall the city, and Florentines take this ominous threat very seriously; the last time the fireworks failed to light the Arno flooded leaving behind mudslides 10ft deep.

For something a little less life-and-death, head to Rome for Giornate FAI - one weekend a year (usually in March or April) when the city persuades the owners of the city's most beautiful private homes and buildings to open their doors to the public. This is the perfect opportunity to snoop around the homes of Rome's great and good, many of which have hardly changed since the Renaissance, with the exception of adding indoor plumbing and electricity.

So in conclusion, Florence just shades it on architecture and food but Rome reigns supreme for sheer variety of shopping and culture.