Sweden is known for a lot of things: excellent design, an unfairly tall and attractive population, ABBA and... food. On a recent foodie trip to Stockholm, our Sweden expert, Ella, fell head over heels for their incredible food culture and returned convinced that despite its small size, you'd be hard pressed to find somewhere more innovative when it comes to cuisine. With that in mind, see below for a few ideas on how to eat your way through the city...

Spend a Day in Museums

Stockholm is home to many, many museums. As we worked our way through innumerable venues of culture, I was delighted to discover that lots of Stockholm's museums also have excellent restaurants. First stop for a lovely lunch: Nationalmuseum. Following a five-years refurbishment, it reopened its doors in 2018 with three times as many objects on display. After looking at that much art I felt I had definitely earned a sit-down in the restaurant which serves classic Swedish dishes with a modern twist. Next, for a late afternoon tipple with added culture, make your way to the Spritmuseum where you can learn about the country's history with alcohol, learn a schnapps drinking song to put in use when you sit down for a tasting tray and line your stomach in their (amazing) restaurant, Seaside Dock. End the day in Fotografiskan (pictured), a photographic museum whose restaurant was named the best museum restaurant in the world (warning: book ahead for dinner at the weekend)! They offer up wonderfully fresh, organic dishes and pride themselves on letting nothing go to waste from bread transformed into beer to vases constructed from wine bottles.

Spend a Day Being Vegetarian

When you only have a few days in a city, it can be hard to pick where to eat. What if it doesn't live up to the hype? What if its great but you order the wrong thing and you have to sit there staring enviously at everyone else's food? An easy solution is to go on a Stockholm food tour. We opted for the vegetarian tour, partly out of curiosity and partly because Stockholm is home to what is supposedly one of the best vegetarian food tours in Europe. We dabbled in everything from zero-waste cuisine made from donated leftovers to the vegan offerings at Chokladfabriken, whose treats have even made appearances at royal weddings. A particular favourite was Kalf and Hansen in Stockholm's trendy Sofo neighbourhood; if you don't take a tour, this is an absolute must-visit. To keep the veggie theme going, we rounded off day two of our tour with a mega eight-course dinner (and 'from-the-garden' cocktails) at Rutabaga. The chef Matthias Dalgren is something of a superstar in Stockholm's dining scene with a cumulative four Michelin stars earned at three restaurants to date, and unsurprisingly the food at his latest venture is delicious.

Spend a Day Out of the City

One of the best things about Stockholm is how easy it is to get out of it. The city itself is built across 14 islands, but the wider archipelago is made up of some 30,000 plus, meaning you can escape to what feels like untamed wilderness in half-an-hour or so. We spent our last day in Stockholm island-hopping - the perfect way to round-off our city break. Our first stop, aboard a private boat, was Northern Varmdo, the home of Fredriksborg Hotel and restaurant. An old military fortress established in 1724, it now makes for an excellent lunch spot. From here, it was a short hop to Vaxholm, one of the biggest and most populated of the islands with a charming old town characterised by sweet wooden houses, windy lanes, little harbours and a sprinkling of Scandi-chic stores and cafes. It makes the perfect setting for learning the secrets of one of the most iconic Swedish goods, the kannelbullar (cinnamon buns), with one of Sweden's best home bakers - think Great British Bake Off but taken a bit more seriously. The foodie fun wasn't over yet. Our next island was Vaxholm's opposite - privately owned, with a maximum capacity of 16 guests at a time across eight luxury eco tents. It was a bit too late in the season for an overnight stay and sadly the floating sauna and wood-fired hot tub were already in hibernation, but we did get treated to a wonderful dinner cooked out in the open (complete with ingredients foraged from the island itself). At one point it started to rain but tucked-up as we were beneath the canopy, full of home-made food and equipped with a glass of wine, this just added to the cosy atmosphere even more. It was with great reluctance that we left in favour of our hotel back in the city. However, as we were heading further west in the morning, it did make sense to stick a bit closer to the train station. After all, this trip was about eating our way across Sweden, not just Stockholm...

Want to book a trip to discover Stockholm food? Get in touch and we'll be happy to help! 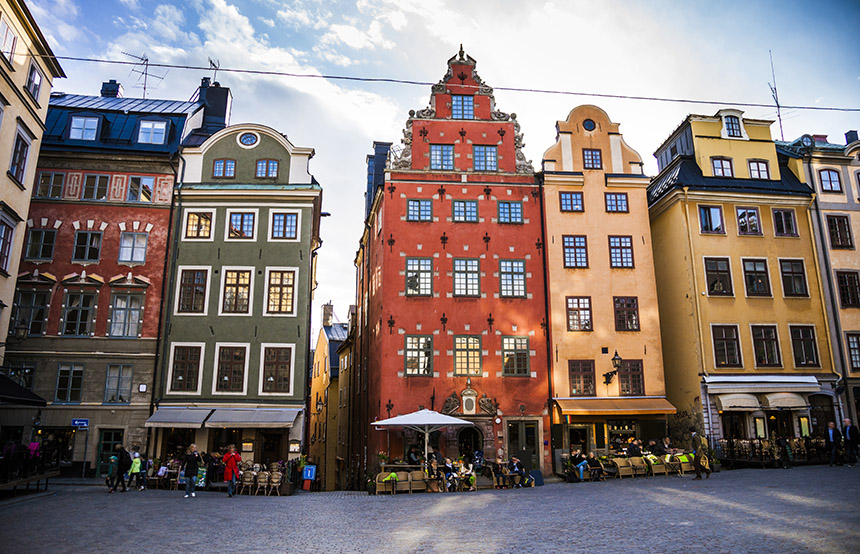