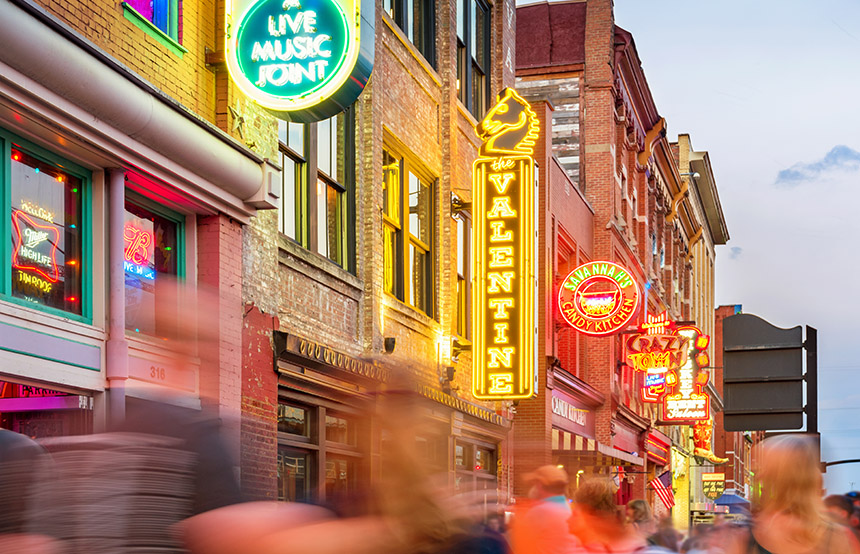 Reducing the capital of country to 24 hours is a mighty challenge. The home of honkytonks, hot chicken, and Dolly Parton, Nashville is truly a city unlike any other. Its continual stream of hen parties, country music stars, and their fans means the city never sleeps. But there are only so many hours in the day. And if you’re travelling to Nashville, you’re probably heading on to a neighboring state’s cosmopolitan city soon after, so we understand. That’s why we’ve decided to create an expert guide on how you can spend 24 hours in Nashville…

Nothing says morning in Nashville quite like hot biscuits and gravy. Beat the morning rush to the Loveless Café, where the biscuits are hot and coffee drips all day. Bask in its big-hearted Southern hospitality and be charmed by its friendly locals as you tuck into the famous Music City Platter. From here, we recommend heading back into the city centre, over the John Seigenthaler Pedestrian Bridge to the hipster haven of East Nashville. Home to the Tennessee Titans, as well as a plethora of quirky (and very Instagram-worthy) murals, contemporary galleries, and vintage clothes stores, it is Nashville’s designated creative quarter and the perfect place to pick up some last-minute holiday mementos. It is also known for its eclectic and artisanal coffee scene if you’re still in need of a caffeine fix.

Nashville’s country cool neighbourhoods hit all the right notes and The Gulch is no different. Southwest of East Nashville – just below SoBro (South Broadway) – it is one of the city’s most recent urban developments. Once a cluster of disused warehouses, it’s now home to pretty much everything. From the 36 beer taps of Hops & Crafts to the mouth-watering almond-cherry chocolate bark of Colt Chocolates and the locally owned Nashville Boot Co, where there really is ‘nothing like a good pair of boots’, it is the native Nashville haunt – especially on weekends.

Lunch should always begin with an H – H for Hattie B’s that is. While its round-the-block queues probably won’t tickle your tastebuds, its popularity is a sign of how much it is worth waiting for. Sink your teeth into a plate of ‘Damn Hot’ wings, with sides of dirty bird fries, pimento mac and cheese, and pickles, and wash it down with a gallon of freshly squeezed lemonade. You’ll need it too – Hattie B’s is thirsty work. If you visit their midtown location, you’ll also find yourself just a hop skip and a jump away from Nashville’s centerpiece, the Country Music Hall of Fame.

Country music is like marmite. You either love it or hate it. But Nashville’s Country Music Hall of Fame is a must-see for everyone. Prepare to lose a couple of your precious 24 hours in Nashville as you walk through exhibitions showcasing the genre’s origins and celebrating icons such as Johnny Cash, Elvis Presly, and even Taylor Swift. It is truly a treat for the senses too, featuring never-seen-before artefacts, original recordings and interactive media displays. And if that’s not enough, there’s a shop, a 19th-century print store, where you can buy custom-made prints, and a café offering light snacks and beers.

Nashville really comes to life once the sun goes down. After a couple of craft cocktails and appetising entrees at the characterful Skulls Rainbow Room – which has entertained the likes of Paul McCartney, Etta James, and Bob Dylan – your appetite will feel suitably whetted to take on the whisky-scented neon-lit Honky Tonk Highway. While the toe-tapping tunes of spindly guitars and electric harmonies will reach you before you even turn into Lower Broadway, you’ll probably find yourself unable to stop. Cavort with cowboys in Robert’s Western World, learn how to line dance in The Stage, and shoot some whiskeys in Nudie’s rooftop bar.

However, if you fancy a more intimate introduction to country music, there is no better place to visit than The Bluebird Café. Iconic and intimate, with only 90 seats, you’ll find the last of your 24 hours in Nashville soon slip away as you hunker down for an evening of stories and sounds from some of the best country songwriters in the world.