Long-overshadowed, unfairly, by cities like Cusco or Arequipa, Lima has become a popular destination for travellers, combining an easy-going atmosphere and luxury hotels.  We love the remainders of its multicultural past and traditional way of life, and applaud the capital's cultural renaissance. It is also one of the world's leading gastronomic capitals, which will appeal to foodies and gastronauts. So here's how we recommend you spend 24 hours in Lima...

Partially destroyed in 1746 by an earthquake, Lima's historic centre - a pure product of the Spanish Golden Age - got off lightly. Lose yourself in narrow streets lined by houses with aging walls of olive green, pale yellow or pink, and wooden balconies. At the Plaza de Armas, admire the lines of the Baroque buildings and the palaces representing the three powers: the cathedral, the government palace, and the municipal palace.

Set in the vast white home of an extravagant pair of collectors from the last century, opening onto a lush garden, the museum holds the most beautiful collection of works from the era of the country's Viceroyalty (17th and 18th centuries). See furniture inlaid with mother-of-pearl, gold leaf altarpieces and the canvases of the Cusco school, which are sublime.

Taste the best ceviche in the world

The best ceviche in the world is at Javier Wong : a small cevicheria with an open kitchen, and no sign. Javier tops the raw sole, seasoned with lime salt, black pepper and red onion, with cooked octopus.

In the heart of this supercity, 350 'huacas', remnants of sacred buildings dedicated to religious and funeral ceremonies, are often attached to buildings, and some even destroyed as urbanisation continues apace. Between San Isidro and Miraflores, you can find the Huaca Pucllana, a pyramid of adobe bricks built during the time of the Wari civilisation between 800 and 1000 AD. What was considered 40 years ago as a mere heap of land, occupied by poor families, is now a world-class archaeological site. In 2013, archaeologists made a major discovery : the pre-Columbian mummies of a child and an adult, intact.

Have a drink by the Pacific Ocean

Take a taxi across the cliffs and highways that separate the city from the ocean, to reach the beautiful Rosa Nautica, rising out of the waves of the Pacific : here you can enjoy a Capitan, the Peruvian take on a Manhattan, to a beautiful soundtrack, surrounded by seventies-inspired decor.

Enjoy the treats that 'Astrid and Gaston' (the restaurant name) have on offer.

Then try novoandina, the new Andean cuisine, mastered by Gaston Acurio, THE chef in Lima .   Astrid and Gaston   has a stunning location in Casa Moreyra, the former residence of the San Isidro hacienda , a rural property once used by the court of the Viceroy of Peru and then by the Republic. Enjoy a set menu and a very contemporary atmosphere, which emphasises the diversity of the country - from Lima tacos to chalacos gyozas.

Top Six Things to do in Peru

Here are some of the highlights in South America's third largest country...   Machu[...] 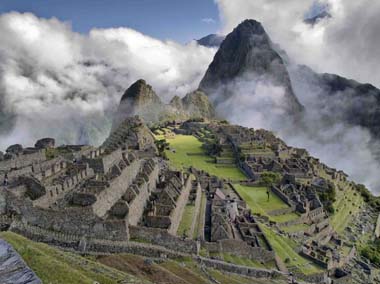