A Meander Through Macedonia 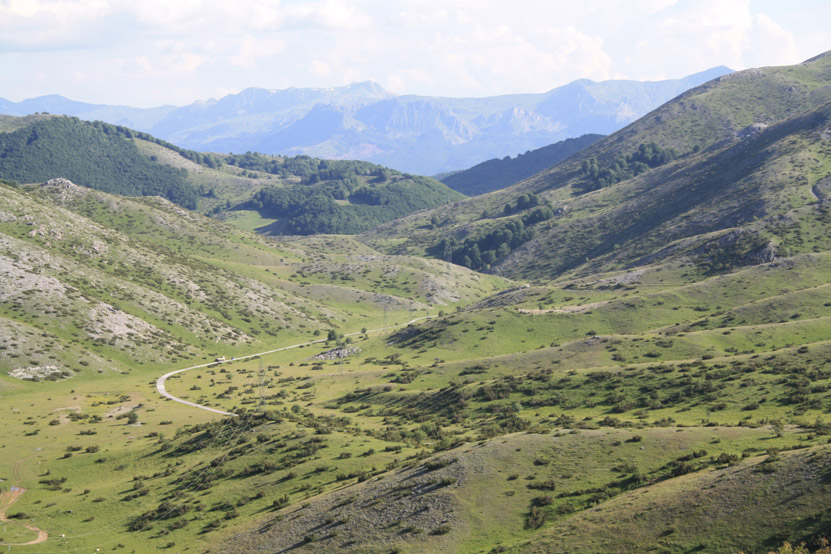 It's an understatement to say that Macedonian identity is a complex and ongoing issue; some of its neighbours even continue to question its right to use the name. Nevertheless, Macedonians remain positive about their future and the country has plenty to offer the interested traveller.

A meander through Macedonia

That said, no-one would travel to Macedonia simply for the purpose of seeing Skopje but it's worth an hour's wander as you pass through. Meander through the winding lanes of the old Turkish Market where mosques and traditional hammams rub shoulders with a plethora of gold and frock shops and cafes selling beer and kebabs. Head out of the market towards the Stone Bridge (Kamen Most) and you'll find old Skopje strikingly juxtaposed with the new, as spankingly fresh statues and imposing buildings, gaudily aping classical Roman architecture, line the Vardar River. The main square is graced with a vast statue of a man on a horse - don't say Alexander the Great! Such is the regional sensitivity toward the country's name and heritage, especially from neighbouring Greece, that Macedonians are still stepping around the issue.

Heading south out of the capital the landscape quickly becomes more mountainous as we pass through steep gorges flanking the Vardar. Half an hour or so beyond this we reach the more gently rolling landscape of the Tikves wine region then continue southwest towards Prilep where grapes are overtaken by tobacco as the main crop; lines of drying tobacco leaves are strung out by the roadside. After about two hours we reach Bitola, a jolly place with the feel of a holiday town, it's main street (Shirok Sokak - Wide St) lined with packed cafes and bars. This is where Macedonia's beautiful people come to relax and party and bars and clubs stay open well after midnight. It's easy to see the attraction when a beer costs MKD60 (85p). Main points of interest are the Clock Tower and the Stari Carsija, old Turkish market. Don't expect great food in Bitola, it's a grilled meat and pizza kind of town, but dinner for two cost us about Â£10 including beers. Just outside Bitola is the fascinating Roman site of Heraclea, a must-see while you're here, complete with beautifully preserved mosaics and a restored amphitheatre, built by Emperor Hadrian. Next day we drive west past the hills of Mariovo, through the Prespa Valley and its abundant orchards and finally to Lake Ohrid. In July and August this is Macedonia's prime holiday destination, though it still attracts very few visitors from beyond the Balkans. Thankfully in September the sun is a bit less intense and the crowds have dispersed so we can make a leisurely tour of Ohrid Town. First stop is the church of St Sofia, Ohrid's cathedral. Modelled on Istanbul's Haghia Sofia, it does not compete by any means in dramatic size or architectural beauty but it is home to an extremely fine collection of 11th century frescoes.

Next stop is possibly Macedonia's most-photographed site, the impossibly pretty Church of St Jovan, set on a promontory overlooking the lake. Again, it's worth a look inside for the frescoes and iconostasis. We then hauled ourselves up the hillside, getting rather hot by this time, to Samuil's Fortress. There's not much inside but the views from the ramparts are worth the hike, taking in the whole of vast Lake Ohrid and the distant peaks of GaliÄica National Park on a fine day.

As the sun sets we take in the gorgeous view from our balcony, across the lake to Sveti Jovan. Dinner is a traditional affair and, although, like the rest of the Balkans, Macedonians are keen on their meat, there's also a feast for vegetarians and we dine on Pindjur (roasted peppers), Gavche Bavche (a sort of beany stew) and an egg dish rather like piperade, all washed down with a delicious red from Tikves. Our final stop in Macedonia is Sveti Naum, on the southern shore of Lake Ohrid. Yes, it's another church (or rather monastery) and, yes, it has more frescoes but, seriously, they're gob-smacking and totally worth the trip! Did you know.....? Although ethnically Albanian, Mother Theresa was born in Skopje.