The Northern Lights, or aurora borealis, can be seen in various polar regions, but the Norwegian far north is one of the best destinations in the world for observing these famous green rays. When it appears in the darkness of night, this emerald spectacle is a breath-taking natural phenomenon which never fails to enchant and delight those who see it. Often people become so wrapped up in the magic that they turn into ‘aurora hunters’ and get caught up in a never-ending quest to see the lights again and again. Read on for a roundup of the best places to see the Northern Lights in Norway…

What are the Northern Lights?

The Northern Lights are visible thanks to the meeting of solar wind particles and gases in the Earth's upper atmosphere. The solar particles are attracted to the poles, which act as powerful magnets, causing them to collide with the upper layer of the atmosphere and ignite, creating this magical phenomenon. They can usually be seen within a radius of around 1,550 miles of the North Pole - between 65° and 75° latitude - and beyond the Arctic Circle in Alaska, Canada, Iceland, northern Scandinavia and on the southern tip of Greenland.

With the science out of the way, the next question is, where are the best places to see the northern lights in Norway?

The Lofoten Islands is an archipelago known for its raw natural beauty and gentle way of life. Located north of the Arctic Circle in Norway’s Nordland region, the islands are the perfect spot for some Northern Lights watching and are far enough north that you can still see the lights even when there’s very low activity. The area is also famous for its fishing, and for more than a century fishermen have come here each year from all over the Norwegian coast in search Lofoten’s most renowned fish: the skrei - a long, white-fleshed cod that comes to spawn in the waters of the archipelago from January to April. The south of Moskenes Island is one of the best places to see the traditional Lofoten landscapes and fishing villages, with their wooden boats and red clapboard houses that perch on stilts over the water.

Tromsø, a quaint coastal city in northern Norway with colourful wooden houses, is the most populated hub this far north with a population of 60,000 inhabitants. Since the 19th century it has been the starting point for polar expeditions and is still considered the ‘Gateway to the Arctic’, which makes it one of the most fascinating cities in Norway. Take a tour of the town to learn about its rich history and visit the university and polar research centres to find out more about the Arctic. The city is also prime Northern Lights spotting territory and Tromsø’s inhabitants are often lucky enough to observe the Northern Lights on their way to school or from the city's parks, if the light pollution is low enough. Once you’ve explored Tromsø, we’d recommend venturing a little further afield to discover more of the surrounding area, such as the fjord of Blasfjord.

The island of Magerøya, situated in the far north of Norway, are so remote they can only be reached through a tunnel under the sea. Here, the polar night lasts three months, so in winter even the birds desert the region. From the nearest town, Honningsvag, drive 12 miles through the snow following a snow plough to the North Cape, which is the northernmost point in Europe that can be accessed by car. From this plateau overlooking the sea, you should have a good chance of spotting the Northern Lights on a clear night, with nothing else to block your view but the water.

Spitzbergen is almost as far north as you can go; it is far beyond the Arctic Circle, beyond even the North Cape, and is the largest island of the Svalbard archipelago. The islands here are home to a plethora of wildlife species including polar bears (over 5,000 according to estimates), polar foxes, Spitsbergen reindeer, puffins, geese, and ducks. Head to the region’s tiny capital, Longyearbyen (the world’s most northerly village) for front row seats to the Northern Lights spectacle and the chance to observe another natural phenomenon: the polar night. Lasting from mid-October to mid-February, the event sees the sun go into hibernation and the night-time reign supreme for days on end.

For a slightly different take on this bucket-list experience, observe the Northern Lights from the sea off the Norwegian coast. Since 1893, the Coastal Express ferry fleet - a true national monument - has been serving 34 coastal towns every day, all year round, from Bergen in the southwest of the country to Kirkenes on the Russian border. With a fleet of 11 ships, it carries post, goods and passengers through a maze of islands and narrow fjords along the jagged coastline of Norway's far north. This maritime route was once the only link between the thousand-plus Norwegian ports and the rest of the world, created as a public service mission to open up the coastal towns, which has never ended despite the development of aeroplanes. The route takes six days to reach Kirkenes from Bergen, with 34 stopovers along the way, including the Lofoten Islands, Tromso and the North Cape. Standing on the deck in the cold salty air, you can witness the magic spectacle of the Northern Lights reflected on the sea, making this easily one of the best places to see the Northern Lights in Norway. 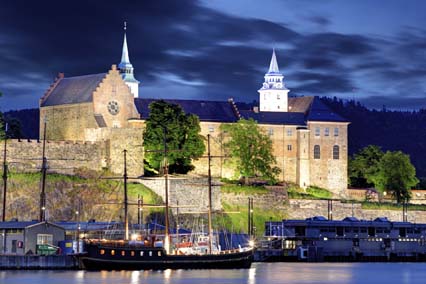 Overlooking the small town of Longyearbyen, the Spitsbergen Hotel[...]