Sloths are most well-known for being the slowest moving mammal in the world, so slow in fact that algae actually grows on their fur, which gives it a green tint and acts as camouflage. Sloths are also famously good sleepers, enjoying around 15 hours of shut eye every day. Lazy so-and-sos. 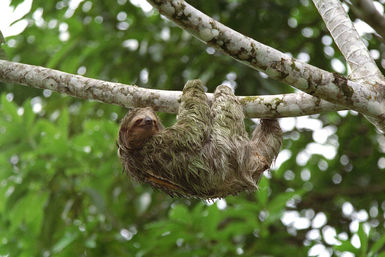 Sloths use their speed (or lack thereof) to their advantage: they move so slowly that predators can't see them. This is a very different tactic to that used by other jungle canopy dwellers, such as monkeys, who attempt to use speed to escape their predators. Sloths simply blend into their surroundings thanks to the algae that grows on their fur. Their most feared predator, though, is the harpy eagle, which still struggles to see the sloth even with its exceptional eyesight. Good thing really because we don't fancy the sloth's chances in a tete-a-tete. 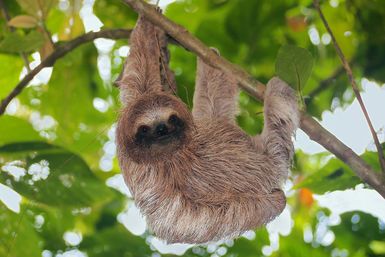 Sloths are tree-dwelling mammals and spend a lot of their time hanging upside down, as they have particularly strong arms. In fact, they grip so hard while hanging from the trees that they can sometimes remain there after they've died. Their hind legs in comparison are very weak, so they don't do well on the ground and only venture down to mate and around once a week to relieve themselves. Occasionally they also head to the canopy floor in search of additional food. Their strong arms mean they are excellent swimmers, and can hold their breath for up to 40 minutes. 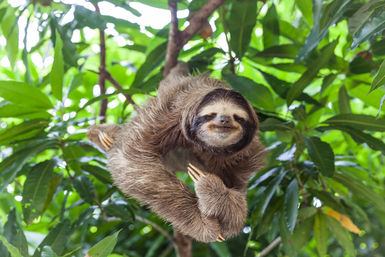 There are six different species of sloth, which are split into two groups - two-toed and three-toed sloths. Two-toed sloths are able to climb and position themselves vertically, but spend most of their time hanging horizontally. Three-toed sloths move in the same way, but tend to hang out in the forks of trees rather than hanging from branches. 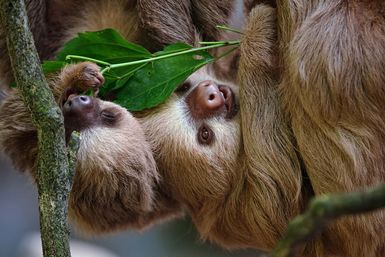 Unsurprisingly, sloths take their time over their meals. They tend to eat leaves, twigs and buds and, while they don't have incisors, manage to trim things down by smacking their lips together. 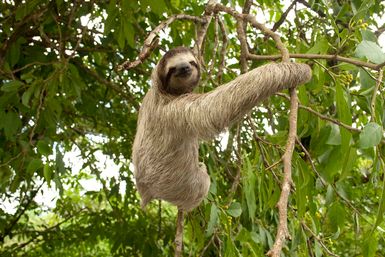 Sloths are fairly easy to see with a good guide, and the top places we would recommend for seeing them are the Peruvian and Ecuadorian Amazon and Costa Rica, in particular the Osa Peninsula.

"You’ll have a fairly high chance of seeing a sloth if you’re in the right place with a good guide, which is where we come in."
Alexandra Heriot Maitland, Americas Expert 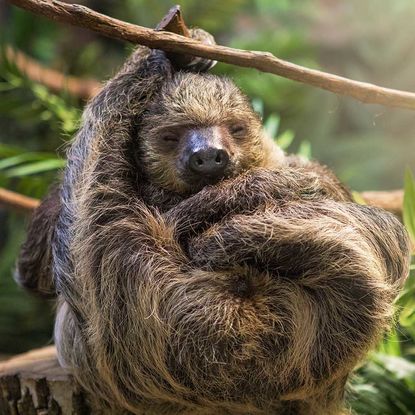 Top speed sloths can travel at

How long they can take to digest food

Average length they sleep for per day