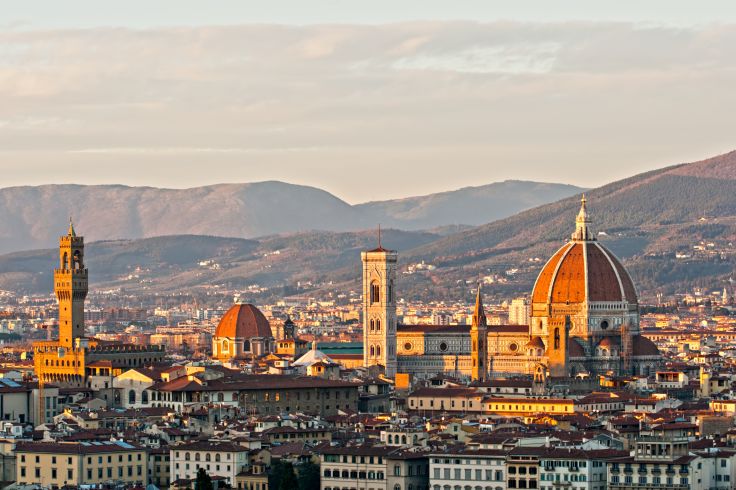 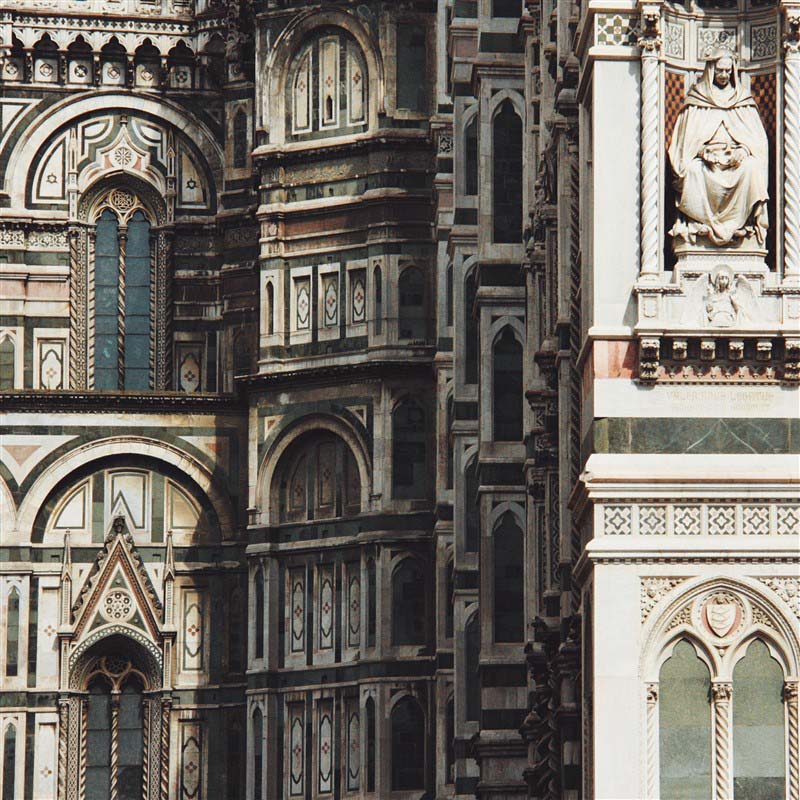 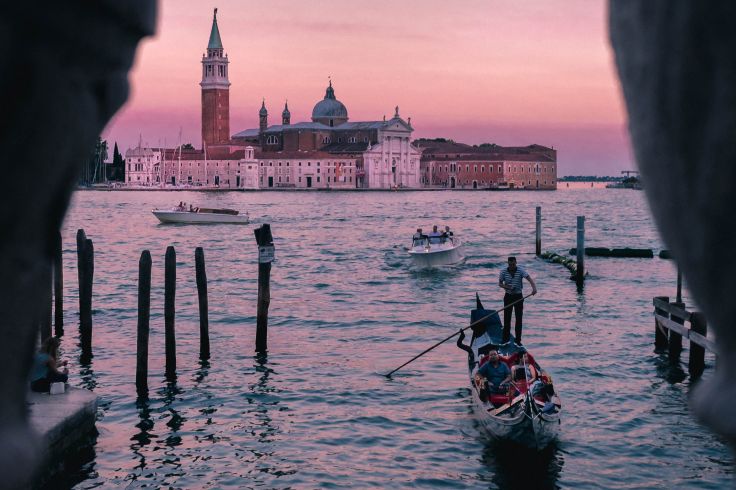 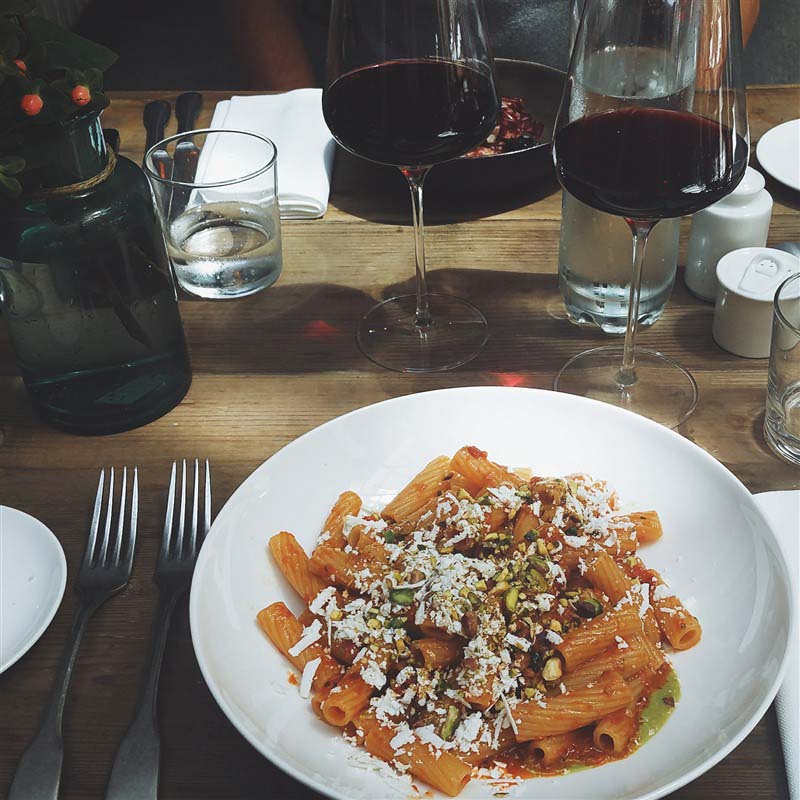 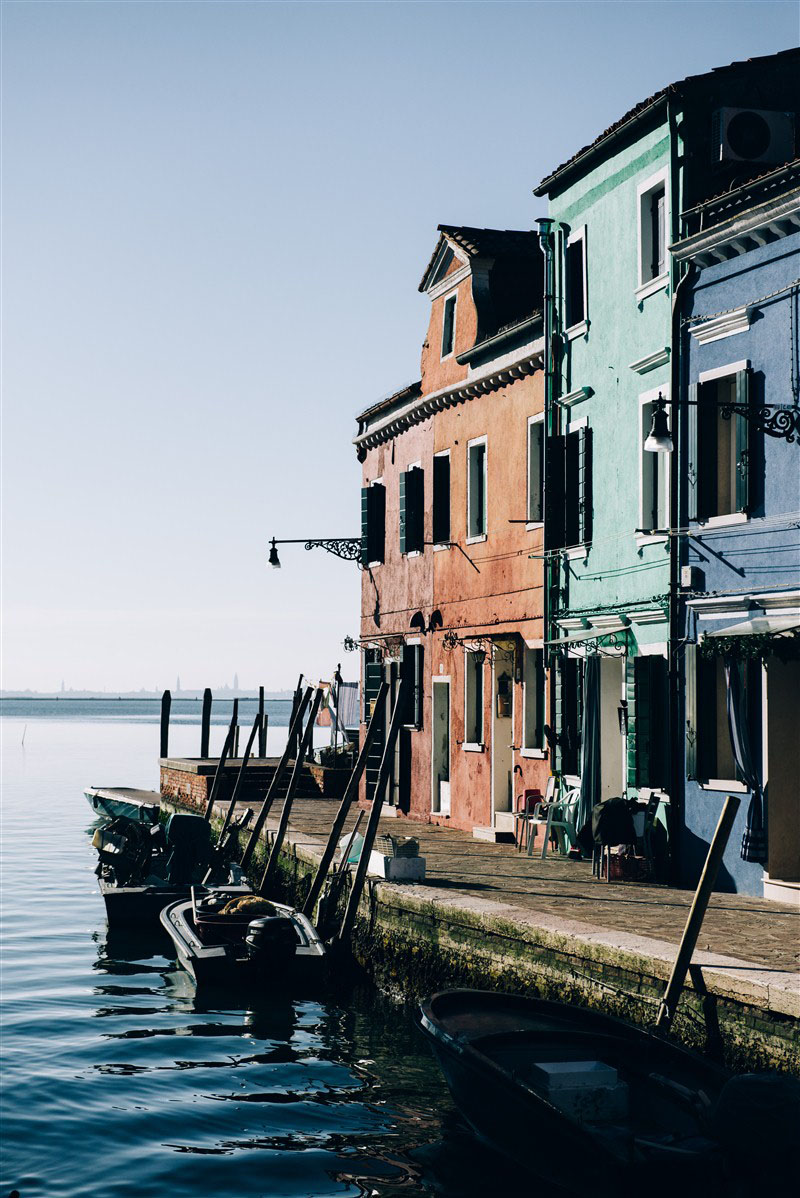 Share a thick bistecca alla fiorentina or a pasta dish for two just like in The Lady and the Tramp - take a carriage ride through old Florence - go for a gondola ride in Venice and take the vaporetto - relax in the gardens of Castello - admire the glass blowers of the island of Murano - and lose yourself in the architectural mastery.

Florence and Venice for two

–
These are popular cultural cities, but they still have surprises that are hidden away waiting to be found. Both romantic locations, lovers of art, beauty, history and culture will be in their element. We have planned two stops that give you time to find your feet and get your bearings, and, in the evening, relax in hotels that combine charm and an excellent location.
We have already planned some must-sees for the itinerary. Take a tour of Florence with a private guide who will explain the city's history and key figures such as the Medici, Dante, and Michelangelo. Stop for a gastronomical visit of the San Lorenzo market and taste the best Tuscan products, advised by your personal guide. In the same spirit of encounters and exchanges, follow the steps of a local guide in Venice for a laid-back stroll, either to major attractions or minor tangents. At sunset, meet with a professional photographer who will introduce you to the art of photography. Travel by train from Florence to Venice to enjoy a slower pace.

Private transfer and a four-night stay in a beautiful 15th-century house on the Piazza della Signoria. Here you are immersed in the heart of the Florentine Republic: the Palazzo Vecchio, the Loggia dei Lanzi, the Uffizi, everything is there. The Piazza del Duomo, with the Cathedral of Santa Maria del Fiore and the Baptistery of Saint John, are all just minutes away.

Included in the itinerary - Renaissance Florence . Florence is often associated with the Renaissance movement, and rightly so, which you will discover this with your private guide as you take an in-depth look at the Piazzi della Signoria and del Duomo, but also Ponte Vecchio and other lesser-known sites. Your guide will tell you the history and stories around these monuments, from Fra Angelico decorating the convent of Saint Mark (1438), Savonarole's condemnation and execution (1498), and Machiavelli teaching Laurent II of Medici (1513).

Included in the itinerary – A guided gastronomical tour of the San Lorenzo Covered Market which is a foodie paradise. It offers an extraordinary selection of regional specialities, allowing visitors to sample the best of Florentine cuisine: cheeses, meats, olive oil, schiacciata, cantucci... not forgetting the famous red wine produced just outside of Florence: Chianti Classico. The tour ends with the tasting of four types of meats, four types of cheeses, foccacia and truffle-based products (oil, cream, honey, butter). Then choose between a pasta dish or a tasting of three different wines.

The red roofs and dome of Santa Maria del Fiore in Florence rise up between the banks of the Arno and Tuscan mountains. The city's splendour owes much to the reign of the Medici family, especially evident in its Renaissance palaces and churches, as well as the royal villas scattered across the nearby countryside, including Villa Medicea di Careggi, Villa di Castello and Villa di Pratolino-Demidoff. Food lovers shouldn't miss out on a 'bistecca alla fiorentina' (Florentine steak) or pasta with white truffle. The Uffizi Gallery is one of the most stunning in the world but it's also worth visiting Pitti Palace, the Galleria dell'Academia, the Specola and its fantastic collection of wax anatomical models, and the History of Science Museum, which has a section dedicated to Galileo.
Option - Guided tour of the neighbourhood of Fra Angelico , the illustrious Italian monk and painter of the Early Renaissance, to explore the Convent of San Marco and the Hospital of Innocents, with its most famous paintings.

Train ride to Venice. Private transfer and three-night stay in San Zaccaria. In a quiet little area set back from the crowds lies a beautiful 16th-century mansion, which has been converted into a beautiful hotel. You'll enjoy the warm welcome, peaceful atmosphere and charm. St. Mark's Square, which is just a short walk away, lies just over the Ponte Storto.
Things to see and do - First, you'll have to learn how the water bus system works, Start at the very beginning, by heading to the Grand Canal, which is only a few steps from the hotel; St. Mark's Square; the basilica and its mosaics; the Doge's (Duke's) Palace; then have a coffee and a zaletti at Florian; visit the Gallerie dell 'Accademia (with works by Carpaccio, Piero della Francesca, Bellini, etc.); and the Bridge of Sighs. Then, perhaps, take a walk around the fish market of Rialto (selling eels, latterini, slipper lobsters, anchovies, etc.), the Pinault collection of contemporary art, and finally a gondola ride at Punta della Dogana. In the bacari, taste sardines prepared with onions, raisins, and pine nuts, spaghetti 'al nero di seppia' (in cuttlefish ink), polenta and cod brandade. Walk along the canals, rest in the little squares, venture into the courtyards, get a little lost. the best way to get around Venice which, despite appearances, is a quiet city.

Included in the itinerary - An introduction in Venice . Having a guide is the best way to unlock the secrets of the many sites, monuments and buildings. Even more so because Venice, although one of the most visited cities in the world, has not lost its secretive and modest charm. Afterwards, the sestieri, canals, palaces, churches, museums, squares are all yours! It's not just the streets that you'll explore, but the lagoon and its islands too.

Included the itinerary - Venice with a photographer . Your photographer guide will combine some iconic sites with some of the more off-the-beaten-path, secret sites, streets and piazzas that make for fantastic photos.

San Marco Convent and Fra Angelico, with a private guide


Make a visit to the district of Fra Angelico (the famous Renaissance monk and painter) to discover the convent of San Marco and the Ospedale degli Innocenti with its most famous paintings. Built in the 15th century by Michelozzo for Dominican monks by order of Cosimo de' Medici, the convent houses the works of Fra Angelico (including an Annunciation overlooking the staircase), who decorated each cell with a fresco. No matter how many beautiful places you've seen, this will still impress. Don't miss Domenico Ghirlandaio's Last Supper in the small dining room and the beautiful library.
Take a walk off the beaten tracks between cloisters and into a dining hall to discover the secrets of the Renaissance.
Option


Very close to the Lido, this small island (a former leper colony) was given in the 18th century to the Armenians, who, driven away by the Turks, established a convent there. The island was an important centre for the dissemination of Armenian culture. The convent houses a museum, a picture gallery, a unique printing press from the 18th century and a rich library of more than 150,000 volumes, including a valuable collection of illuminated manuscripts. It also offers the visitor beautiful grounds to explore with its huge garden. The nuns are delighted to welcome visitors at the dock to show them around the church, the refectory and the Archives room where 4,000 manuscripts are kept.
Option

Dependent on season, accommodation and activities
The estimated cost for this trip is £2,700 to £3,300 per person. This trip is tailor-made to your exact specifications so prices will fluctuate. The cost varies according to several factors, including the level of service, duration of the trip and how far in advance you book. The final cost will vary depending on several factors, including the level of service, length of trip and advance booking time. The exact price will be provided on your personalised quote. The average cost for this trip is £2900 per person.
A few of the benefits of travelling with us