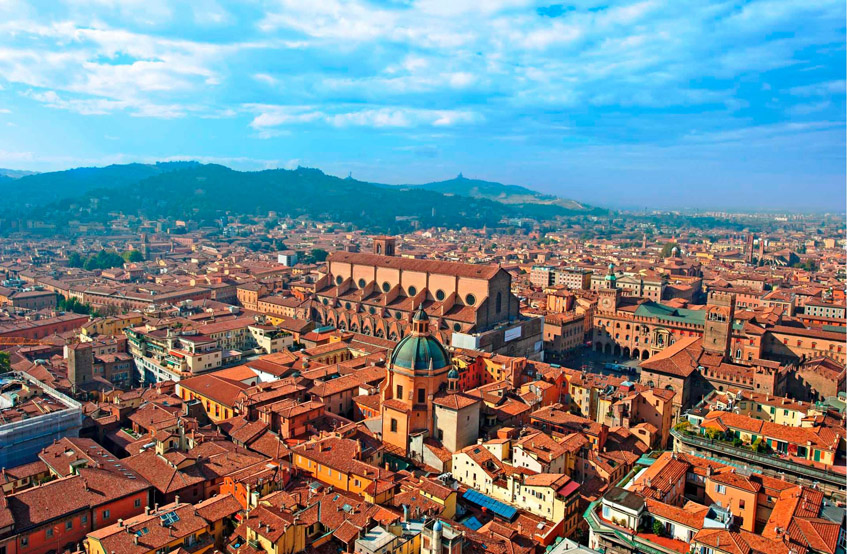 Take it from a (rather biased) former local, there's truly nowhere better to live la dolce vita than Emilia-Romagna's capital city of Bologna...

In a city as obsessed with food as Bologna even breakfast - arguably often the dullest, if most important, meal of the day - has been elevated to an art form. The Bolognese eschew Cornflakes and All Bran eaten in a hurry over emails, and instead take a leisurely breakfast in a café. To truly live like a local, buy a paper from the stand on the corner of Piazza Maggiore and plonk yourself down at one of the outdoor tables at Caffe del Mercato for a cappuccino (strictly pre-11am only) and a cornetto con Nutella or con crema - delicious Nutella or custard stuffed croissants.

It's probably innaccurate to call an espresso elevensies, but the thimbles of tar-thick, bitter coffee accompanied by a shot glass of water are a mainstay of the Bolognese diet. And besides, it's crucial to keep your energy levels up for all of the sightseeing you're doing.

No, not lectures and tutorials, but the fascinating museums run by the Western world's oldest univerisity. Two of the best are the Museo Palazzo Poggi - home to a truly rather gruesome, yet undeniably fascinating collection of medical and anatomical displays from years gone by - and the Archiginasio, just off Piazza Maggiore - where students of the university sweat over text books under centuries old frescos, and the perfectly preserved Anatomical Theatre gives a grizzly insight into medical student life way back when.

Taken rather less seriously than dinner, and yet no less delicious, lunch in Bologna usually consists of a mortadella sandwich and a glass of wine, accompained by the obligatory espresso. There are countless tiny delis and cafes along Via Pescherie Vecchie which do an excellent lunch, but my favourite sandwich comes from Zerocinquantanello, just off Piazza Maggiore.

Almost with out exception, everyone in Bologna rides a bike or walks everywhere. Wandering back streets in search of your next espresso aside, the best way to work up an appetite for dinner is to climb two different sets of steps. Start at the Torre degli Asinelli, a medieval skyscraper of sorts, before hot footing it up the portico covered steps to the Santuario di San Luca, which overlooks the city, wiping out any bad luck you inadvertenly acquired climbing the tower.

When dinner doesn't happen until 8:30pm at the earliest, it comes as no surprise that aperitivo, technically a Milanese invention, is wildly popular among young and old in Bologna. Almost everywhere, from dingy bars populated with cigarette-toting students to sleek and chic establishments, puts on a spread. Casa Minghetti is far and away the chicest, serving Old Fashioneds and Champagne alongside delicate nibbles, just enough to tide you over until dinner.

Tucked down a side street the unassuming da Nello takes diners into its cellars and serves up some of the best Italian food in the world. The family run restaurant specialises in rich, Emilia-Romagnan cuisine, favourites include tagliatelle al ragu and pork thigh. The wine list is chock full of impeccable local varieties, including Lambrusco - a sparkling red.

A day in Italy is not complete with out at least one gelato. The best in town comes from Cremaria Funivia, on the other side of Piazza Maggiore, so amble over slowly to ensure maximum room for at least two scoops of sheer perfection.