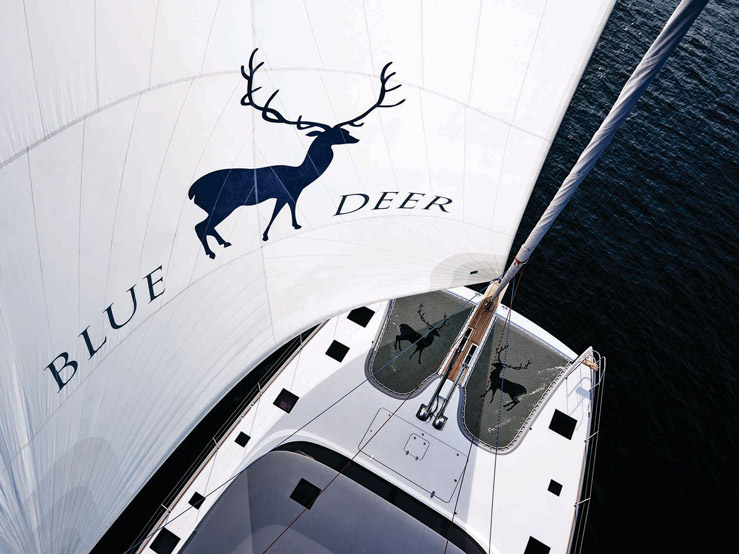 After dropping deeply unsubtle hints to Stefano, the owner of the Blue Deer, I flew to Italy ready to board the sublime catamaran for a few days in the Pontine Islands. We explored Ponza town itself, before heading over to the nearby island of Palmarola and doing some sea urchin diving...

It's morning and I've had one of the best night's sleep I can remember. I'm lured on deck by the smell of coffee. Puglian Paulo hands me a perfect espresso and a biscotti which I savour sitting on the end of Blue Deer's diving board (sourced - naturalamente - from the company that makes the diving boards for the Olympics) with my feet dangling over crystal clear sea. It's time for a dip. It's October but the water is 24 degrees and the outdoor temperature is a glorious 24 as well. I take a mask and snorkel and the visibility is astonishing - 50 metres or more.

Then we jump in the catamaran's tender to motor into the harbour of picture perfect Ponza Town with its pastel painted houses clinging to the cliffs. At this time of year the island lacks the buzz it generates when the Italian great and good arrive in Agusto, but there's still an innate charm and it's a chance to appreciate those twin joys of the real Italy again - authenticity and simplicity - where old men potter and three-wheeled Apes (pronounced a-pay) buzz around with their Piaggio scooter engines.

We meet a German hippy called Heidi who shows us down into an enormous and two-thousand-year-old Roman cistern that held precious rainwater channelled off the island's steep hillsides and then distributed by a series of channels. At the same time the ever-ingenious Romans dug a tunnel between the island's two perfect natural harbours so naval and merchant ships could find respite in a harbour whichever way the wind was blowing, and disembark goods and soldiers. Post Romans, the Berbers, arriving as conquerors centuries later, used the cistern as a conventional well, and modern day Ponza has its water delivered by boat from the mainland. Think about that for a second. We had another wander around the narrow alleyways of the town, and a delicious cappuccino, which was deemed just about acceptable by Stefano as it was one minute before midday - the strict cut off point after which only espresso is culturally acceptable.

On the way back to Blue Deer Alfredo the skipper took us to a bay where a giant sea stack we circled in the boat suddenly revealed itself to be a massive sea arch every bit as awesome as the far more famous fragolini in Capri. Known as la porta di inferno - the gateway to hell, it's an unlikely way to Hades in such a heavenly spot.

As we sailed out of Ponza we passed a lighthouse perched on a dramatic basalt promontory reached by a narrow foot path that wound up the hill like something from Game of Thrones. Sadly we didn't have time to, but you can walk from Ponza in a couple of hours.

Then to Palmarola, across the deeper water. It was one of those days when the water is so calm and the sky so cloudless that the horizontal split between sea and sky is almost indiscernible, as if you're sailing into a perfect azure void.

Another perfect bay in which to moor up, and after lunch (calamari and potato salad) Stefano introduced me one of the Blue Deer's best toys - a pair of Seabobs - miniaturised and motorised one man 'submarines'. It's brilliant Bond-style fun to put on a mask and snorkel and zip around, taking a deep breath and diving down a few metres to weave in among the boulders on the sea floor.

Next, we boarded the tender again for a tour of the extraordinary caves and stacks of the island before donning wetsuits, masks and snorkels again to indulge one of Stefano's great passions, diving for sea urchins. I held the mesh bag as he dived down to expertly flick the urchins off their rocky homes with a Bond-style knife and wearing special gloves to avoid being pricked by the scores of sharp spikes urchins use to deter predators.

Back on deck, Stefano sliced the tops off the urchins like boiled eggs, and I scooped the vivid orange roes out into a bowl. It was an almost hypnotic process as we worked at the back of the boat while the skipper set our course back to the mainland and reality. As we worked I sat nursing a delicious Sardinian beer (specially sourced, of course) on the prow of the boat. A vivid red sun set was turning the white cliffs of Palmarola blood red, before a full moon rose over the islands. It was genuinely one of the most magical moments I've had in travel - a moment of perfect Italian choreographia.

That night we moored up in Gaeta again and enjoyed the sublime end result of our labours, a delicate subtle and sensational urchin roe linguine.

The crew - made up of a Sicilian, a Puglian, and a Milanese - might sound like the start of some Roman bar joke, but it's a warm reminder that while they remain fiercely loyal to their respective regions, all Italians share certain passions - food, beauty, life. In short, the Italians have got the art of living down pat, and Stefano Barbini is the best proponent of this you could possibly hope to meet. 'Stefano,' I asked as we disembarked for the last time, 'What's the Italian equivalent of the phrase joie de vivre?' He thought for a second or two before replying: 'We don't really have one or need one - we just live it.' Amen to that.