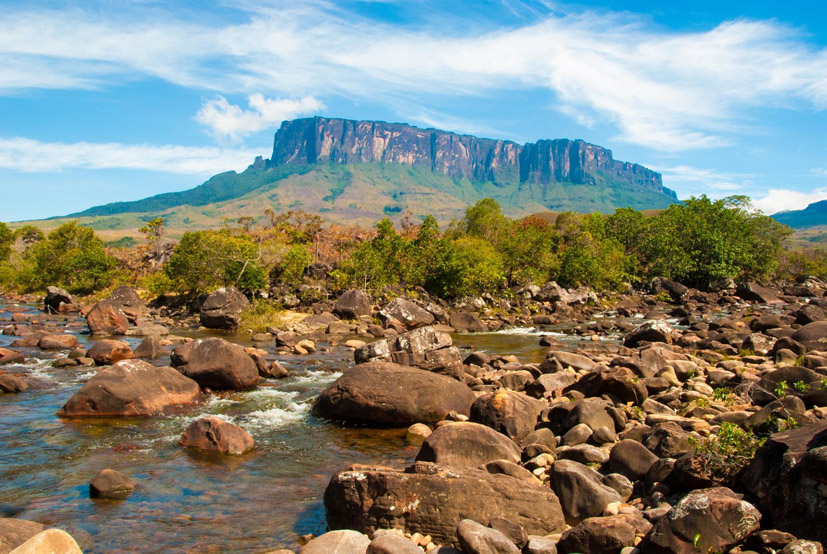 Guest blogger Robbie shares the second half of his once in a lifetime trip...

The ironically named 'hotels' on the summit of Roraima are the large sandy caves in which we pitched our tents and rested from the rain. Having seen little of the summit on arrival due to the weather, my impression was of a quiet and ancient landscape. The rock formations are unimaginable and often resemble figures or animals.

Saturated and covered in sand, I crawled into my tent and waited for morning. I thought I was going to tear my skin off I was itching so much so I enforced a no itching policy and found that my leg started involuntarily shaking quite like a horse does when it quivers to get rid of flies. The local Penom villagers were our guides on the summit and had incredible knowledge of the natural world. We had a fantastic cook called Tensing. Despite the fact he has little material possessions, he lives with a wife he loves in a tiny wooden house he built in a remote hillside community of friends (we were invited there for supper after the expedition) and he is the nearest to being content that I have ever seen a man.

Because of the daily rain, all nutrients are washed away so plants on the summit have evolved to be carnivorous to survive. We were partly there to film a new species of pitcher plant, footage for which was aired on BBC 2 in December 2010 in 'A Decade of Discovery'. Our daily routine would involve filming all the wildlife we could find which, amongst others, involved tarantulas, lizards and a weasel which was potentially a new species. My favourite was seeing an orange breasted falcon, one of the rarest falcons on the planet, sitting in a bonsai tree on the cliff edge as it waited for pigmy parrots to hunt.

The powerful forces of nature

Before we set off on part two of the trip, the cameramen (Adrian had recovered enough to join us), Tensing and I spent a day in the rainforest filming a few shots for the opening scenes of the documentary. What truly amazed me was the sheer abundance and variety of life. The highlight of the day was watching a family of toucans flying above the canopy whilst hearing the shrill cry of howler monkeys in the distance. Early the next day, we jumped into a little helicopter and were flown onto the remote mountain of Kukenan (illegally!). It was another world up there. From the frenzied competition of the rainforest, the silence of Kukenan was deeply peaceful whilst the bizarre labyrinths of rock, imposing vertical cliffs and gut wrenching views gave a real sense of the powerful forces of nature. We put up tents on the bare rock tying our guy ropes to the rock as there was no soil. Picking up one stone revealed the first sign of animal life - a black scorpion. Then a friendly humming bird came to inspect us as we set up the tarpaulin that was to be our kitchen. It hovered inches of my face without any fear at all.

The first evening there, the weather cleared and we went to film the setting sun over the rainforest from the the north of the mountain where giant ridges stagger the edge. We were hearing a story of Adrian's adventures with David Attenborough when Tensing came climbing over rocks with cheese toasties and some little speakers playing drum and base. As the parrots flew overhead, back to their nests for night, I found myself unable to contain laughter in pure happiness.

Only the trickling of water broke the silence while all around huge tropical storm clouds would grow out of the rainforest, making excellent time-lapse shots.

Before leaving, we had many adrenalin fuelled helicopter trips which were slightly terrifying as even the pilot was worried we weren't going to clear the ground as we skimmed over rocks in our heavily laden little machine. The documentary comes out at the end of June so I can't wait to see that. Adrian is unfortunately very ill which is extremely sad as I built up the utmost respect for him. The Tepuis are awesomely beautiful and they have given me a sense of reassurance that such places where humans have left no trace of their existence, still survive on our planet. We wait to see if the documentary is a success and the area receives the protection it deserves.

Friend of Original Travel Robbie Miles recently won the trip of a life time on an[...]