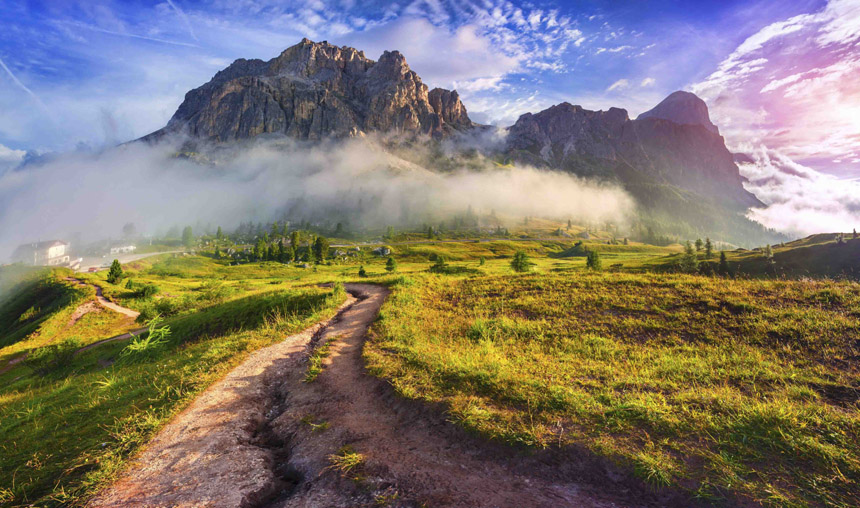 I don't like skiing. This is partly because I ski with all the elegance and grace of a drunk giraffe but largely because I think that climbing up a mountain is vastly superior to slipping down it. I have yet to find a feeling that matches the sense of achievement and (once I've got my breath back from hauling up there) relaxation that I get from sitting on top of a conquered peak. Horribly clichéd though it may sound, you really do feel far away from the irritations and stresses of everyday life when you're looking out across mountains which have stood for millennia. Whilst I don't love skiing, I do love mountains and a visit to the Dolomites provided some of the most beautiful I've ever seen.

Just south of the border with Austria, 'the Pale Mountains' are hugely striking as dolomite rock crags loom over soft green pastures. Take the Matterhorn, stretch it out so it's as wide as it is tall and you've basically got the Dolomites; they're impressive to say the very least. This incredible scenery was the battleground for the fierce conflict between the Italians and the Austro-Hungarian Empire during the First World War, however has also given rise to one of the most exciting ways to explore its peaks; the Via Ferrata. The iron cables, pegs and ladders of the via ferrata were originally intended to help ferry soldiers and equipment to the front line but today are used to render some of the most beautiful peaks accessible to those without much climbing skill or experience. Yes, you will need to have a steady head for heights (or at least an unshakeable resolve not to look down!) but when you're clipped on and scaling a daunting looking rock face, you'll wonder why you ever bothered bragging about ski runs. Nobody really cares about that mogul field you tore through in Verbier but tell them about how you hung out on an iron ladder over a 50 foot drop and they're going to be impressed.

If just reading the words 'via ferrata' makes your legs start to wobble and your stomach churn then you needn't worry, though, as there are gently sloping pastures, lakes and mountain passes to explore at a gentle hike (or even bike). Beaches may seem like the only option in Europe in summer, but I defy anyone to return from a trip to the mountains feeling anything but a relaxed, refreshed version of their former self; which, after all, is surely the goal of any holiday?

That sense of repose is helped in large part by the utterly enchanting and indulgent places in which you can stay; from chocolate box hotels to pristine private chalets, the Dolomites has something for everyone. After a day of hiking or biking and, if we're honest with ourselves, a massive plate of ravioli and several glasses of wine, you'll want to sink into a marshmallow bed before waking up and enjoying a lavish breakfast you're somehow still hungry for. Step forward Rosa Alpina, Ciasa Salares and the immaculate San Lorenzo Mountain Lodge; all offers something different but they are united by their incredible surroundings, outrageously good food and impeccable service. Yes, I had the particularly onerous task of visiting all three... it was a tough few days.

If you aren't totally sold on the Dolomites already (how dare you) then I suppose I could also let you in on the fact that in winter you can enjoy some of the most varied, exciting and uncrowded pistes in Europe. The Dolomites are so good that possibly even this skiing sceptic could be convinced...