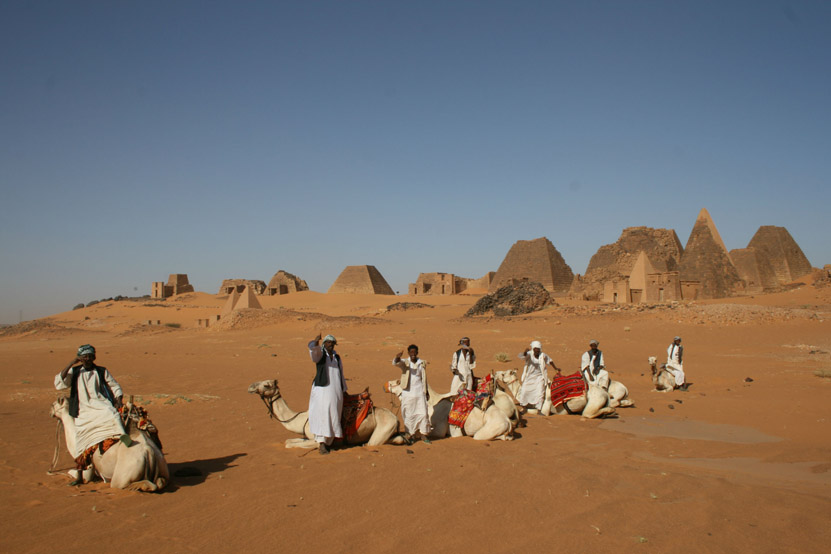 Northern Sudan is probably not at the top of everyone's wish list of places to visit but, looking back on a whirlwind week there, I can highly recommend that it should be. In this blog I describe part one of my tour around the golden country that's brimming with culture.

Up until 2011 Sudan was the largest country in Africa, with its Northern half being made up of mostly desert. To the West are the great rolling sand dunes of the Libyan Desert and to the East is the Nubian Desert with relief in the form of the Nile - the White and the Blue Nile which converge in Khartoum and head on up to Egypt and eventually the sea. Look beyond the politics and you will find a lengthy history and one which has left a legacy of extraordinary archaeological sites. If you love the desert, empty spaces, remote unexplored and untouched ruins, adventure, history and being one of the first then you can't really go wrong...

Sudanese people are captivating; strong, tall, and beautiful, they love to smile and are perhaps some of the kindest and most good natured I have come across. There is an astonishing number of different tribes - approximately 500 and speaking over 100 different languages in both North and South Sudan. Everyone who asked where I came from beamed when they found out I was English - 'Aah we love your King Victoria' they said. The little museum in Khartoum known as the Khalifa's house displays old photographs, rifles and maps - fascinating reminders of noble conquests and bloody rebellions with names like Kitchener, Gordon of Khartoum, and the Battle of Omdurman as immortalised in the 1969 Charlton Heston/Lawrence Oliver 'Khartoum'. And in the courtyard of this little museum is the oldest car in Sudan.

The city of Khartoum is laid out on the map of the Union Jack and has choking traffic clogging the streets throughout the day. However, there is an underlying lazy rhythm to the city which is endering (unless you are in a rush). Huge scented frangipani trees line the streets, white ibis fly in and out of the tree tops and all manner of roadside stalls, shops and cafes ply their trade. We stayed in the very comfortable Corinthia hotel, funded with Gadaffi money, where many of the rooms and areas are named after cities in Libya. My room had a stunning view looking out over the Nile and to Tuti Island where donkey and cart ploughed fields were in abundance and the pace of life looked somewhat less frenetic than the streets directly below me.

A day for the capital would probably suffice and you want to be there on a Friday to enjoy the Sufi's hypnotic dancing at sunset. There is also the vast market of Omdurman and a few good restaurants; we went to an excellent restaurant busy with people from China to the Far East enjoying the warm night air smoking shisha pipes, eating mezze and drinking lemon and mint juice. It was time to leave the hubbub of the city though and head north to the empyt desert.

Leaving Khartoum we sped North West on a good road- four jeeps piled high with kit and caboodle. Our guide was Carla - a feisty Italian woman with an unswerving passion and loyalty for the country and its people. Our cook and drivers clearly adored her and her knowledge of the sites was second to none - she enlightened us first in English - then Spanish and Italian for the small multinational group that we were. We drove through a lot of desert, in fact we drove a lot and must have covered at least 2000kms in the week I was there. It wasn't spectacular desert akin to Libya or Algeria however we only touched on the outskirts of the Great Libyan Sand Sea and there were pretty patches as we raced through stopping occasionally to visit small villages eking out an existence in such a harsh environment.

The Bedouin live in small huts bound together with rope and rags with the goat and sheep living in a separate hut not far from the family. Coming across a well was a highlight - and the focal point for these people who walk for miles with containers of all sorts bringing babies, children and donkeys with them to spend the best part of the day taking their fill and gossiping. At our sudden appearance many of the children were quite scared and started to cry. I felt like an ugly intruder for we must have appeared terrifying to children who had not clapped eyes on camera laden white tourists yet. In fact Carla quite rightly forbade us to take photographs at some wells and markets for Sudan is fragile and on the cusp of tourism and we must have a responsibility as some of the first people there to treat it with respect. Turning up, taking photos and departing in a cloud of jeep dust will undoubtedly start up the inevitable 'money for photos' hassle that has now become the familiar refrain in countries like Ethiopia.

The markets are wonderful - colourful, vibrant and African in scope and innovation. I could have spent hours wandering through the stalls stopping to talk and watch people; the handsome boys in thin muslin jelabiyas smoking, laughing and drinking tea and the women in rich red shawls laughing and gesticulating to come and chat. At one stall a small Toyota motor had been rigged up to power a blender which pumped out chickpeas for hummus, guided by an enthusiastic boy who used the truck's gear sticks for different power settings. A donkey and cart wound its way through the stalls carrying huge blocks of ice which were chipped off to customers using a bicycle spoke fastened to a stick. The shoe maker artfully stitched up crocodile skin shoes and the women wrapped up sticky small bags of peanut butter with hennaed hands (delicious pared with the hot bread). This little community was mesmorising and I didn't want to leave. But it was time to head on, stay tuned for Part II of this blog... 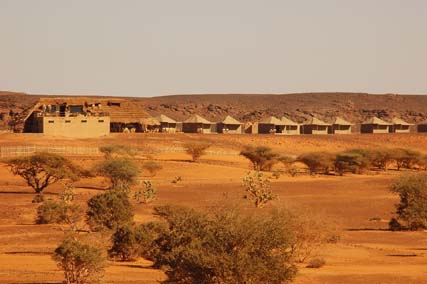 Nubian Rest House is a boutique hotel located in Karima at the[...]