Modern Standard Arabic, which is a Semitic language.

The dialectal forms of Arabic used in Jordan are: South Levantine Arabic, Modern Standard Arabic and Najdi Arabic. Chechen, Circassian, Armenian, Tagalog and Russia are also spoken by their relative communities. English is the most common foreign language.

The vast majority of the population of Jordan is Arab. Palestinians account for over 50% of people; Bedouins, around 5%. The largest minority is Circassian (Adyghe) at 1.2%. The country also has many other minorities, including Druze, Armenian, Chechen. Religion Sunni Islam is the state religion and 90% of Jordanians are followers. Added to this, 8% are Christian (Orthodox, Coptic, Greek Catholic, Armenian). The Druze practice a heterodox Islam, Ismaili of origin.

Muslim religious holidays are celebrated. Depending on the lunar calendar, dates vary every year and include:

Christian Religious Holidays are also observed, including: Christmas (December 24 and 25, including the Orthodox); Palm Sunday and Easter (celebrated by all faiths the same dates as the Eastern churches).

At the crossroads of the Middle East, Jordan’s location connecting Asia, Africa and Europe has shaped its history and many great empires have risen and fallen on it lands, with the first settlements tracing back to ancient times. In 1580 BC, the pharaoh Ahmose created the province of Canaan between Jordan and the Mediterranean. Three centuries later, the Israelites arrived in Canaan, which marked the beginning of the end for the settlements there. Transjordan began to differentiate. The Hebrew kings took control of Jordan and divided it into a number of kingdoms, the most important of which were Edom, Moab and Amon. A kingdom called the Nabataean came next – Nabataean traders took the place of Hebrew’s in Transjordan and before long controlled the area up to the Red Sea. In the first century BC, the Nabataean Kingdom built Petra as their capital, which soon became a centre of trade. During their reign, they resisted Greek and Judean forces. In 63 BC, Rome set foot in Judea and pushed east into Jordan, which eventually became part of the Roman Empire. The Nabatean kings enjoyed relative autonomy under Roman rule but there were downsides to their independence, with bitter wars against Herod the Great and Cleopatra. During the first century AD, the trade that flowed freely and prosperously through Petra partially escaped in favour of Egypt. The decline of the Nabataean kingdom began, and it became Arabia Petrea. Christianity grew in popularity during the fourth century. Petra continued to play an important role in the region, while distant echoes of upheavals affecting the empire reverberated. The Byzantine Empire almost appeared without notice. In the seventh century, Arab conquerors overwhelmed a scattered peasant people and Jordan became part of the Islamic world. Centuries followed in which Jordan continued to be a crucial trade route between other nations. In the eleventh century, the Franks took Jerusalem and were present in the region to varying degrees for two hundred years.

In Jordan today, there are still many military remains from this period of the Crusades and the Latin kingdoms of the East. In 1291, the Franks were driven by the Mamluks, but by 1516, the Mamluks were floored by the Ottomans and the country became a province of the Ottoman Empire. The cities of Transjordan withered. The Bedouin tribes led a turbulent existence in the desert and some of them rallied against Bonaparte Ottoman forces during the 1799 campaign in Palestine. During the nineteenth century, European pressure increased in the Levant. The British settled in Egypt in 1882. When the First World War began in 1914, the Ottoman Empire joined the German side. At that time, Arab nationalism was gaining momentum, supported by the British. On 10 June 1916, the Great Arab Revolt against the Ottoman Empire began and by the end of the year, Hussein was proclaimed King of Hejaz and recognized by Britain, France and Russia. In 1917, the Battle of Aqaba was fought and the Arabs were victorious over Ottoman defenders. The English and Arabs entered Jerusalem and the following year they entered Damascus. In 1919 Hussein’s son, Faisal, demanded independence at the Paris Peace Conference, but was met with rejection from colonial powers. The League of Nations approved British mandates over Transjordan, Palestine and Iraq and France was given the mandates to Syria and Lebanon. The Syrian revolt was crushed. British power over Transjordan was soon withdrawn for services rendered against the Turks, and the state was formally recognised in 1923 as independent under the leadership of Emir Abdullah. British rule continued for some time until a series of treaties formalised the agreement in 1928. The role of Transjordan to the side of the allies during the World War accelerated the march toward independence and on May 25, 1946, full independence was granted to the Hashemite Kingdom of Jordan. At its head was King Abdullah, son of Sharif Hussein.

In 1948 the Jewish state of Israel was created in British-mandate Palestine. On the ground, Jews and Arabs clashed violently. In May 1948, the British withdrew. The Arab states then declared war on Israel. The Jewish state won on all fronts and increased its control area. King Abdullah annexed the West Bank, which, under the UN resolution, was to be part of a Palestinian state and East Jerusalem (January 1949). King Abdullah was assassinated in 1950. His son, Talal, succeeded him, but mental illness forced him to cede the throne to his son, Hussein. The massive influx of Palestinian refugees called into question the balance of the Kingdom of Jordan, but Hussein sought to consolidate the population. In 1967, during the Six Day War, Israel took control of Jerusalem and the West Bank and a major influx of refugees flooded into Jordan. Jordan was faced with the rise of the Palestine Liberation Organisation (PLO), which began to act like a state within a state, defying Jordanian soldiers. King Hussein’s motorcade was attacked in 1970 and Black September began – it involved violent confrontations between the PLO and the Jordanian army and lead to thousands of deaths. By the end of the conflict, the Jordanian army ended the military presence of the PLO in Jordan. In 1988, Jordan waived its claims to the West Bank and recognised the PLO as the sole representative of Palestinians with the right to set up a government in any liberated territory. By the end of the 80s Jordan’s demographic had changed and now Palestinians were no longer a minority, but a significant majority of Jordan’s population. Hussein was committed to integrating the Palestinian community into Jordan.

In October 1994, Jordan signed a peace agreement with Israel, which removed economic barriers between the two countries. King Hussein died in 1999 and his son succeeded him. The second Intifada in 2000 and the 2003 invasion of Iraq have kept Jordan under considerable pressure. But despite the conflicts that surround it, Jordan has developed rapidly over the last few decades, its economy has remained steady and many of its cities are modern, cosmopolitan, urban hubs.

Tipping is common practice in Jordan and it’s best to tip in Jordanian dinar. Around £5 a day for a good tour driver is a decent tip, while restaurants are usually left 10% of the bill. Porters, housekeeping staff and taxi drivers will also gratefully receive a tip of £1 or £2 for a job well done. Haggling is practically an institution in Jordan and the more expensive an item is, the longer the negotiation. The bargaining process is part game, part social norm and part necessity. Take time to compare prices and decide on the figure you’re willing to pay before entering into talks with sellers. Jordan is a country where people will often address you with a smile. Greet Jordanians in their language – ‘Salam wa aleïkoum’ for good morning or ‘Leïla saîda’ for good evening – and they will be delighted. If you have accepted an invitation to eat lunch or tea in a family home, be prepared to stay a while and decline the invitation if you’re in a hurry. Always remove shoes before entering a home.

In Wadi Rum, as in any desert environment, it’s important to stay hydrated, so bring plenty of bottled water. The ecosystem is a delicate one and visitors are advised not to pick up stones and plants and leave no trace of their visit. There are some more dangerous animals, including vipers and scorpions, that roam the region, but their hibernation period often coincides with high season and meetings are exceptionally rare. As a precaution, however, there are simple rules to follow: do not raise stones or pebbles, do not walk barefoot and camps should be situated away from vegetation and stones.

Jordanian crafts are varied and beautiful – stunning wood-carved objects, caftans in all shades of the rainbow, metal ornaments, leather accessories, colourful fabrics, woven blankets, gorgeous ceramics, pottery and earthenware – all make excellent mementos. Many crafts bought in smaller villages can make a big difference to the lives of the creative people behind them.

Much like its historic story, the cuisine of Jordan is interwoven with its location at the crossroads of the Middle East. Food here is an intermingled delight of regional flavours and elements borrowed from neighbouring countries. Mansaf, Jordan’s tasty national dish, is a traditionally Arab medley of lamb, fermented dried yoghurt, rice, almonds and spices. Maqluba is another classic and is a stew of meat, rice and fried vegetables, sometimes served in a pita. Lebanon is a heavy influence in cooking and favourites with a Lebanese touch are mutabal, a dip made with aubergine, hummus infused with all manner of flavours, tahini, mashed beans, yoghurt cucumber, tabbouleh and stuffed vine leaves.

Kebabs (shish taouk) are widely eaten and mutton, chicken or beef are the most popular. Often on the table are also breads filled with thin slices of mutton cooked on a spit. At Aqaba, the fish of the Red Sea are served grilled with onion and garlic. Meals generally end in Jordan with a tea or coffee. That’s not to say Jordanians don’t enjoy desserts though – most Arabic sweets are packed with enough sugar or syrup to keep those with even the sweetest tooth happy. Desserts include Ma'amoul, a tasty cake with nuts or dates and perfumed with rose water, a rich cake filled with crushed nuts called kona and mohallabiah, a delightful pudding of rice flour and milk, flavoured with flower of orange blossom.

We don’t recommend drinking Jordan’s tap water, but bottled water is in plentiful supply as well as various soft drinks and fresh fruit juice. Tea (often flavoured with sage among the Bedouins) is the country’s national drink and traditionally offered to visitors. Coffee is Turkish in origin and made with cardamom. Jordan has a lengthy history with wine and there are two wineries in the country. Palestinian wine is also often served. There are also several local beers on offer. 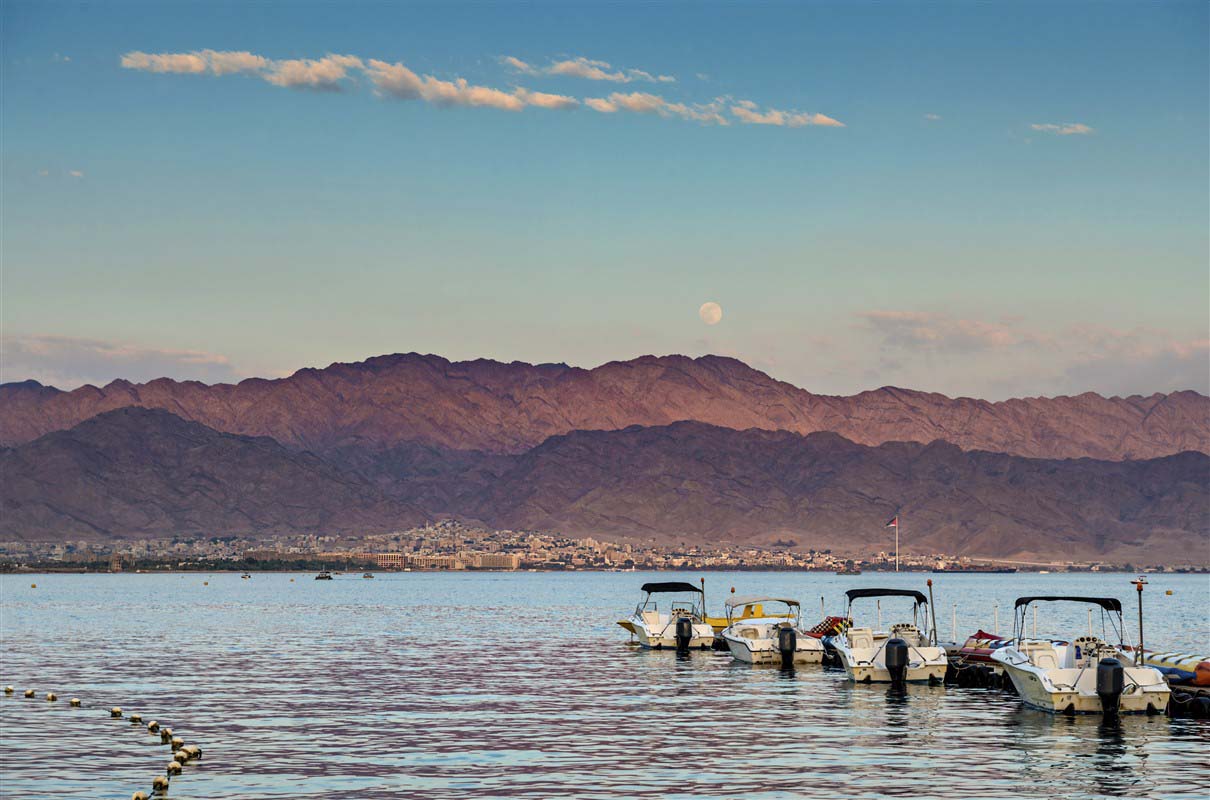 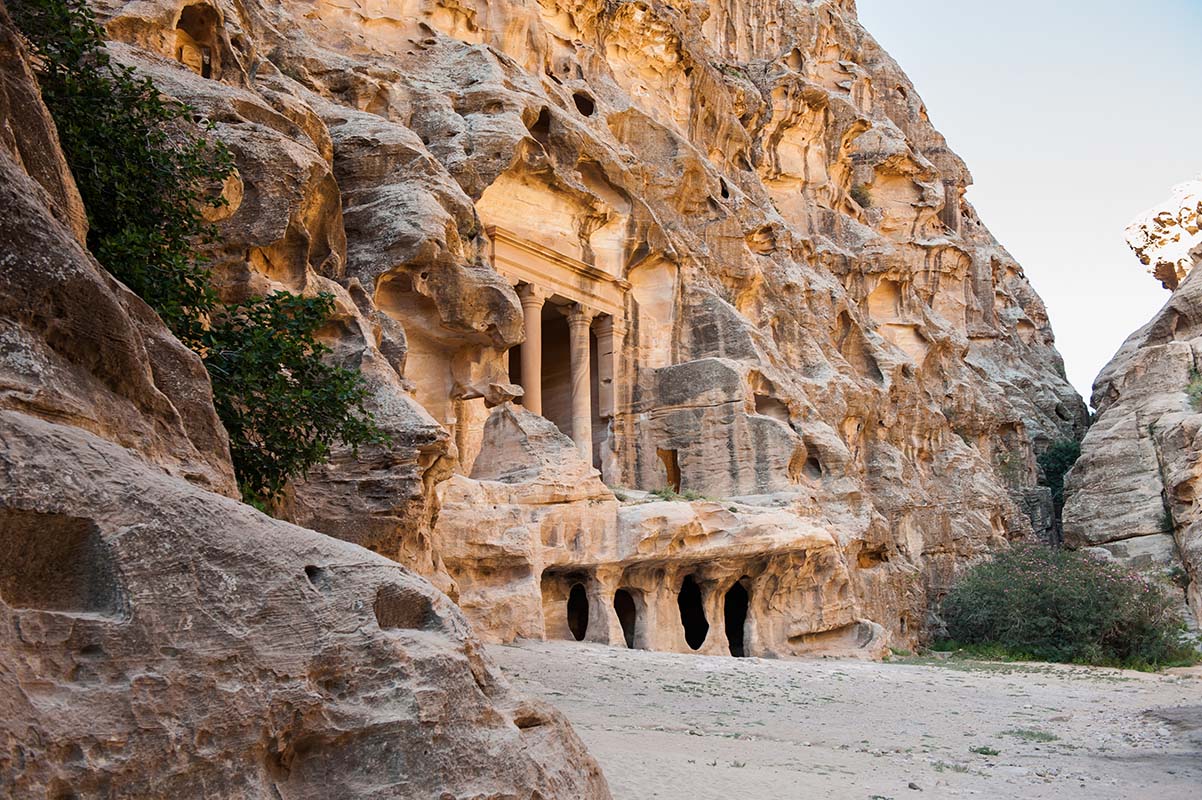 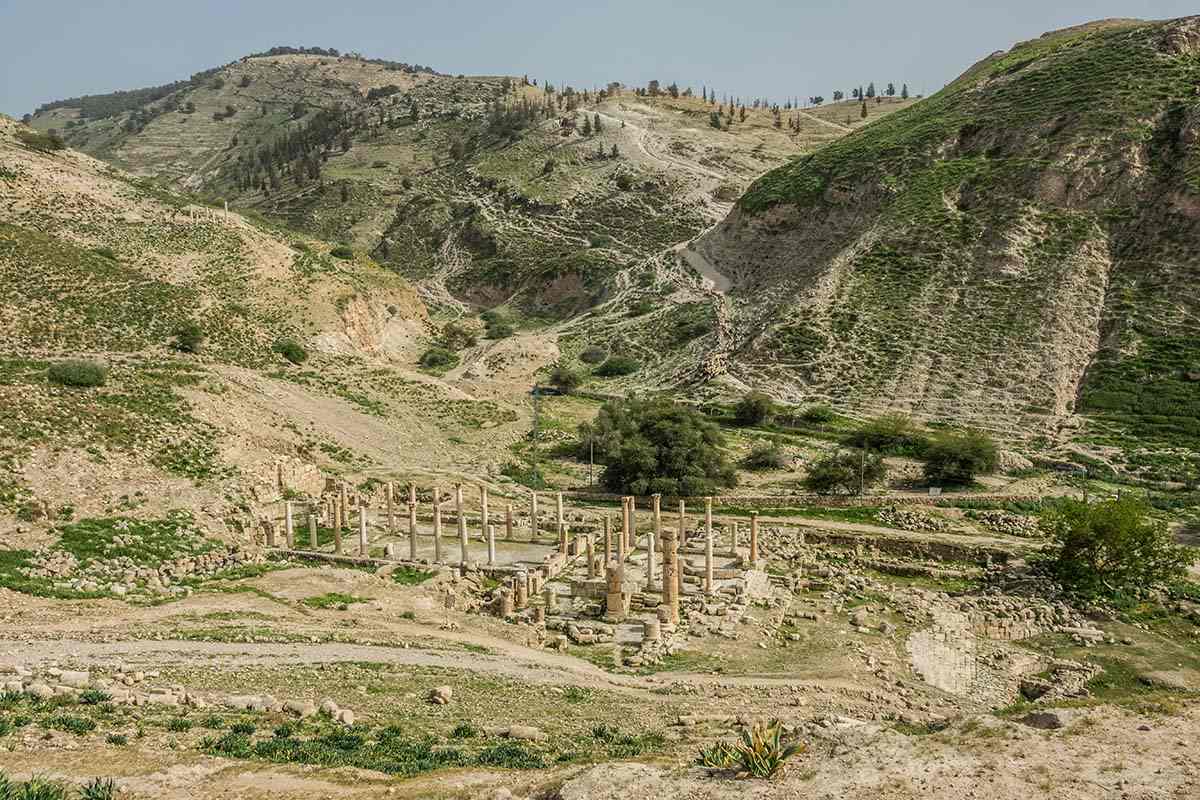 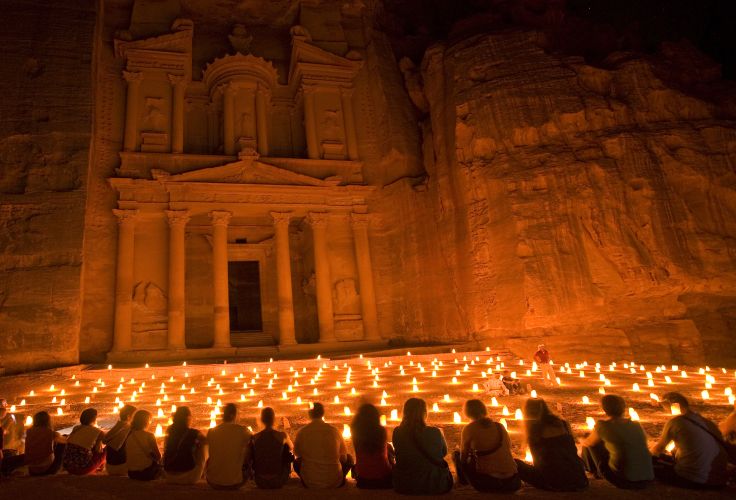 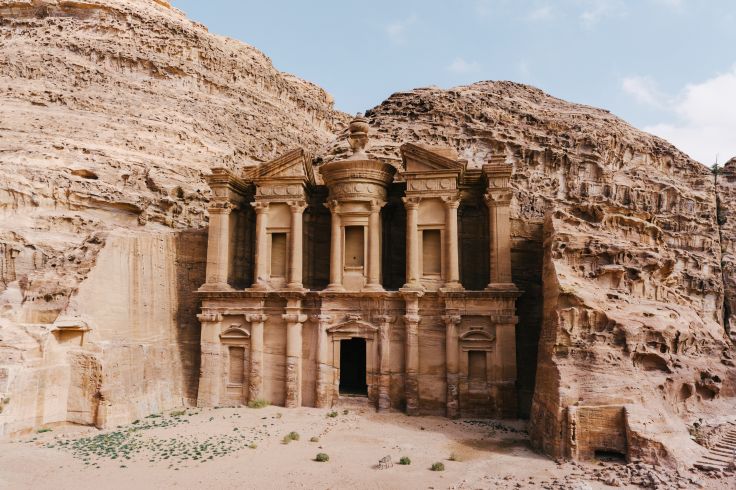 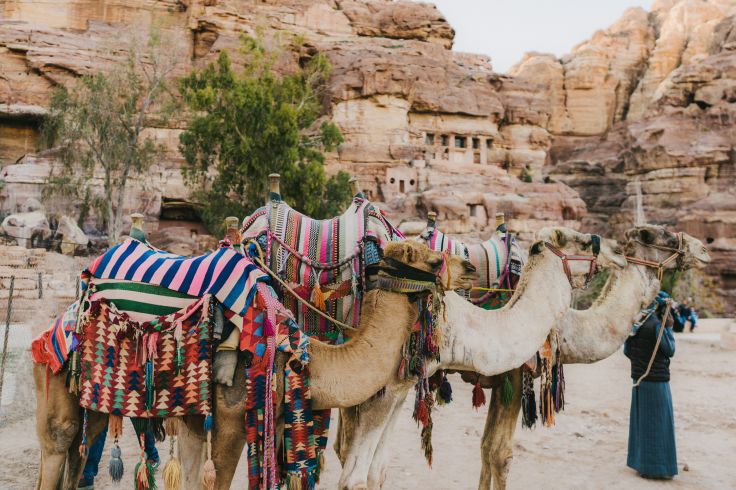 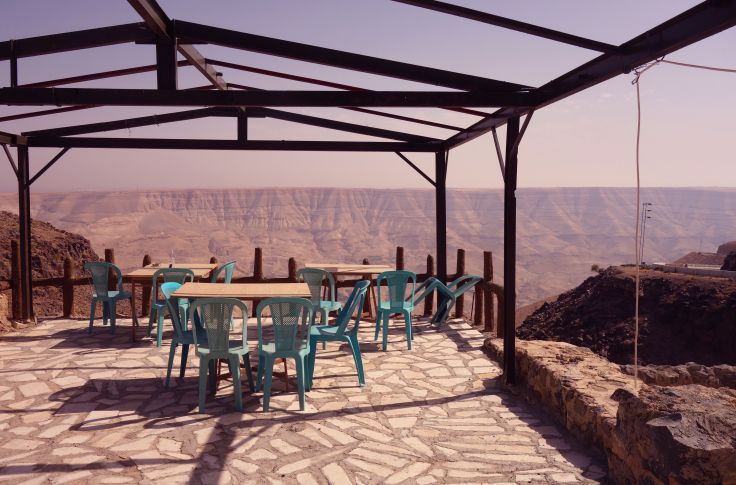 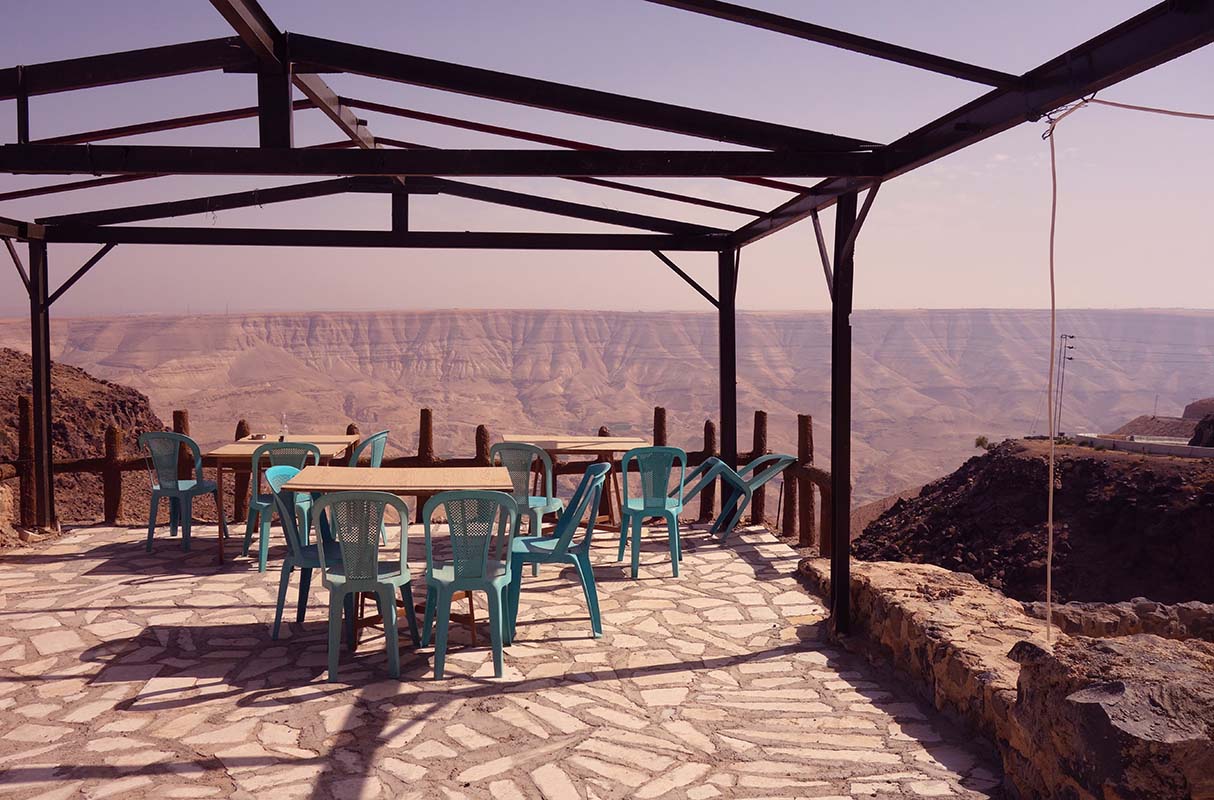