They say we're often so focused on the destination that we forget about the all-important journey. And let's face it, when you're travelling to Asia in particular, not only is it a long old haul to get there, but the modes of transport when you're there are generally more interesting than your average London bus, tube or train. With Myanmar opening up as the next big magnet on any traveller's bucket list, here's an insight into exploring this vibrant country, whether in the fast lane or floating peacefully above it all.

Locally known as 'the bicycle city' just 25 years ago, the traffic lights and road signs (or lack thereof) now fail to keep up with the thickening flow of motorbikes, cars, trucks and trishaws across this bustling city (or as close to a city as you can imagine without any skyscrapers). During my journey to the hotel I was told that local drivers have an unwritten law of the road and they don't need such trivial modern things as traffic lights. Instantly this terrified me, but you quickly realise it's true. Somehow local drivers know which roads are one-way; when to give a crowd of pedestrian monks right of way; and when to accelerate full pelt through crossroads. This is the rhythm of life in Mandalay.

So it may not surprise that in deciding to get on a moped, I did so heading out to the outskirts of the city, to the old capital of Amarapura. I pictured myself weaving through traffic, pedestrians and bullock-carts, wind in my hair, feeling like a local - perhaps I'd even sit with both legs to one side like a real pro. But the reality was somewhat slower, much more cautious, and I arrived with my hair definitely more in the region of slicked-back sweaty helmet hair than windswept biker chick.

At Amarapura you can see the infamous postcard scene of U Bein Bridge jutting out of the river, complete with fabric-draped women carrying their baskets to market, and waist- deep fishermen drawing in their nets below. A walk along the bridge reveals fruit sellers (mango dipped in chilli flakes anyone?), artists and the inevitable souvenir floggers, though all much gentler than their Thai counterparts.

Another fantastic half day trip from Mandalay is catching a boat 30 minutes up the Irrawaddy to Mingun. Stilted villages and golden stupa-studded hillsides form the backdrop to your journey and on arrival you are greeted by a donkey pulling a wooden wagon with the word 'taxi' painted on the side.

Ballooning and Bicycling in Bagan

A 20 minute flight (or more of a hop at 8,000ft) from Mandalay takes you to the iconic temple-strewn landscape that is Bagan. This rural land of 11th century pagodas is a world away from the hustle and bustle of urban Burma; so much so that it is not hard to believe that the surrounding villages have only just welcomed electricity. The way to explore this archaeological expanse is to hitch up your longyi and jump on a bicycle. With over 2000 ancient temples and stupas spread across 100km2 of flat plains, even the slightest elevated position gives the most magnificent 360 panoramic views. I picture Rudyard Kipling to have been standing atop one of these temples when he wrote 'This is Burma, and it is quite unlike any land you know about'. If you have a head for heights and hot air ballooning is on your list, this is without a doubt the place to do it.

Any Inle Lake adventure begins with stepping aboard a long tail motorboat and settling into a precariously placed wooden garden chair, ready to zip down the channel from Nyaung Shwe into the heart of the lake, framed by mountains on both sides. But it's not the wide open body of water I had expected; the lake is in actual fact a labyrinth of waterways between grassy banks flanked by houses perched on stilts and floating vegetable patches anchored by tall bamboo poles. Children row past on their way home from school while waist-deep fishermen reel in their nets. The reeds and banks get thicker toward the edges of the lake and our driver announces that the way to our hotel is overgrown to the point of closure. He turns off the engine and begins scooping his way through greenery and lily pads until we can glide through the thicket. He kicks off his flip flops, tightens his longhi, and completes our journey by showing off the traditional one-legged rowing unique to Inle Lake.

Yangon is a booming metropolis, at times gridlocked with traffic, so once you've had a chance to gawp at the once majestic (and now tragically crumbling) colonial buildings by foot, hop on the city's circle train into the outskirts. The station is a time warp in itself, where there's even an old school set of weighing scales waiting to tell your fortune. With no timetables or even a known platform for each train, without a guide you could wait an hour only to realise that your train passed behind you 15 minutes ago. Even the word platform is a bit of a misnomer in Yangon. Picture a wide step between train tracks; and that's exactly how they're used: a stepping stone to get from one track to the next. No traffic guards or whistles or health and safety at all it seems - and it's so refreshing. When you find yourself on board a train (the right one or not), it is rickety and rather slow. Watch as banana vendors squeeze on amongst monks and daily commuters; turn your attention out the window to witness exchanges of daily life; and finally hop off at a local market to fully experience all the senses of Yangon.

This is the melange of Myanmar's changing paces. The long and short of it? Get to Myanmar while it remains one of the few countries in South East Asia without a Starbucks or McDonalds in sight. 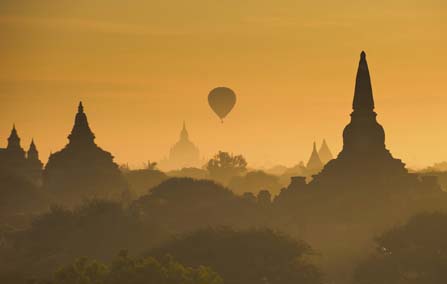 Holidays to Burma: The Land of Golden Pagodas

Ever since opposition leader Aung San Suu Kyi dropped her opposition to tourism in[...]

The ultimate photo opportunity. Burma is back, and Inle Lake is a very tranquil and[...]

Where To Stay at Ngapali Beach