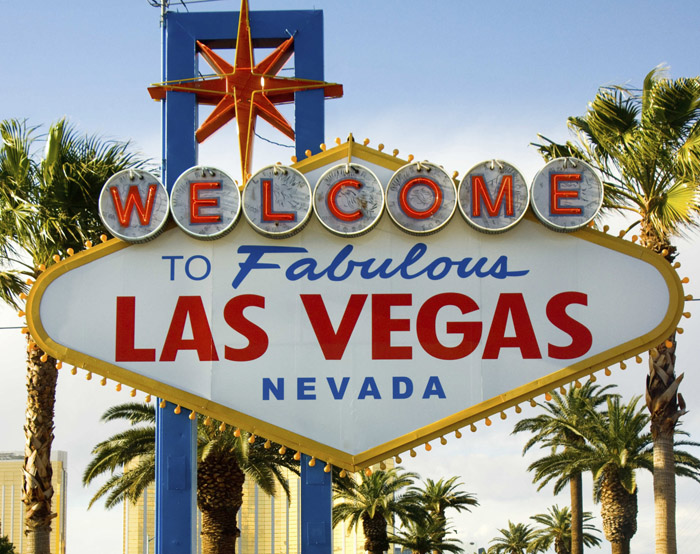 Our particularly well-travelled intern, Tom Surr, has been kind enough to share some of his experiences with us - and this is the second part of his account of a West Coast USA road trip. Having arrived in LA, visited San Francisco and Yosemite National Park, and got the lowdown on the West Coast's food on the go, part one of Tom's travels left us (quite literally) hungry for more.

Here we pick up with Tom as he sets off again, driving towards Nevada for a Las Vegas trip.

Next up was a two night stint in Las Vegas. We happened to be there during an annual event called 'Country & Western Christmas'; a week-long series of gigs and other events. As a result, the casinos were teeming with people in cowboy hats of various gallon sizes, cowboy boots and other attire, which certainly added to the spectacle of Las Vegas. Las Vegas is a very surreal place and I felt that two or three nights spent there would be enough, unless you have serious money to burn. As is true of most American cities, people drive everywhere so even the main strip of Vegas (where all the billion-dollar casinos such as the Bellagio are) has relatively few pedestrians on it during the day and even fewer at night. The further away from the Strip you go, the less salubrious it gets. Not that you'd really want to leave the strip at night, as this is where all the best shows, restaurants and casinos are, but there are some parts of Vegas it's best not to go after dark. Gambling is definitely worth a try, even if it's just so you can pocket a few $1 chips as souvenirs. The key is to set yourself a budget and to treat gambling as an activity that will last all evening, rather than as a way to make (or more likely, lose) money quickly. On a budget of $50 and through some serious beginners luck, I managed to gamble in 5 different casinos (by 11pm I found myself $150 to the good at the Bellagio roulette tables!) over the course of a night. Eventually I went home in the early hours of the morning having spent my budget but not a penny more (and with a few chips and some free decks of cards as souvenirs).

The Grand Canyon was our penultimate stop and had a lot to live up to, I felt, after the awe-inspiring beauty of Yosemite. Some sceptical/jaded locals (and tourists for that matter) may tell you that the Grand Canyon is just a large hole in the ground and is not worth the overnight detour. Don't be fooled! The Grand Canyon is a phenomenon and nothing can prepare you for its sheer size and length. It also offers a unique window into the past, as the rock strata reveal deposition of sediment, changing environmental conditions and the fossils of animals deposited over hundreds of millions of years. A helicopter tour is the best way to see the canyon in its full glory.

Our final stop was Lake Havasu City, a fairly small town in Arizona that few people I know have ever heard of. It would be an entirely nondescript, but quite picturesque, place but for the actions of one wealthy American entrepreneur, Robert P. McCulloch. In 1968 McCulloch purchased, at auction, John Rennie's original London Bridge (completed in 1831) from London for just under $2.6 million. The entire bridge was dismantled, shipped and reassembled stone by stone over the small river (by River Thames standards) in Lake Havasu City, a town which McCulloch had founded. In addition, McCulloch also purchased other London landmarks to fill the town, including red post boxes and some of the Silver Dragon Statues that denote the Square Mile of the City of London. A popular urban legend is that McCulloch mistakenly believed that he was buying the more impressive Tower Bridge, and was hugely disappointed when he flew over to London to view his purchase but decided to go ahead with the relocation to Havasu. One of my fondest memories of this American road trip, that always makes me chuckle when I am reminded of it, will always be standing on London Bridge in Lake Havasu City, looking over at where one would usually be greeted by the majestic sights of the Houses of Parliament and Westminster tube. Instead, there stands a waffle house and the Barley Brothers Brewery and Restaurant, respectively!

For more information on tailor made trips around the USA, contact Original Travel.