that call this place home. 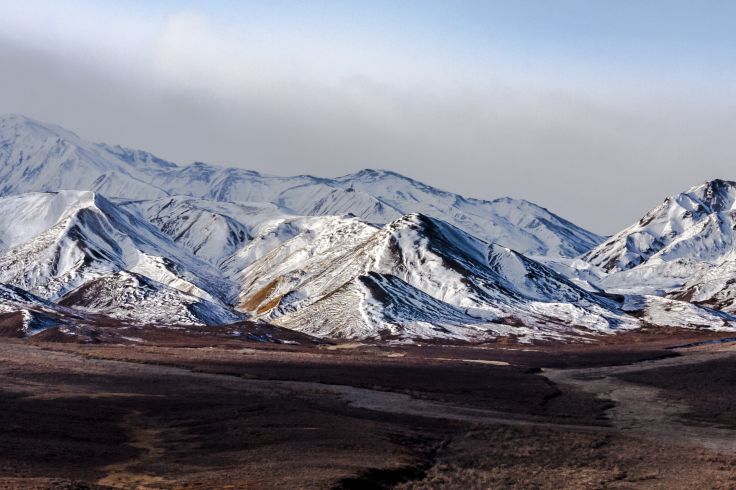 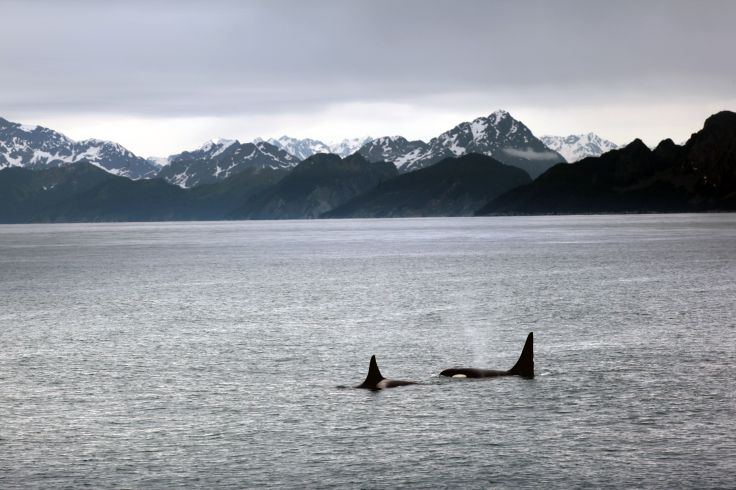 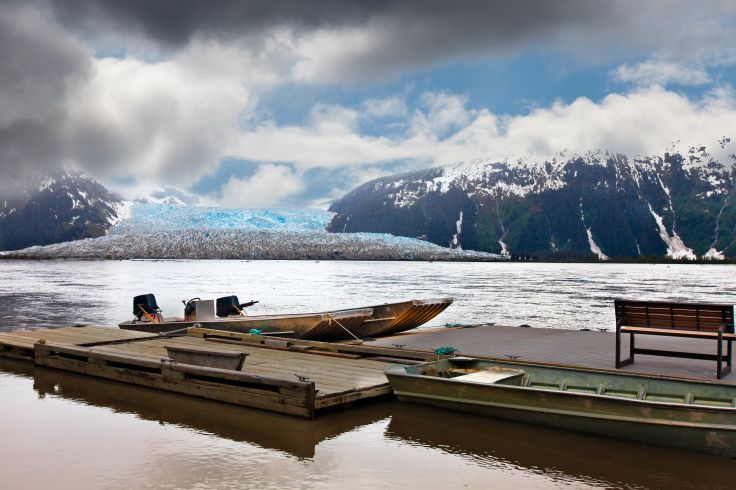 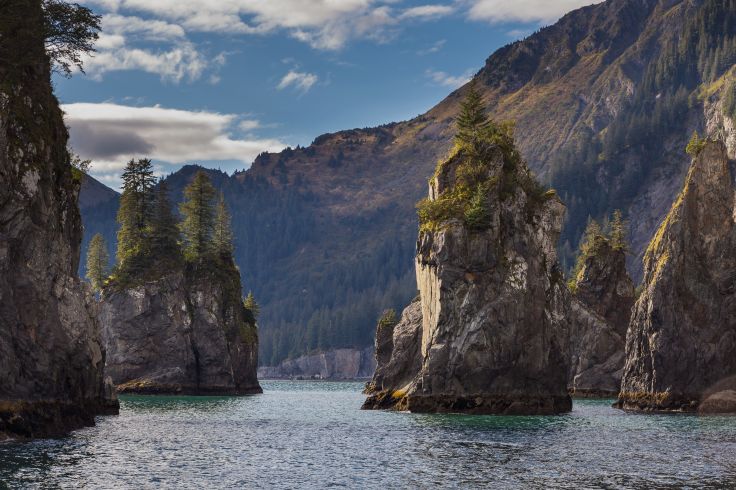 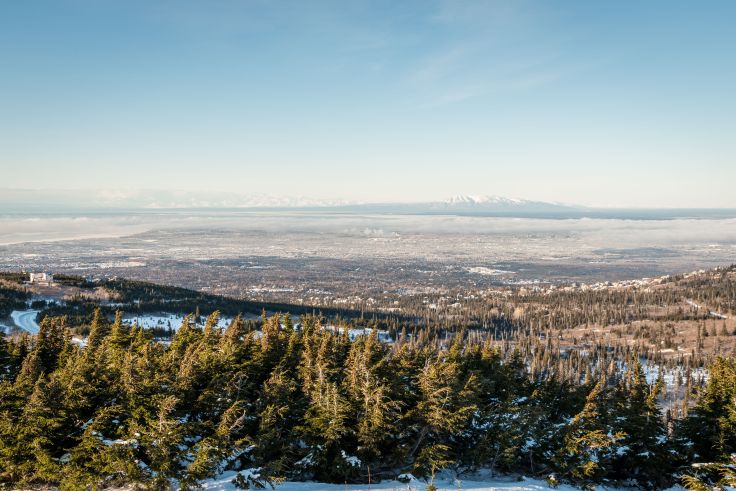 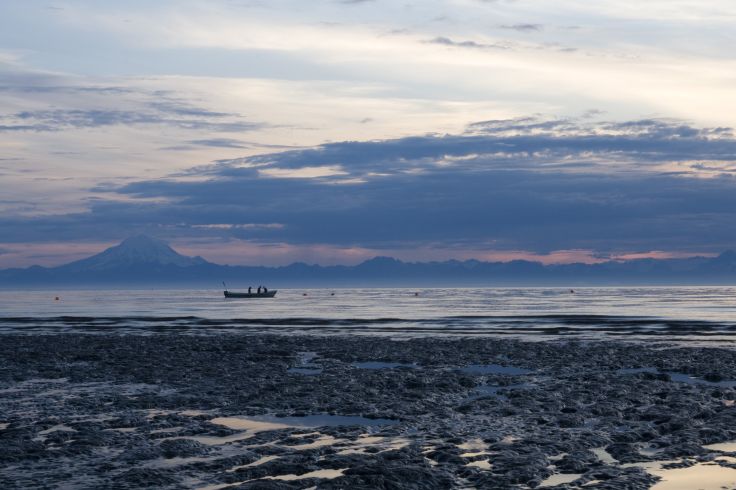 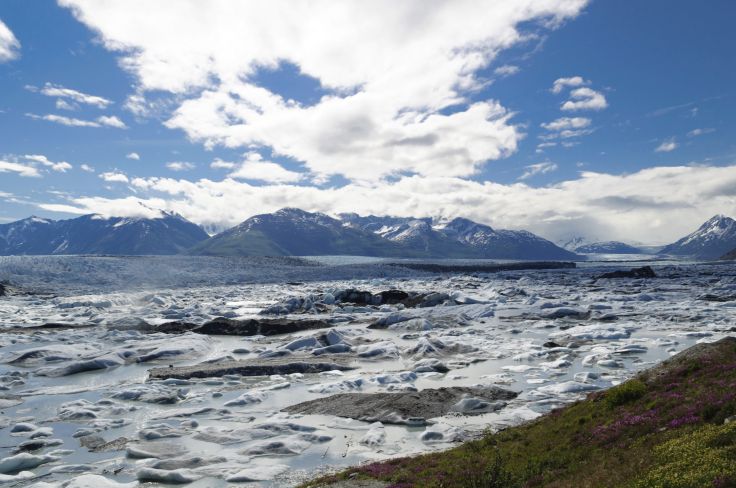 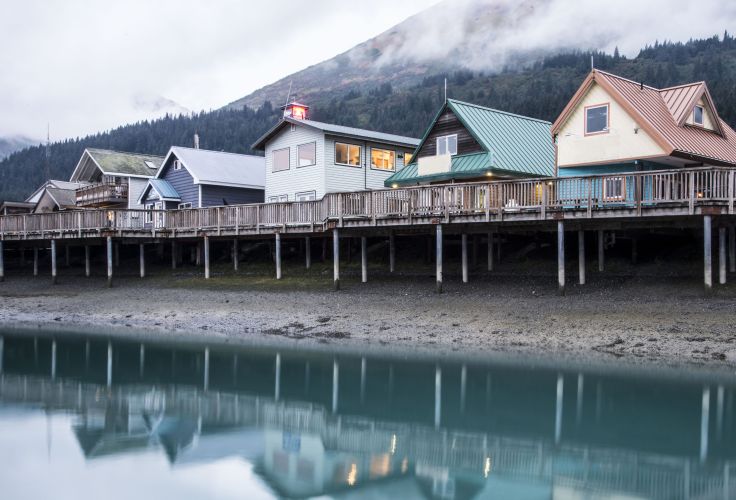 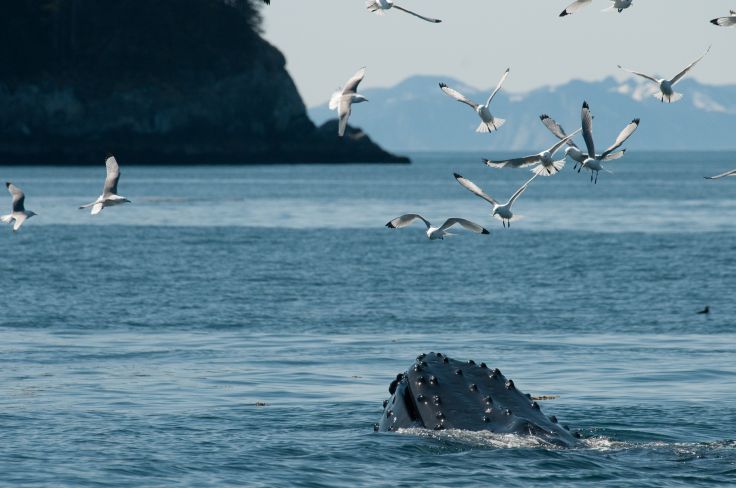 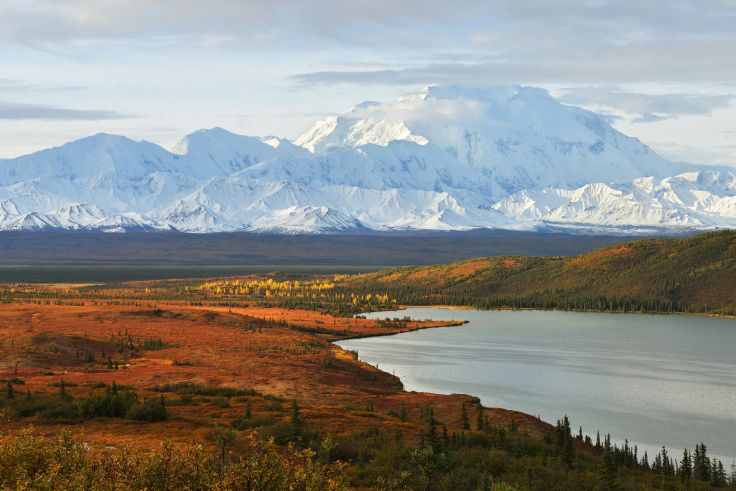 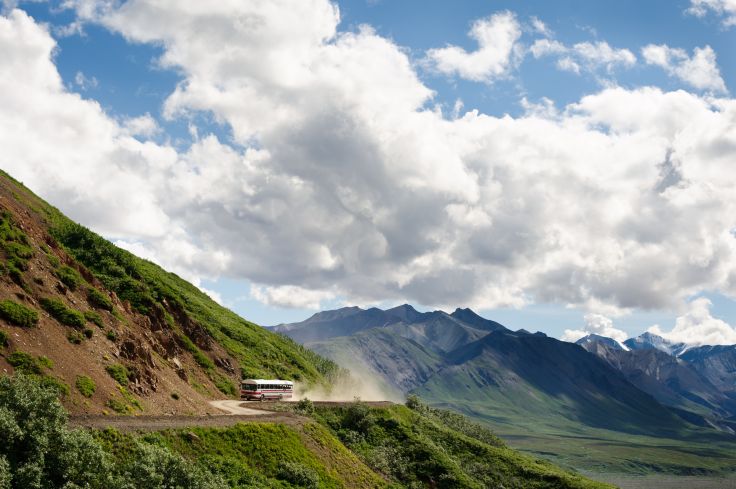 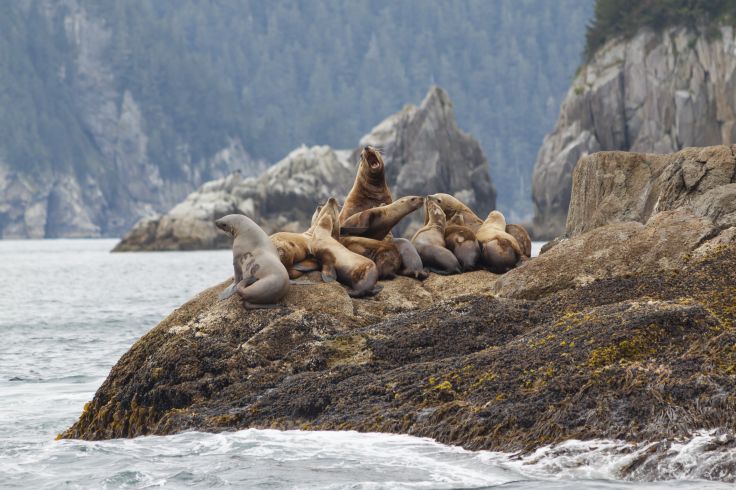 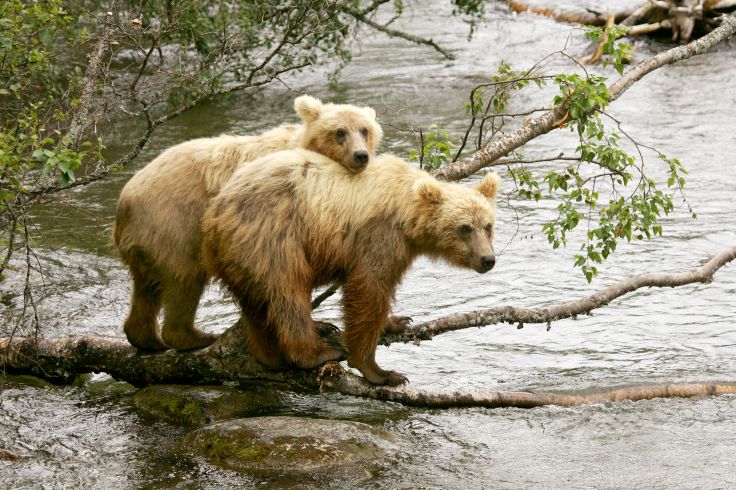 The name Alaska comes from the Aleut Native Alaskan word 'alaxsxaq', meaning 'mainland', or 'continent'. This explains why the 49th star of the American flag, bought for a handful of dollars from Russia in 1867, sets so many records. It is the largest state (twice the size of Texas, three times the size of France), with the highest peak (Mount McKinley, 20,310ft), the largest number of active volcanoes (80%) and glaciers (about 100,000), the highest concentration of bears (70% of the population of the US) and the lowest density of human population. Finally, Alaska has one of the largest reserves of gold and oil in the United States, with an 800-mile pipeline. The list goes on.
.. Mountains, glaciers and rainforests spread across this vast land mass at the end of the Americas, a refuge for exceptional animal and plant species. Alaska is almost virgin territory that has remained untouched and mercifully unspoiled by humans.

Two weeks allows you to size up this wilderness amid mountains, glaciers and fjords. After a first night in Anchorage, this adventure leads you into the heart of Alaska's national parks: Denali, overlooked by Mount McKinley, Wrangell St. Elias, the Kenai fjords, with abundant marine wildlife, and Ketmai Park : bear territory. En route, ride into the virgin areas in a school bus, see the remnants of the Gold Rush at Fairbanks, put your crampons on at the Root Glacier, fly over the moraines of the Knik Glacier in a bush plane and sail through the fjords. And come face to face with the brown bears – there's 100% chance of seeing them in summer. At each stop we have selected accommodation chosen for its privileged location, as close to the sites as possible, and thrown in a rustic touch or a cosy chalet here and there. There are included activities throughout the journey; and you can add others as you go. These activities are sometimes in small groups and include a guide and equipment, so you can focus on what's essential. And as for the rest, you have enough time to venture forth freely, and to widen the experience. Remember, you have the assistance of our clued-up local Concierge and their team, who can be reached at any time to meet last-minute needs.

Collect the hire car and spend a night in a small country cottage, a contrast with the modern feel of downtown in Alaska's capital. A stone hearth warms up the main living room where breakfast is served.
Optional - Depending on when the flight arrives, there will be a photo safari at sunset, through the city. Hopefully the northern light will show.

Optional - The guided tour of Anchorage and the Native Heritage Centre, a living museum that retraces Alaska's indigenous history and culture.
Drive north to Denali National Park, about 250 miles from Anchorage. In this majestic park, with its vast wilderness and snow-topped peaks, any memory of the great distances crossed to get there fade away. Spend two nights on the edge of the park, in a welcoming, rustic wooden lodge nestling beside the river.

In your itinerary - Guided day tour of the park. Entry is at mile 237 on the Parks Highway. Private vehicles are not permitted inside the park; only school buses with nature-guide drivers circumnavigate a 53-mile loop offering wonderful glimpses of this natural setting. Along the way, watch for bears, caribou, elk, sheep and wolves. And weather permitting, it's also possible to see Mount McKinley, the tallest peak on the North American continent at 20,310ft.

Road along the Alaska pipeline from Prudhoe Bay in the north to Valdez in the south, through the rugged landscape, with Mount McKinley still dominating in the background.. Along the way, stop in the small town of Healy before reaching Fairbanks, where you'll spend the night. This former trading post, the second largest city in Alaska, was founded on the banks of the Chena River and still harks back to the Gold Rush.
Don't miss - Pioneer Park, a reconstructed typical Gold Rush-era town: authentic historic buildings salvaged from around the state and actors in period costumes. Take a bath in the hot springs of Chena Hot Springs.

Long road (about 248 miles again) due south on the Rirchardson Highway towards Copper Centre. Discover the towns of Paxson and Delta Junction along the way, nestling in the forest among mountain scenery. Stop for the night in this little picturesque riverside village, with wooden houses and a few hundred inhabitants. Overnight in a pleasant lodge facing the mountains.

Road to Chitina then flight to Kennicott by bush plane. This 30-minute tour offers the first (and spectacular) viewing of the landscapes of Wrangell St. Elias National Park and the first glimpse of the Root Glacier. Spend two nights in the former Kennicott miners' base, which was converted into a small tourist resort and is the starting point for many outdoor activities. The lodge occupies an old copper mine overlooking the glacier, with strikingly beautiful surroundings. You'll receive a warm welcome, share a meal, and go to bed early. You'll need rest before the next day's discoveries.

Kennicott and the Root Glacier

In the itinerary - Guided hike at the Root Glacier and visit Kennicott. A two-mile trail from Kennicott follows the old railway line built in the 1920s. After arriving at the foot of the Root Glacier, put your crampons on and begin the glacier walk, Along the way, there are several torrents that have carved deep crevices in the ice, forming a collection of blue pools and waterfalls. The day continues with the discovery of Kennicott's mining past, still with your guide.

Take the return flight to Chitina by bush plane, collect the car and head west to Knik Glacier. This is located at the northern tip of the Chugach Mountains. At 30-miles long and five-miles wide, this is one of the largest glaciers in Alaska.
Don't miss - A boat trip to see the multicoloured icebergs.
Spend the night at one of the cosy cottages nestled in the middle of the forest, in wild and remote surroundings.

Head south to Seward, a lovely fishing harbour in the heart of Resurrection Bay. It's also the starting point for the exploration of Kenai Fjords National Park.
On the way - Don't miss: a visit to Musk Ox Farm in Palmer, home to the world's only domesticated musk oxen. Native Alaskans use their wool to make traditional garments.
Stay for two nights in a lovely large structure built on stilts, opposite the harbour. There's the added bonus of an indoor pool, rare in Alaska.

In your itinerary - A day of cruising in the Kenai fjords : A 100-mile journey between glaciers and coastal landscapes and an opportunity to get close to the region's wildlife: otters, sea lions, seals, killer whales and humpback whales.

Drive to the southern tip of the Kenai Peninsula and the small fishing village of Homer, a four-and-a-half-mile stretch of land at the edge of the world, in the heart of a beautiful iceberg-filled bay. Settle there for two nights in simple, comfortable motel-like accommodation which marks the end of the road and the tip of the peninsula. Spotlight: the panoramic views of Kachemak Bay and Kenai Mountains.

In the Itinerary - Katmai National Park Exploration Day in search of brown bears . First, enjoy a spectacular flight in a bush plane over the active volcanoes and glaciers of the east coast of Katmai National Park. After landing on the beach, take a beautiful walk and observe brown bears in their natural environment: they fish, dig for clams and play together. If you're lucky, you might also see foxes, bald eagles and marine mammals.

Return road to Anchorage (it takes just over four hours), where you'll find your home for the night downtown.

Return your hire car and catch your flight home. Overnight flight, arriving the next day.

A bespoke experience for photography enthusiasts. The light shows at the end of the day can be dazzling. Discover Chugach State Park and Anchorage, on a trip that can be adapted to suit everyone's preferences. This activity is open to everyone, and does not require any special photographic equipment.
Optional

Explore Anchorage in the company of a local guide to discover its main sites and historical features, such as Earthquake Park and Lake Hood. This is the opportunity to learn more about the local culture, with a visit to the Alaska Native Heritage Centre, and hear about Alaska's indigenous culture through authentic tales, songs and dances.
Optional

Board the Riverboat Discovery III, the last authentic paddle boat in Alaska, for a cruise on Chena River and Tanana River to explore the area's history. Meeting sled dogs, discovering the 'confluence of the two rivers' and taking off in a seaplane are original ways to learn more about the indigenous culture and Alaska. This cruise takes about three hours.
Optional

The majority of the island is a designated National Nature Reserve that aims to preserve Kodiak bears, a subspecies of brown bear. Fishing is plentiful, especially for salmon, halibut and crab. The island is also the ancestral land of the Koniaga people, who for a long time lived by hunting, fishing and gathering, and whose descendants still live there. Two days on the island is a chance to observe bears in their natural environment and discover the picturesque landscapes of the island from above. This itinerary includes round-trip flights between Anchorage and Kodiak, overnight accommodation, car hire for two days and a seaplane ride.
Optional - Two days/one night

Dependent on season, accommodation and activities
June to early September The estimated cost for this trip is £7,400 to £9,100 per person. The final cost of the trip depends on the way we tailor it especially for you. The final cost varies according to several factors, which include the level of service, length of trip and advance booking time. The exact price will be provided on your personalised quote. The average price for this trip is £8300 per person.
A few of the benefits of travelling with us