Most hotels bang on about service, but few walk the walk as well as they talk. Not the Mandarin Oriental Hong Kong, though. The flagship of the MO brand opened its doors back in 1963, and after a well-judged refurb in 2006 this remains a hotel with gold standard service.

The rest of the set up isn't so bad either. The 501 new style rooms (including 71 suites) are some of the largest of any on the island of Hong Kong, with cavernous bathrooms to match and wonderful views from the higher floors of Victoria Harbour. Needless to say the in-room gadgetry is also cutting edge, with plasma screens in the bathroom and touchscreen lighting that's slick without requiring a degree in astrophysics to operate.

The views are even better from the top floor, home to Pierre, the eponymous French restaurant from three star Michelin man Pierre Gagnaire. If that doesn't appeal (unlikely, we know), then take your pick from the nine other restaurants and bars in the hotel, including more Michelin stars at Cantonese specialising Man Wah and Mandarin Grill + Bar for grills and seafood. Only slightly less salubrious but equally excellent eateries are the informal Café Causette, the club-like British food-focused Chinnery and the Clipper Lounge for buffet meals and afternoon tea. The piece de resistance is then the Mandarin Cake Shop, which does exactly what is says on the cake tin.

Of the thirst quenching establishments, the Krug Room is dedicated to the champagne brand and tasting menus designed to complement the fizzy stuff, while cocktails and other drinks are available at both the Captain's Bar, and the M bar with its unbeatable views of the Hong Kong skyline.

The two-storey spa has eight single and two couple's treatment rooms and the emphasis is on treatments using the principles of traditional Chinese medicine. There's also a fitness centre with kinesis studio, lap pool, salon and even barber shop.

And then, of course, there's the fabled service, from the washroom or poolside attendants to the waiters, doormen and bartenders, it would be hard to find more professional staff than here.

The views of Victoria Harbour and the city skyline from the M bar are breathtakingly good. As are the cocktails.

Other Places to Stay in Hong Kong 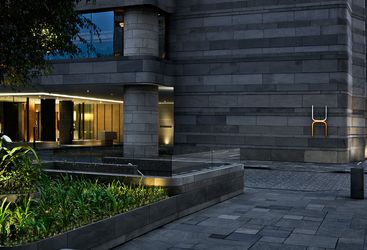 Sister property to the Opposite House in Beijing, the Upper House is the second slick hotel from Hong Kong mandarins the Swire Group, who are...
Find out more Add to Ideas+

Rosie and Frances are our 'Mandarin Oriental Hong Kong' experts and as seasoned travellers they have the inside track on the most memorable adventures.