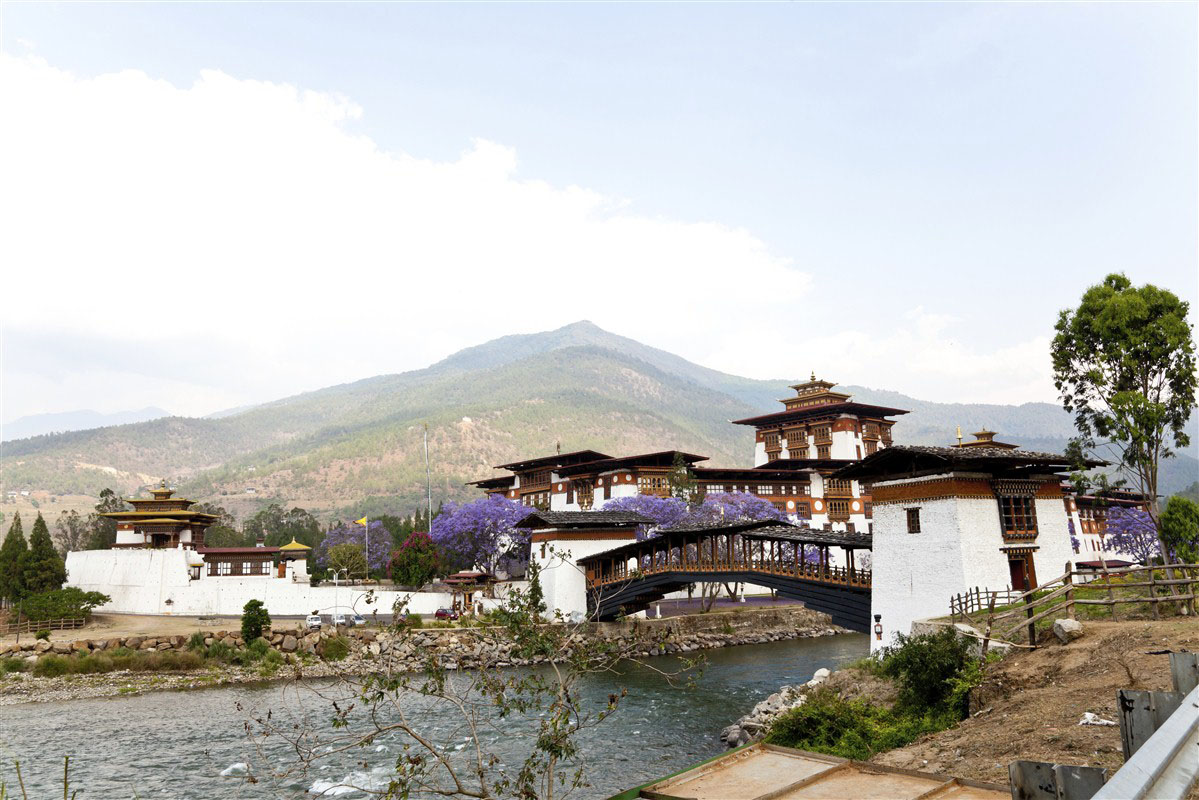 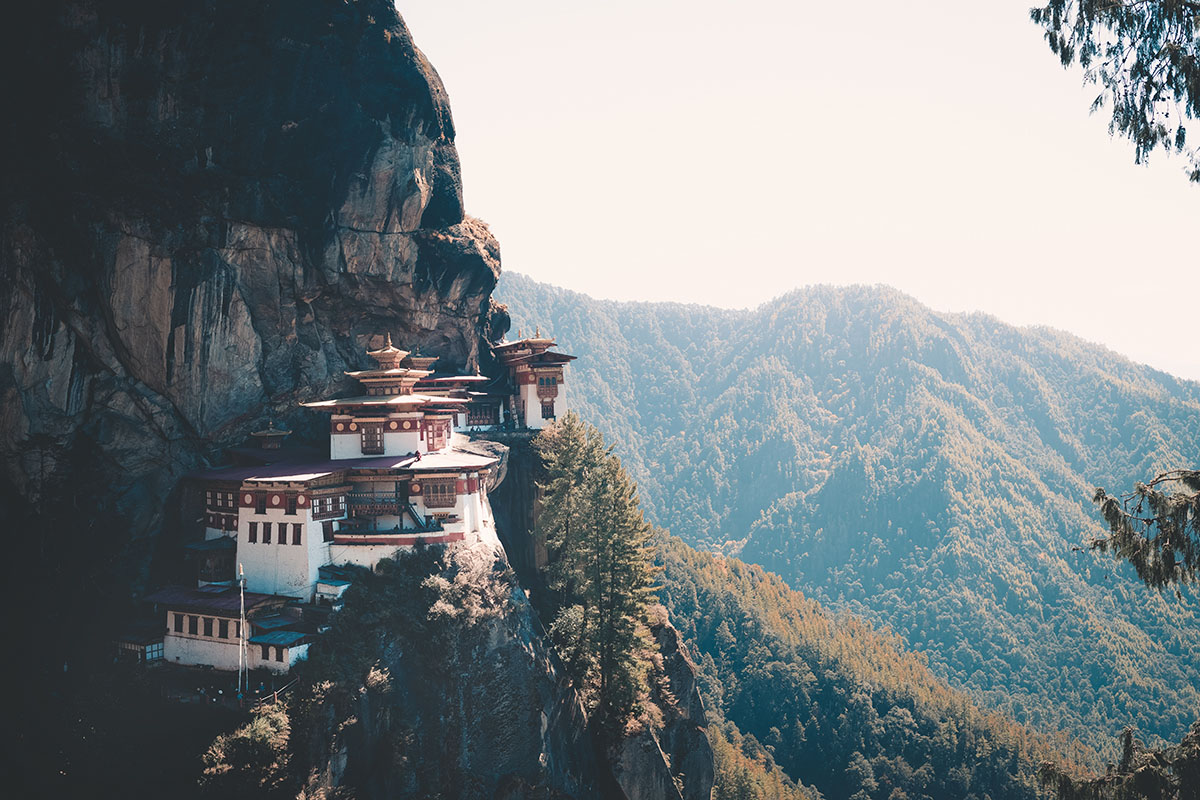 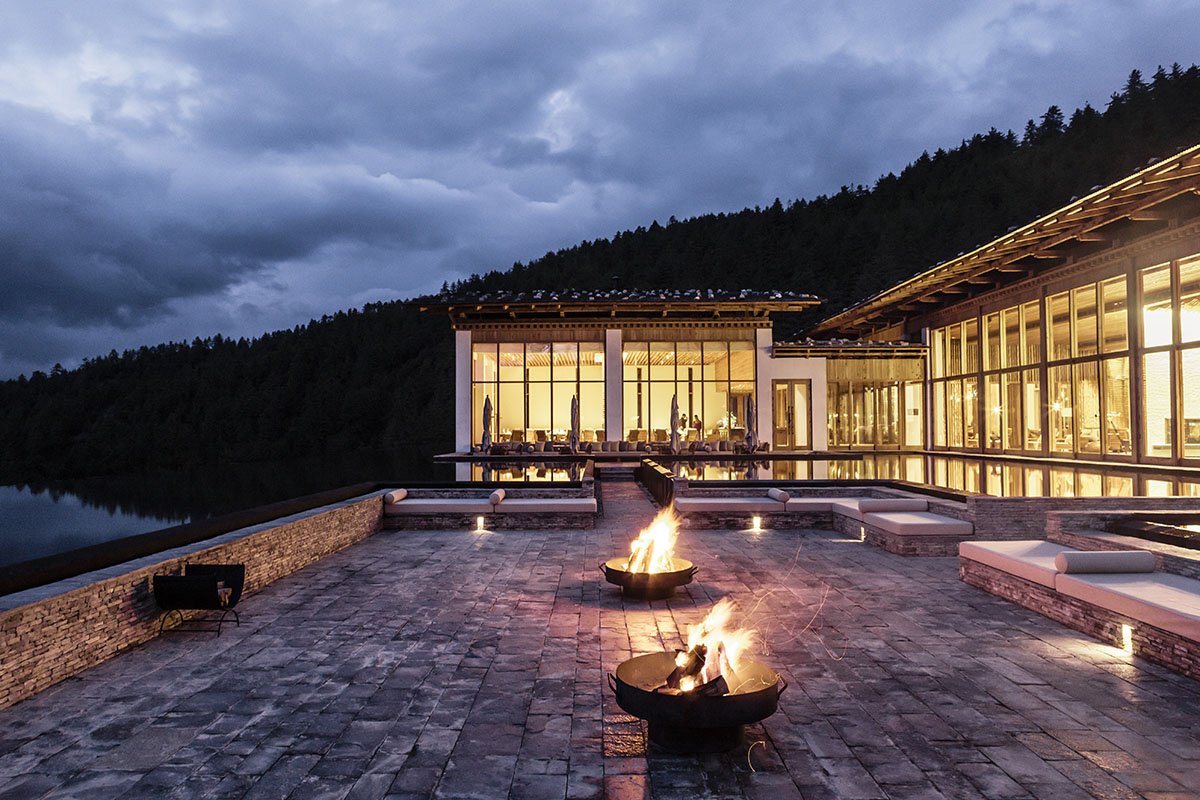 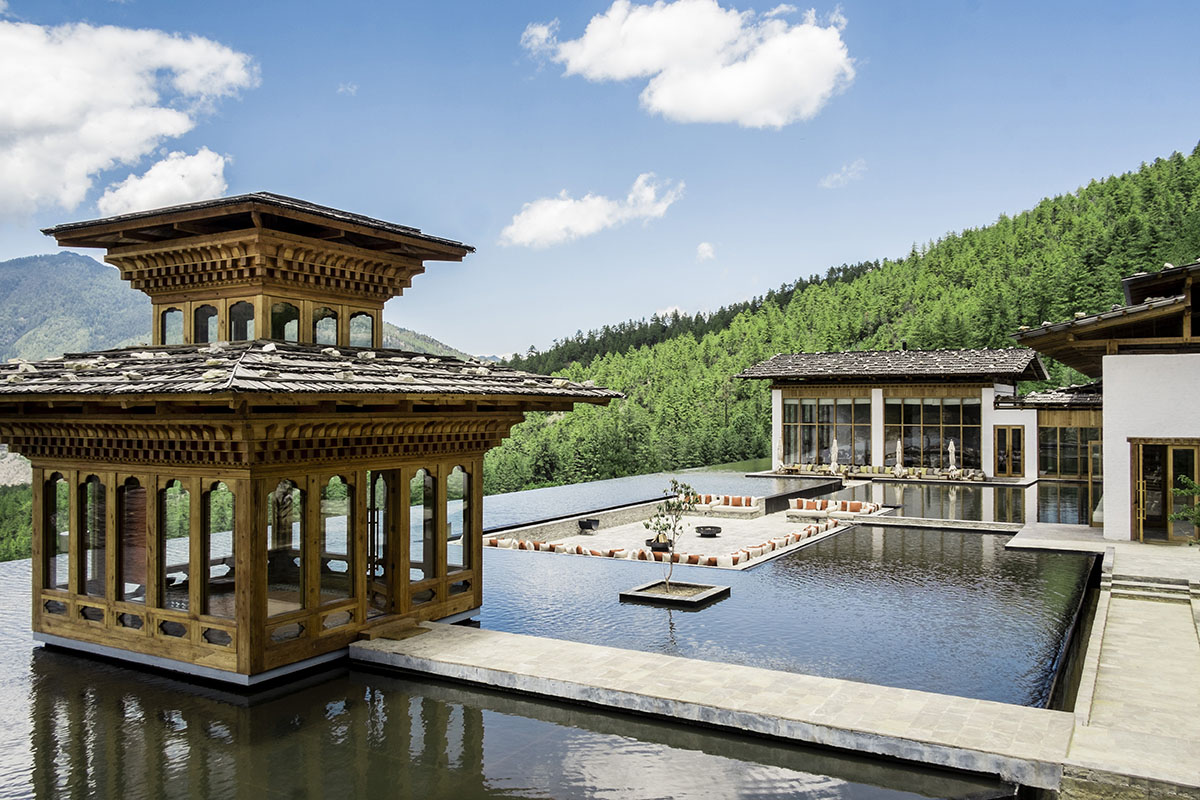 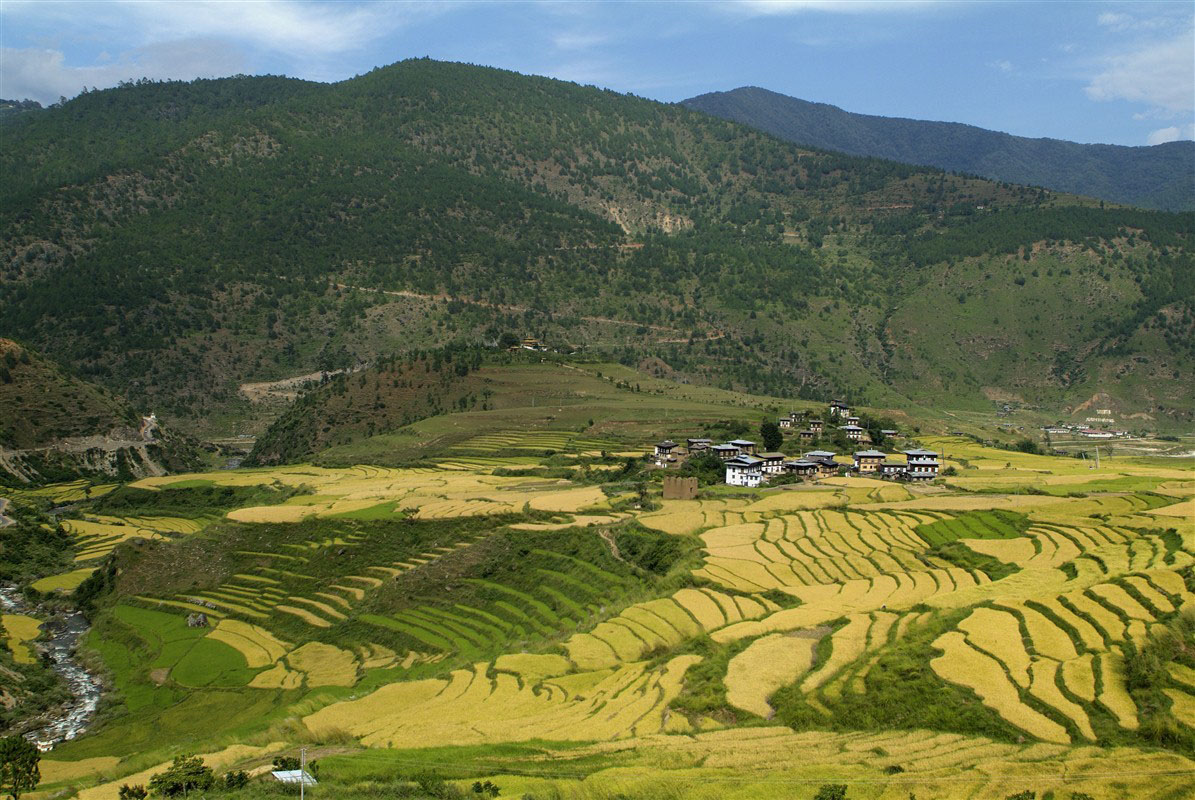 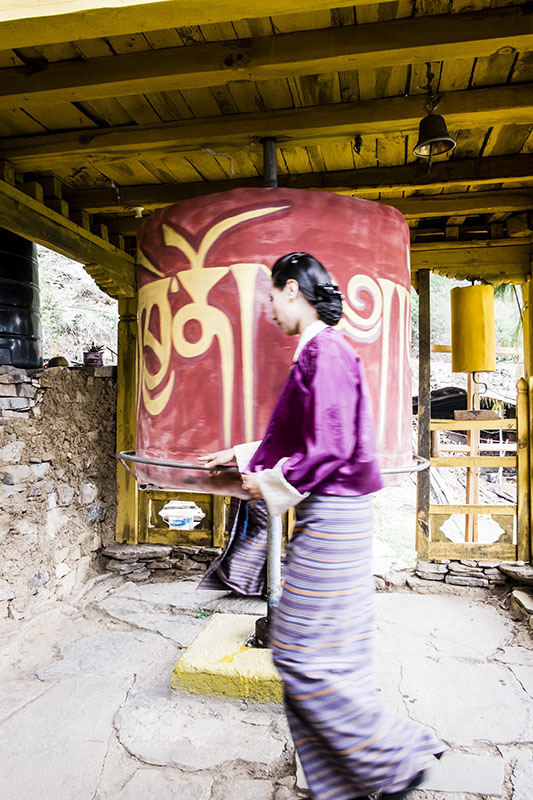 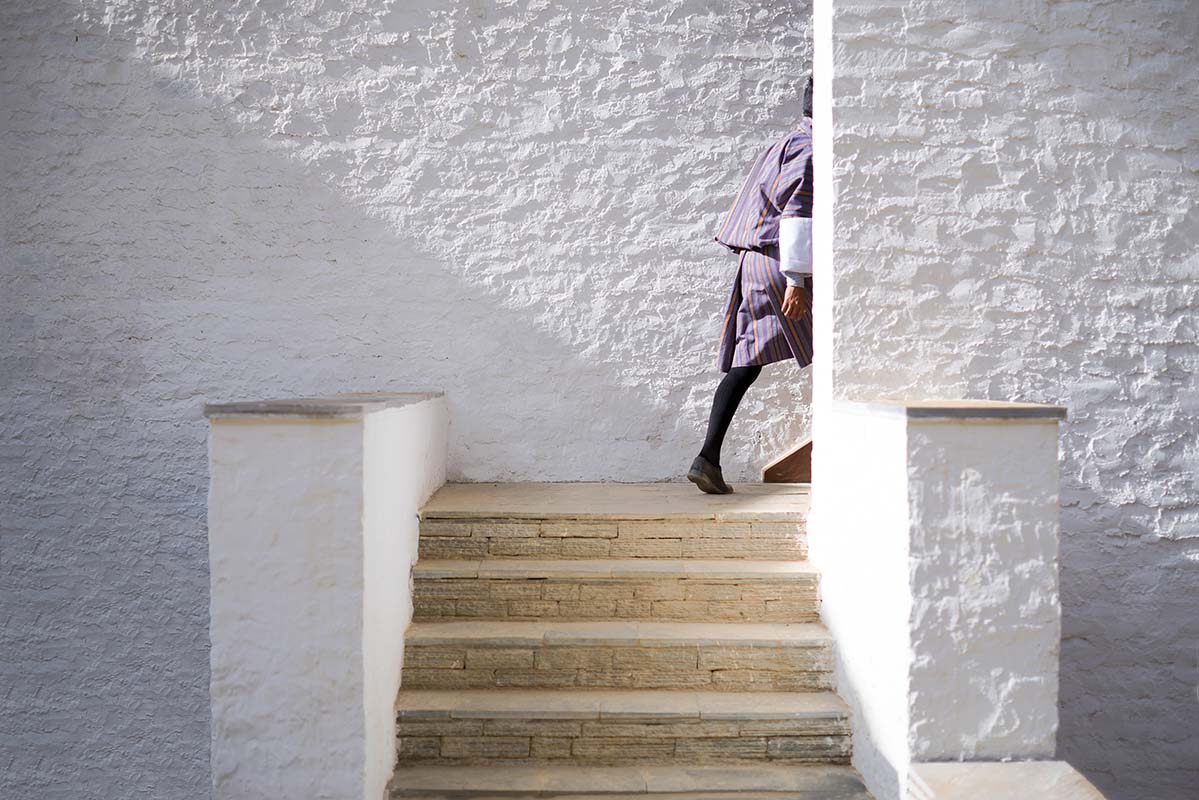 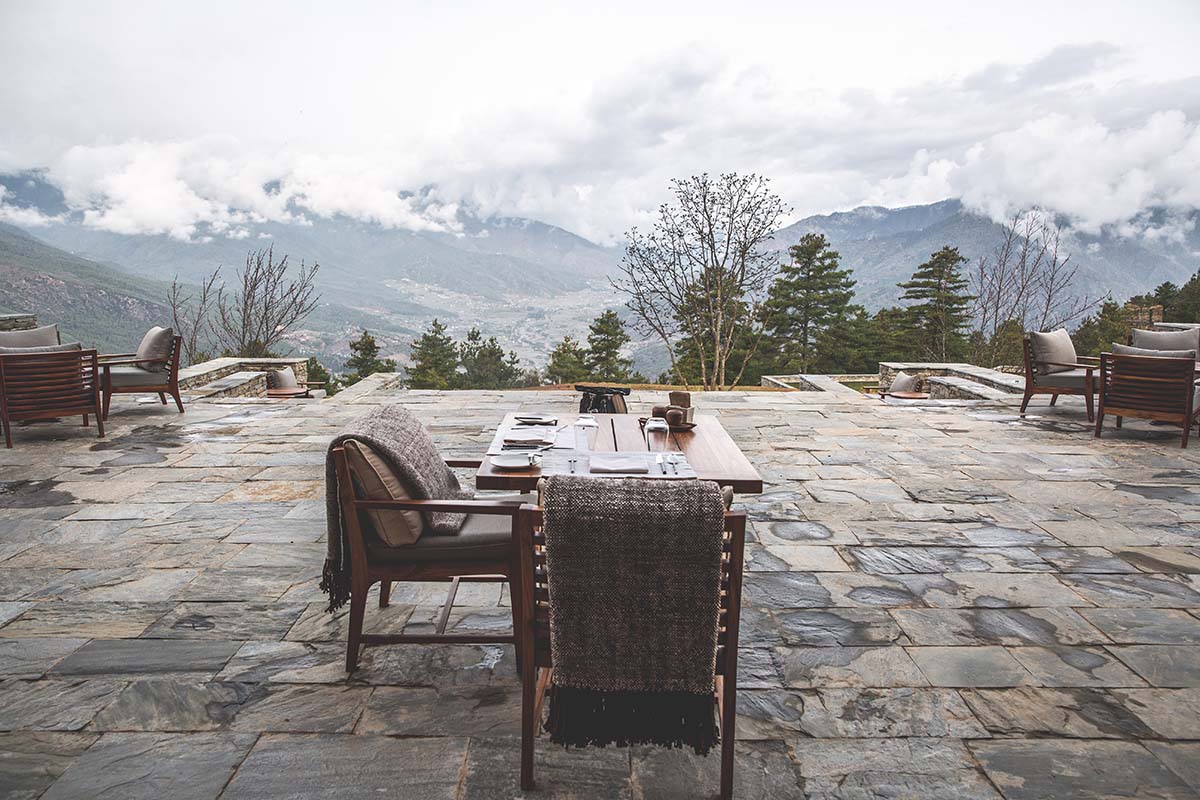 Isolated by the high peaks of the Himalayas, Bhutan is a small, green and peaceful enclave that has been preserved from the outside world. This Land of the Thunder Dragon - so called because of the thunderstorms that often move through the country - still holds on to its ancestral language, rites and customs, which you can learn about during your journey. For more than 40 years this small kingdom has been at the forefront of new ideas based on four pillars: environmental protection; conservation and the promotion of culture; good governance; and sustainable and responsible economic development that takes into account the quality of life of the people rather than their ability to produce.
The country is measured by a 'Gross National Happiness' index which prioritises the wellbeing of the Bhutanese people over any other measurement of success. Despite its gradual opening up to the world, this kingdom remains a relatively untouched place, where monks continue to practice unreformed Lamaic Buddhism.

The highlights of a first trip to Bhutan

Thimphu, Paro and Punakha are the country's three western valleys, located at an average altitude of 8,200ft. The valleys are linked together by high passes and are dominated by beautiful monastery fortresses with dzong architecture that is characteristic of traditional Bhutan. This trip invites guests to explore the landscapes and iconic places in the kingdom such as the 'Tiger's Nest' of Taktsang, a monastery perched in the Paro valley. Your stops are punctuated by private guided tours that give you a thorough insight into the country and its wonderfully welcoming population.

As well as Calcutta and Kathmandu, Delhi is one of the main gateways to Bhutan. Spend a night at Radisson Blue Plaza.

Fly to Paro and drive to Thimphu, situated in a valley at an altitude of over 7,800ft. Combining tradition and modernity, the country's political and economic capital is now expanding rapidly but it remains a quiet and pleasant town. Dynamic and culturally vibrant with markets and local crafts, it's a must-see in Bhutan. Finish off the day with some free time to spend as you please. Your hotel for the next two nights was built by a Japanese architect whowas inspired by Bhutanese design, and is located in the heart of Thimphu.

There are three main visits planned during the day. The National Memorial Chorten was built in the 1970s by the royal family: its paintings and statues are a reminder that Bhutan is the only Buddhist kingdom in the world. Then you'll discover Tashishlo Dzong, 'fortress of the glorious religion', which today serves as the seat of several ministries. Finally, you'll visit the National Library which is home to many treasures of Buddhist literature.
Depending on the weather, you can easily walk up the hills to the small Wangditse Gomba monastery where, amongst the flowers and prayer flags, the views of the valley and the vegetation are very beautiful.

The road to Punakha goes all the way up to the Dochula Pass, more than 9,800ft above sea level. You'll get a spectacular view of the Wangdi Phodrang mountain range. A former winter capital of the Kingdom of Bhutan until 1962, Punakha is one of the country's 20 dzongkhags (districts). It is full of vegetation, rhododendrons, laurels and magnolias, all of which enjoy the very mild micro climate. Here lies the embalmed body of Shabdrung Ngawang, founder of Bhutan, who disappeared in 1651. The region is full of artistic riches and you cannot think of Punakha without Punakha dzong coming to mind. Punakha dzong is nicknamed the 'Palace of Great Bliss' and is one of the oldest in the country. The first king of Bhutan was crowned in 1907 and the spiritual authority of Bhutan still has winter quarters there.
Included in the itinerary - A visit to the dzong, which has strategically dominated the meeting point of the Pho Chu and Mo Chu rivers since 1637. In the past it was damaged by fires and an earthquake, however, it has recently been beautifully restored.

Head to Paro, the gateway to and from your Bhutanese journey. Situated at an altitude of 7,300ft, Paro is surrounded by beautiful mountains. In the heart of the Paro Valley, the town is dotted with rich vegetation, a multitude of small, picturesque villages and ancient buildings. Up above, the Taktshang Monastery (nicknamed the Tiger's Nest) dominates the entire valley. It is one of Bhutan's sacred landmarks. For an immersion in Bhutanese culture, we also suggest a visit to the National Museum, a beautiful building dating back to 1656.
Included in the itinerary - A visit to the dzong, on a hill overlooking the city. Sometimes nicknamed the 'Monastery of Jewels', it was built in 1646 by King Shabdrung Ngawang Namgyal. The great annual religious festival (tsechu) takes place in the main courtyard. Also visit the ta dzong (the observation tower, closed on Saturdays and Sundays), which now houses the National Museum and its collections of art, relics, coins and thangkha (Buddhists paintings).

In the morning you'll depart for Taktshang, the legendary Tiger's Nest, which is located almost 3,000ft high up on the mountainside, overlooking the valley. The place takes the name 'Tiger Nest' from the Rimpoche guru, who is said to have arrived there on the back of a tiger to meditate; it is now an important place of pilgrimage. In April 1998, a fire severely damaged the main structure of the building and many of the precious objects inside, but it was completely rebuilt in the years after and it still a fascinating place to visit. It can be reached after a brisk two-hour walk during which it can be gradually seen, often surrounded by clouds. In the afternoon you'll visit Kichu Lhakhang, an ancient monastery in the valley, with beautifully preserved woodwork. After exploring this charming place, you'll have the rest of the day as free time to go for a stroll, go shopping or have a rest.

Back to Delhi, India. Old Delhi is the city's huge and traditional neighbourhood, where charm oozes from the bazaars and the narrow, lively and crowded streets. In your trip to this ancient area you'll have the opportunity to visit the large Jama Masjid mosque: built between 1644 and 1658, it is characterised by three huge domes of white and black marble. In addition to the vast prayer room, the mosque's gigantic esplanade can accommodate nearly 25,000 worshippers; the Chandni Chowk bazaar is a hive of activity full of colours and fragrances; and the Raj Ghat, the memorial to Mahatma Gandhi.
Included in the itinerary - A private tour of the neighbourhood with a private guide.

For an extra touch of luxury...


The Uma Paro Hotel in Paro was built by Bhutanese craftsmen and offers the experience of a precious and preserved world. Its Como Shambhala Spa is a true retreat offering therapies and treatments inspired by ancient Asian knowledge.
In Thimphu, the Taj Tashi was built with the greatest respect for architectural traditions; it is close to the golf course and offers a magnificent view of the mountains.
Optional

Dependent on season, accommodation and activities
The estimated cost for this trip is from £5,600 to £7,000 per person. The final cost of the trip depends on how it is tailored for the individual. The final cost will vary according to several factors, including the level of service, length of trip and advance booking time. The exact price will be your personal quote. The average price for this trip is £6,100 per person.
A few of the benefits of travelling with us

Get in touch
Our experts have the inside track on the destinations they sell and will tailor-make a holiday to your unique requirements.
START PLANNING YOUR HOLIDAY
Contact one of our Bhutan specialists
+ 44 (0) 20 3958 6120 Start Planning Your Holiday