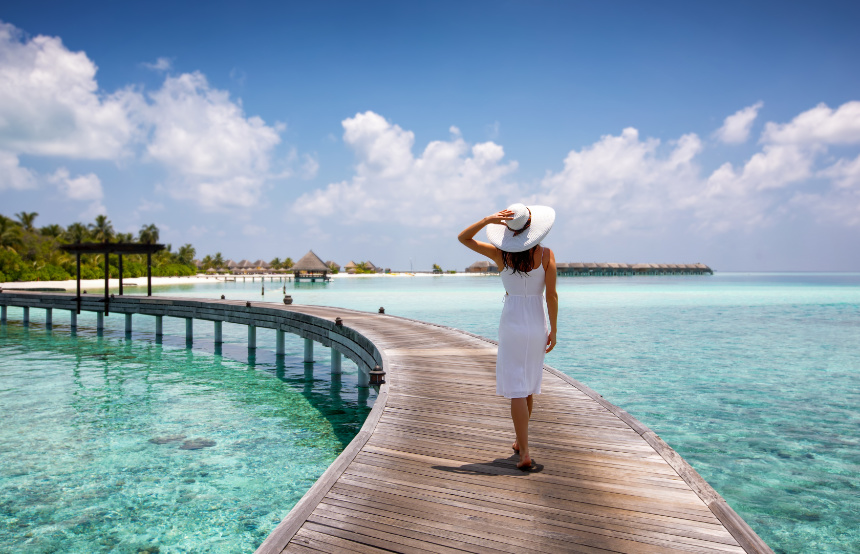 There’s no escaping the fact that winter is firmly upon us here in the UK, and while the more favourable temperatures of autumn are behind us, it’s still possible to escape to certain corners of the world where you’ll be reaching for the air con instead of the heating. So if you’re wondering where’s hot in December, we’re here to help with a round-up of our top destinations...

Kicking off the list is the Maldives, an archipelago of 1,200 islands which were once known as ‘Treasure Island’, in the 10th century, when it acted as a port for Arab and Persian traders travelling the ancient Silk Road. Its proximity to the equator means that temperatures remain between 26°C and 38°C throughout the year and the dry season runs from December to March, making our winter the perfect time to visit this string of island idylls. In fact, December is usually the warmest month, so there’s no need to switch to your winter wardrobe just yet: swimwear and sarongs are the uniform here. Arriving by seaplane, overlooking the threads of bungalows encased in the azure ocean, you’ll quickly forget about the dreary winter months back home. A holiday in the Maldives is the truest form of escapism.

Head to the sunny Florida Keys in December to soak up some winter sun, with the average temperate remaining around 25°C. The architecture of Key West, located at the top of the archipelago, is imbued with West Indian influences and these tropical flavours are also present in the cuisine. Experience the charm of bougainvillea-lined alleyways, eclectic wooden houses, and authentic bars and restaurants; such is the ‘Floribbean’ atmosphere which infiltrates the islands. Back on Florida’s mainland, Everglades National Park is home to abundant wildlife, including alligators, turtles and panthers. And if you’re in search of diving and snorkelling, the coral islands of Islamorada are well worth a visit.

In the search for where’s hot in December, Thailand is another destination that shouldn’t be overlooked. While the seasons vary throughout the country, December tends to be a good month for avoiding the rainy season in all regions, making it an optimal time to visit. Explore alluring ancient temples and traditional markets, where you can sample delicious and unusual street food and don’t miss a trip to the bustling capital city of Bangkok which boasts temperatures of 32°C, despite December supposedly being one of the coolest months. Chiang Mai, located in the north-west, has highs of 29°C and close to no rain. In Koh Samui and Krabi, you’ll find comfortable temperatures between 25°C and 30°C, while Phuket has a more humid, tropical climate. A visit to Thailand is one of inexhaustible variety, with everything from culinary discovery and cultural exploration to relaxing beach days.

Another country with variable climates in differing regions, South Africa also makes the list for where to find some winter sun. The country’s seasons are opposite to here in the UK, thanks to its location in the southern hemisphere, and the diversity between the scenery in each region means it is often referred to as ‘a world in one country’. With everything from mountains and beaches to game reserves, a South Africa holiday can satisfy every appetite. The climate of Cape Province on the southern coast resembles that of the Mediterranean, and Cape Town is a great starting point for exploring Table Mountain and Robben Island, before heading along the Wine Route. In the south-eastern region of KwaZulu-Natal, visit the multicultural city of Durban, where temperatures average around 28°C in December – the perfect weather for exploring. And if it’s a safari you’re after, Kruger National Park is one of Africa’s best and largest game reserves, with a subtropical climate and extraordinary wildlife viewing opportunities.

The teardrop-shaped island of Sri Lanka boasts a rich and captivating cultural heritage, with ancient temples and colonial fortresses steeped in over 2,000 years of history. In December, the best areas to visit include the western, southern and mountain regions, with temperatures averaging around 27°C both on land and at sea. Lush vegetation, tea plantations and stunning man-made lakes make up the landscape, and as the centre of the spice trade, Sri Lanka’s food is another big selling point. In one meal, you could be served up to 14 different vegetable curries to sample alongside fresh fish and rice. Other highlights of the country include surfing at unspoilt beaches, rafting on the Kelaniya Ganga river, and visiting the stone Buddhas in Buduruwagala and Maligawila. Still relatively uncrowded, the dramatic landscapes and welcoming locals make Sri Lanka a truly special holiday destination.