Must-sees in Finland Before it's Too Late 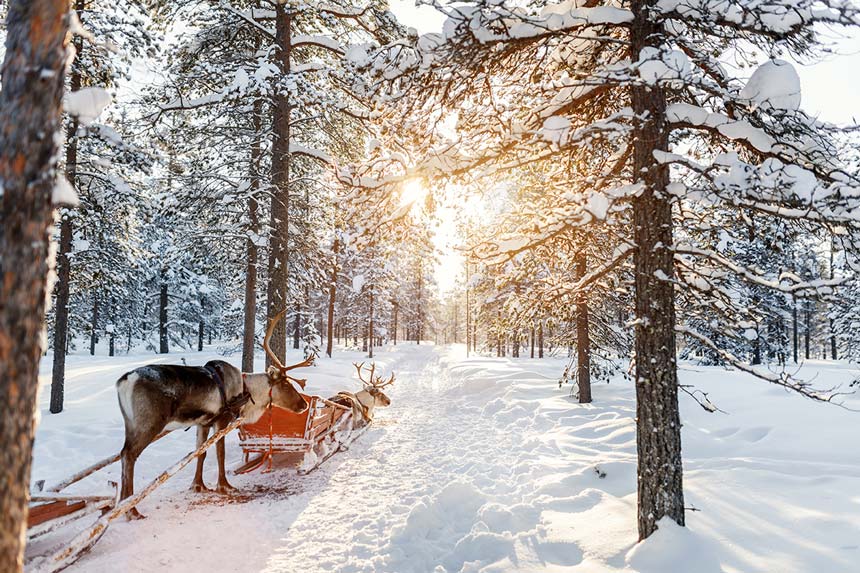 As elsewhere, globalisation is making its mark. The Sami, Europe's largest indigenous people, are bearing the brunt of these changes, which have impacted certain aspects of their culture. More than anywhere else, Finland – and the north of the country in particular - is experiencing the consequences of global warming. Five Must-Sees in Finland Before it's Too Late.

Hear the sound of the Inari Sami language

The province of Inari is immense. It is Finland's largest, as vast as a country like Israel or Kuwait. It's large yet wild, with rough landscapes that alternate with large forests, like those of Urho Kaleva Kekkonen National Park or Lemmenjoki National Park, home to wolverines, bears and elk, but few human beings. There are only 6,000 people, a third of whom are Sami. Only 300 of them are fluent in the original local language, Inari Sami, which UNESCO lists as an endangered language. In Inari Sami, the end is called loppa.

Reindeer have always been a part of the Lapland landscape. The wild reindeer have disappeared, but the traditional economy has continued to be built around the semi-wild herds accompanied by the nomadic Sami. The reindeer almost exclusively eat lichen. In winter, they dig through the snow with their hooves to find it, and nibble their food with their teeth. The snow now arrives later, and leaves much earlier. In between is freezing rain, which traps the lichen under a film of ice. Reindeer can't graze on it anymore. Furthermore, lichen, which is particularly sensitive to changes in climate, is itself in danger : one species has already disappeared, and some 20 others are in danger. The reindeer will have to eat hay and become domestic like cows. Everything will change, from its taste to the landscapes of northern Finland.

Global warming has increased by 0.8 degrees over the past 100 years. In Finland, its double. And that's on average. The further north you go, the greater the warming. On the lakes of the north of the country, where ice would arrive in mid-October, it is still possible to fish in open water at the beginning of December. And to fish on frozen lakes, the layer has to be very thick and solid. It must be able to safely withstand the weight of the fishermen, and all the equipment that accompanies them. Ice fishing season is shrinking at an alarming rate.

There are only three species of freshwater seals. The Saimaa ringed seal is one of them. It lives only here, in the gorgeous setting of Finland's largest lake. However, threatened by global warming and inbreeding, there are now only 300 left. Baby seals are born in the middle of winter, in nests protected by an increasingly thin layer of snow. The young die prematurely, and those who survive are caught in the nets of fishermen or are victims of an ecology modified by the urbanisation of the environment – luxury second homes and hotel residences.

The land of Nokia was the birthplace of the mobile phone throwing world championship. This discipline seems to have lost steam, with the latest record (an  impressive 333ft throw, dating back to 2012) still not certified.  If the championship does not resurface, you can console yourself by attending the Wife-Carrying World Championship,  which arose, it would seem, from a bachelor's theft of a woman from the village of Sonkajärvi, where the championship is now held. Feminists will prefer the mosquito crushing world championship, a competition that is also green, since no products or accessories are used. Jains, whose philosophy  rejects these mosquito murders, can attend the world air guitar championship. As you can imagine, these events sometimes have a short shelf life, but they're an insight into the quirks of Finnish life, and definitely count as some of the must-sees in Finland before it is too late.

I didn't quite know what to expect upon hearing that I was bound for Finland on a 'research' trip[...]

The Levi Igloos are located just seven miles from the bustling town[...]

Few things peak at the grand old age of 99, I certainly will not. Even fewer things[...]