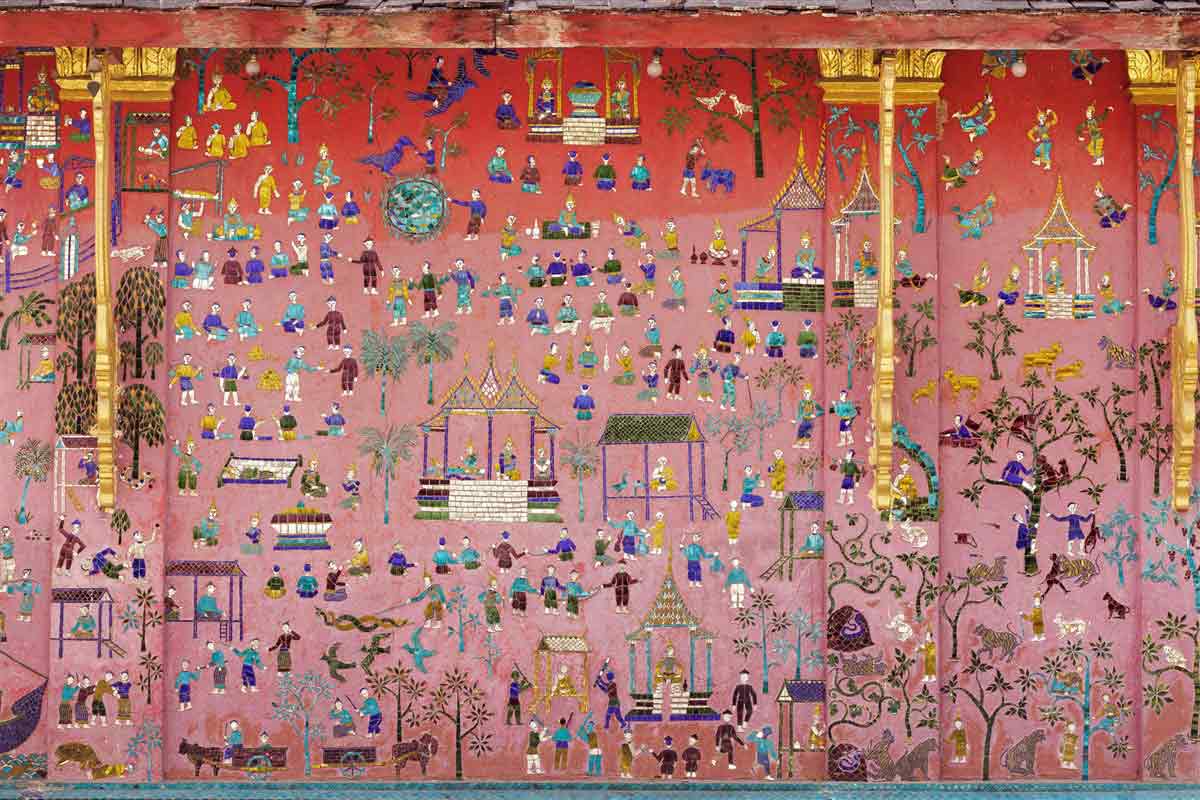 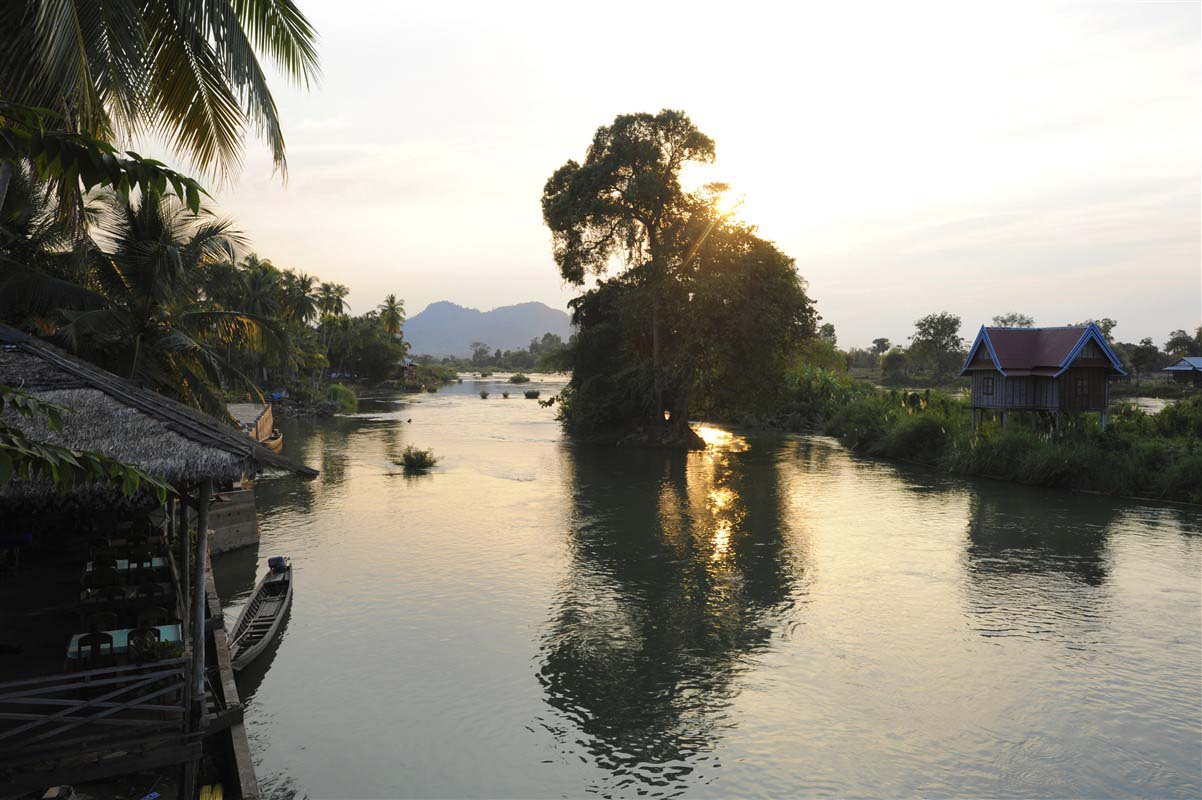 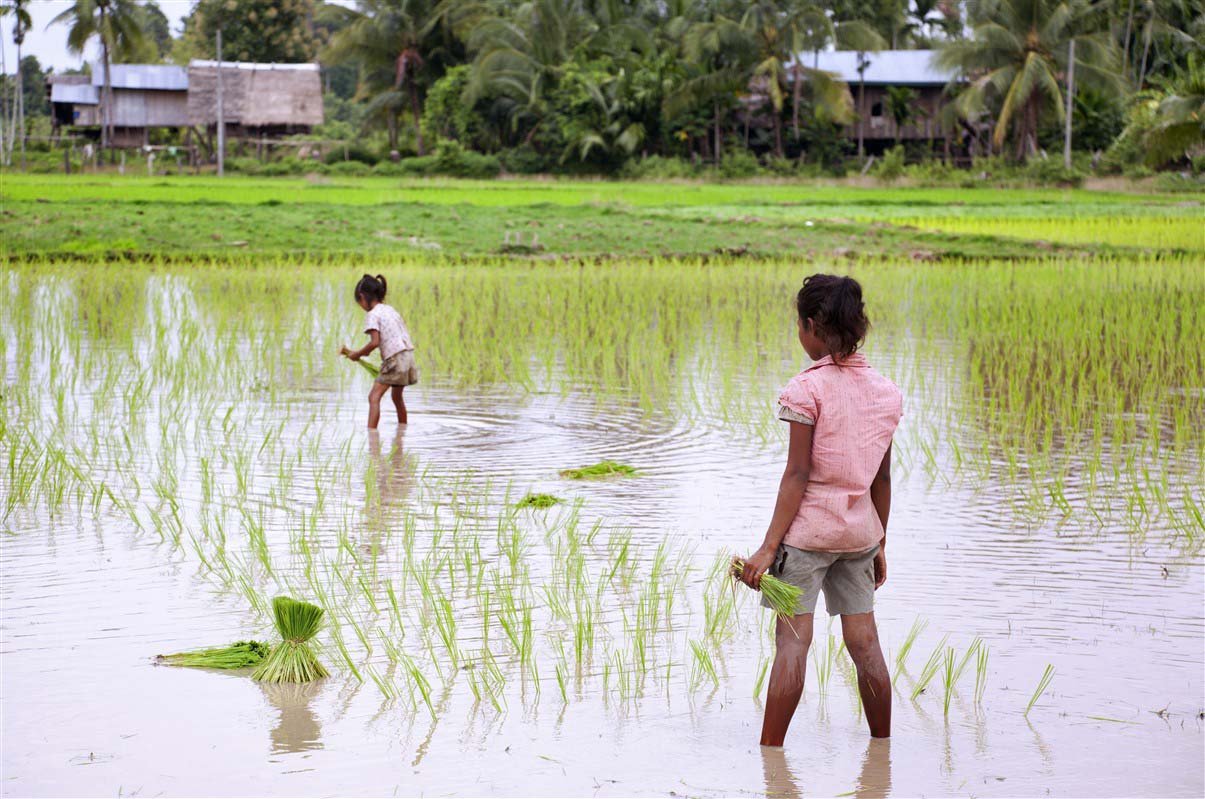 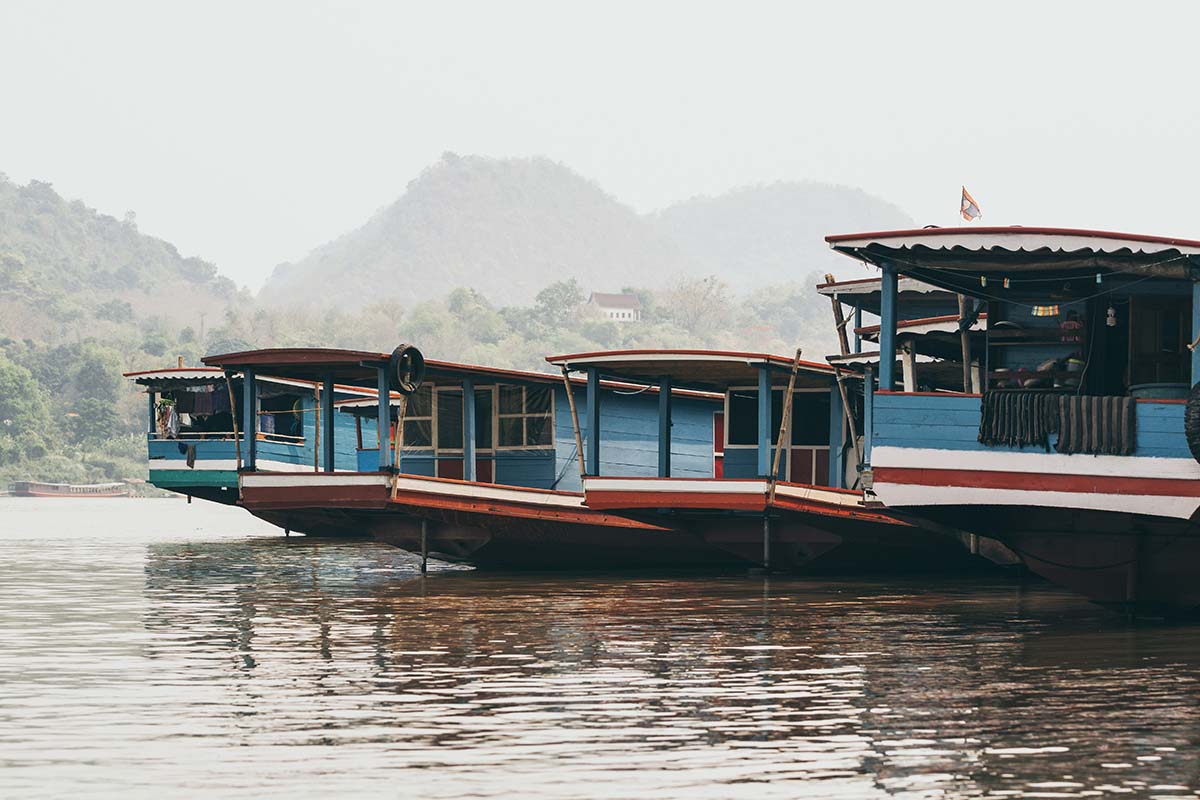 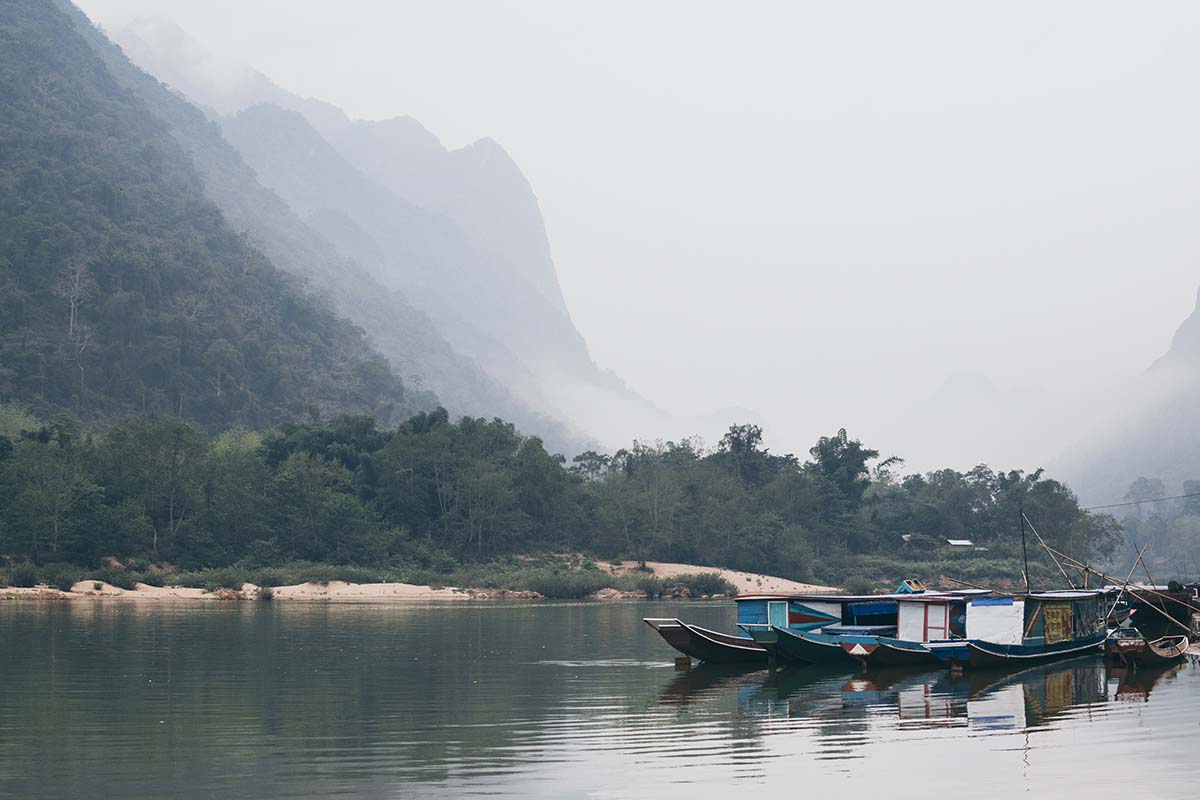 Enjoy a 14-day road trip with a difference - you will be driven instead of driving - as you explore Laos from top to bottom. You will visit the country's many highlights, such as Luang Prabang and the Mekong Delta, but also explore the (even) less visited parts of this wonderful country.

Make your way to the airport in London for the afternoon direct overnight flight to Bangkok, which takes 11-and-a-half-hours.

On arrival in Bangkok this morning, connect across to a short onward flight to Luang Prabang. You'll be met on arrival in Laos by one of our team who will give you a hand with your bags and take you to your hotel. After the chance to freshen up, it's time to hit the ground running as you are transferred through the streets of Luang Prabang to a fantastic local cooking school for an early evening class in culinary wizardry. Laotian cuisine might not garner the plaudits ladled on the cooking of neighbours Thailand or Vietnam, but delicious local specialities include laap (minced meat salad), fer (the Laotian equivalent of Vietnam's legendary pho broth) and mango sticky rice for pudding.

After a demo from the experts, it's your turn to create some authentic Laotian cuisine. At the end, you'll be given a cookbook so that you can take your new found cooking skills back home.

You will then be transferred back to the hotel, or you can enjoy a drink at one of the local bars.

Rise early and embrace a Luang Prabang morning as you are transferred across the picturesque Mekong River to visit a small Buddhist village where you can observe integral traditions such as the alms ceremonial offering. After fascinating and informative discussions with Buddhist monks, you'll return back to the hotel. In the afternoon, you'll take to the bikes, as cycling is the best way to see this city. Take in the stunning Luang Prabang sites - from the Wat Mai temple to the former Royal Palace - as you whizz by on two wheels. Wat Xieng Thong, which you'll visit on your tour, is the city's most revered temple. It is one of the oldest in town, covered in ornate carvings and mosaics, unmatched by any other temple in the country.

Following this essential bicycle tour - replete with mountain and river views, as well as chats with friendly locals - you'll return to your hotel to relax after an invigorating first full day.

Wake up and escape from the crowds on a countryside tour. Travelling by tuk-tuk, venture up the western banks of the Mekong River. Stopping at villages and temples along the way, this is a great opportunity to get a glimpse into seldom-explored areas of this charming country.

In the afternoon you'll travel to Wat Phou Kouey, a beautiful hillside temple on the outskirts of Luang Prabang, to see the colourful sunset ceremony where offerings of flowers will be laid out, backlit by glorious views.

After karmic blessings, you'll relax in the tranquil temple and reflect on the rich and varied culture of Laos. Then you'll return to the hotel for a restful evening.

The Road to Vang Vieng

After breakfast, the road trip begins in earnest, albeit you're being driven rather than doing the driving yourself. You will begin the journey by heading south towards Vang Vieng, which will take roughly five hours. Arrive in Vang Vieng, a small town on the banks of the Nam Song River surrounded by spectacular limestone karst scenery.

The rest of your afternoon is free at leisure with the driver and guide available for insightful tips and suggestions. These might include exploring the nearby caves and villages to visiting an organic farm specialising in the production of Mulberry tea. For those feeling a bit more adventurous, there are cycling and trekking options as well.

If you'd prefer something a bit more relaxing, simply soak up the views and enjoy sunset reflected in the Nam Song River.

This morning, you'll head seven miles north to the ethnic Khmu village of Viengsamay where after an introduction to the basics of kayaking, you'll set off down the beautiful Nam Song river. After travelling downstream to Tham None (Sleeping Cave), which is one of the biggest caves in Vang Vieng, you can swim through the entrance to the cave. Elsewhere the imposing Vang Vieng cave served as a rescue shelter for the villagers during the Second Indochina War. The final leg of the journey is a gentle paddle back to Vang Vieng.

You will then depart for Vientiane, the capital of Laos. The journey will take around four hours, with a couple of stops along the way in order to eat, rest or explore.

This morning enjoy a guided tour to discover the hidden charms of Vientiane, an often under-rated city. Your guide will show you some of the splendid temples and monuments that Laos' capital has to offer, before you pay a visit to COPE, an association working to help landmine victims. A visit to the COPE centre provides in-depth information about the history of the American/Vietnam war and the lasting impact of unexploded ordinances (UXO) in the area and the efforts underway to clear them. Afterwards, get ready for a true taste of Laos with an evening exploring the best street food stalls in Vientiane. After dark, the street stalls fire up their grills and start cooking. Take a walk through Sihom, an area of small stalls selling cheap but tasty snacks, and continue onto the nearby Ban Anou night market, the city's culinary hub. While you're out, make sure to visit a couple of beer shops; these popular post-work watering holes invariably have a fun atmosphere.

After an early breakfast, meet with your guide for the six-hour drive to Kong Lor Caves. Enjoy a picnic lunch en route, on arrival to the small town of Ban Kong Lor, check in to a small local hotel, and depart for the infamous Kong Lor Caves.

Suitably equipped with head torches and life jackets, you will enter the cave and board a longtail boat for a voyage the length of this spectacular cavern - a length of five miles guided by the glow of your torches.

On reaching the other side of the cave, you can stop for refreshments and walk to local villages, enjoying the scenery, and observing locals and taking in their way of life.

You will return by boat, travelling back downstream through the cave, to Ban Kong Lor.

This morning you will take a guided walk to explore the surrounding villages. You will then be driven to Savannakhet, via Thakhek, which will take approximately five hours, and include a lunch stop and the chance to stretch your legs.

Before entering Savannakhet, you'll stop at the beautiful 16th century temple of That Ing Hang where an impressive central stupa dominates a courtyard flanked by statues of Lord Buddha. That Ing Hang is among the most revered temples in Laos and many Buddhists will travel here in December for the annual 'Boun Phathat' ceremony.

On reaching Savannakhet, you'll take a short tour of the architectural highlights with a private guide, including visits to various French villas and the striking St. Teresa Catholic Church.

Budding palaeontologists may enjoy a visit to the Dinosaur Museum. Dinosaur remains are still being discovered nearby, some of which are between 150 and 250 million years old.

The remainder of the day is free for you to stroll along the banks of the Mekong watching local life in action.

To the Bolaven Plateau

After an early breakfast, you will drive to Salavan Province and the Bolaven Plateau, an area of highlands sitting just east of Pakse. Most of this region sits between 3,000 and 4,000ft above sea level and features dozens of coffee and tea plantations as well as hill tribe communities. After lunch at a local restaurant, you'll make your way to the Tad Fane Waterfalls, located 24 miles from Pakse. These aqua-monoliths stand 400ft tall.

En route, stop to visit a coffee and/or tea plantation. The beans grown in the cool fresh air of the Bolaven Plateau produce some of the finest arabica beans in the world, cultivated by the families who live in the region's villages.

To the Mekong Delta

After breakfast, you will head to Wat Phou - a spectacular pre-Angkorian temple that sits amid the rice fields and waterways of southern Laos, and recognised by UNESCO as a World Heritage Site. The temple served as the most important economic and political centre of the region and is still one of the Laotian people's most revered temples.

You'll then pass through the small town of Champasak, where French colonial buildings offer a great contrast to Wat Phou, and enjoy lunch in a local restaurant.

Continue south to the 4,000 Islands Region. Locally known as Siphandon, this area is where the Mekong stretches to over eight miles wide. The river meanders between a large number of islands, creating waterfalls and rapids. You'll cross the water on a short boat trip, arriving at your accommodation in the late afternoon.

To Don Det and Don Khone

After breakfast this morning, you will depart to explore the peaceful islands of Don Det and Don Khone. The islands are home to plantations and simple villages, and we recommend exploring the area either via bicycle or tuk-tuk. Locals revere the Lippi Falls, which are on the west of Don Khone Island, as legend has it that the falls trap bad spirits. This area has a far-reaching colonial history. As the islands linked Laos to Cambodia and Southern Vietnam, railway and bridge were built to overpass the waterfalls. Today, this overpass is one of the most scenic viewpoints in all of Laos.

Afterwards you'll take a short boat trip where you may even catch a glimpse of elusive Irrawaddy dolphins.

For you waterfall lovers, the imposing Khone Phapheng waterfalls provide today's final highlight. During this visit, discover why this is the only part of the Mekong that cannot be accessed by boat.

R&R by the Mekong

Today is yours to relax by the Mekong.

This morning you'll be transferred to Pakse for a flight to Bangkok where you will connect on to your flight to London. The direct flight from Bangkok takes around 13 hours and arrives back in London in the evening.

Dependent on season, accommodation and activities
The estimated cost for this trip is £3,200 to £4,090 per person. The final cost of the trip depends on the way we tailor it especially for you. The final cost varies according to several factors, which include the level of service, length of trip and advance booking time. The exact price will be provided on your personalised quote. The average price for this trip is £3,555 per person.
A few of the benefits of travelling with us

Get in touch
Our experts have the inside track on the destinations they sell and will tailor-make a holiday to your unique requirements.
START PLANNING YOUR HOLIDAY
Contact one of our Laos specialists
+ 44 (0) 20 3958 6120 Start Planning Your Holiday
100% Tailor-Made Holidays
1