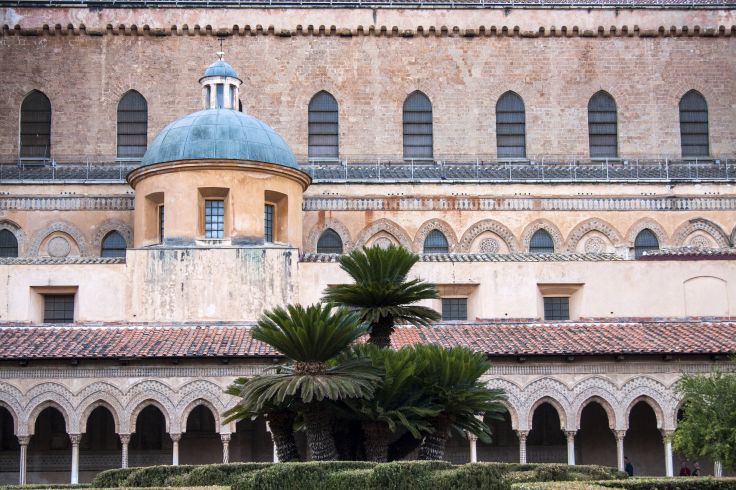 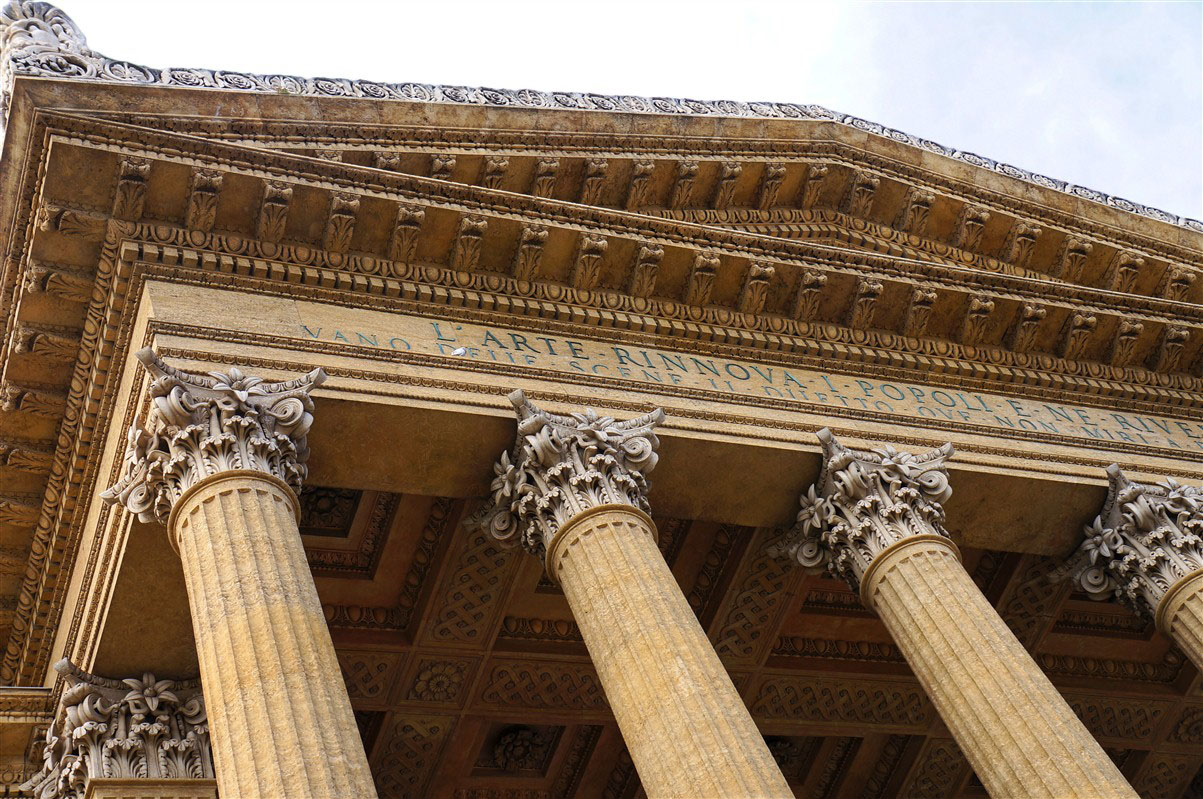 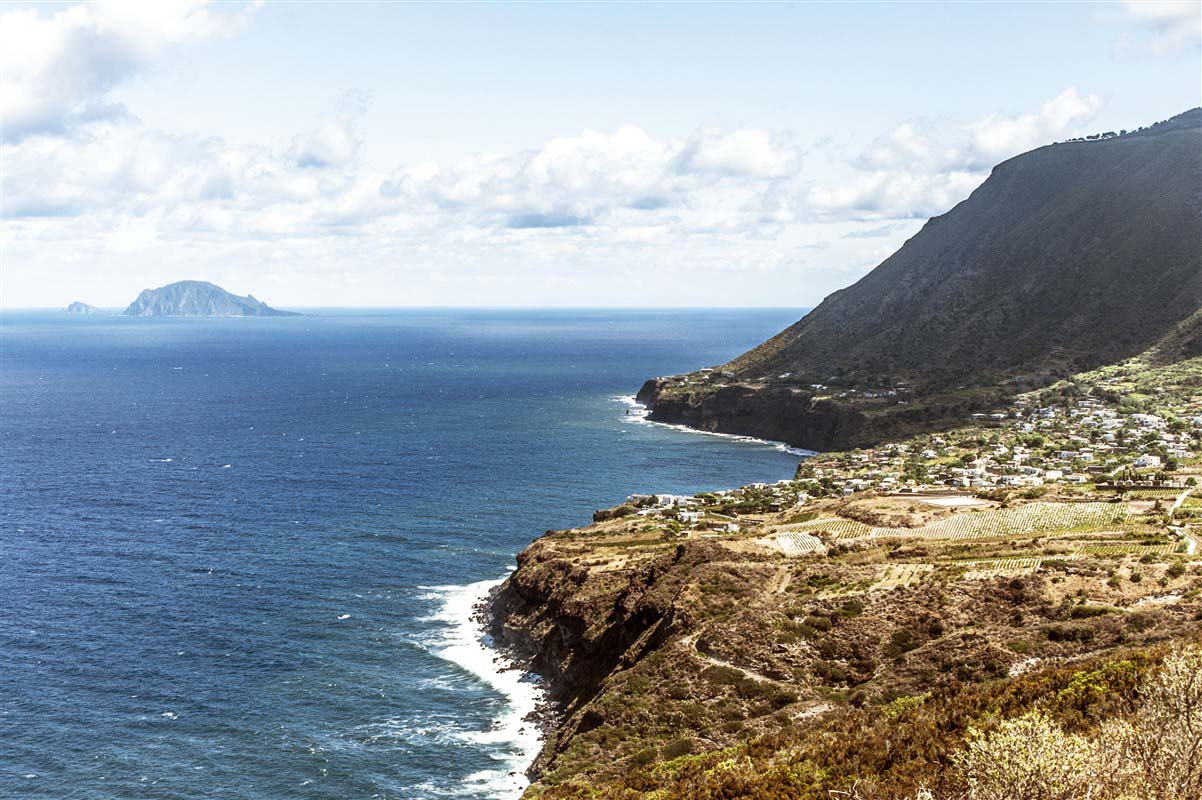 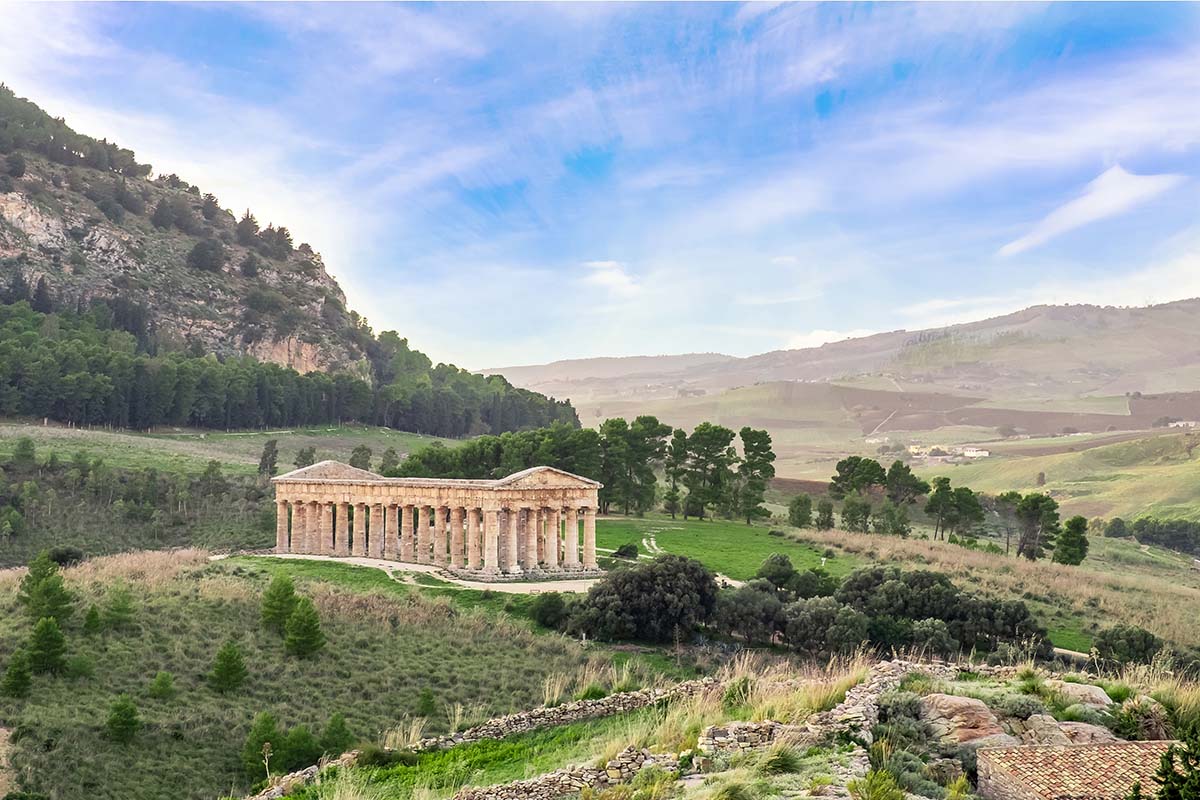 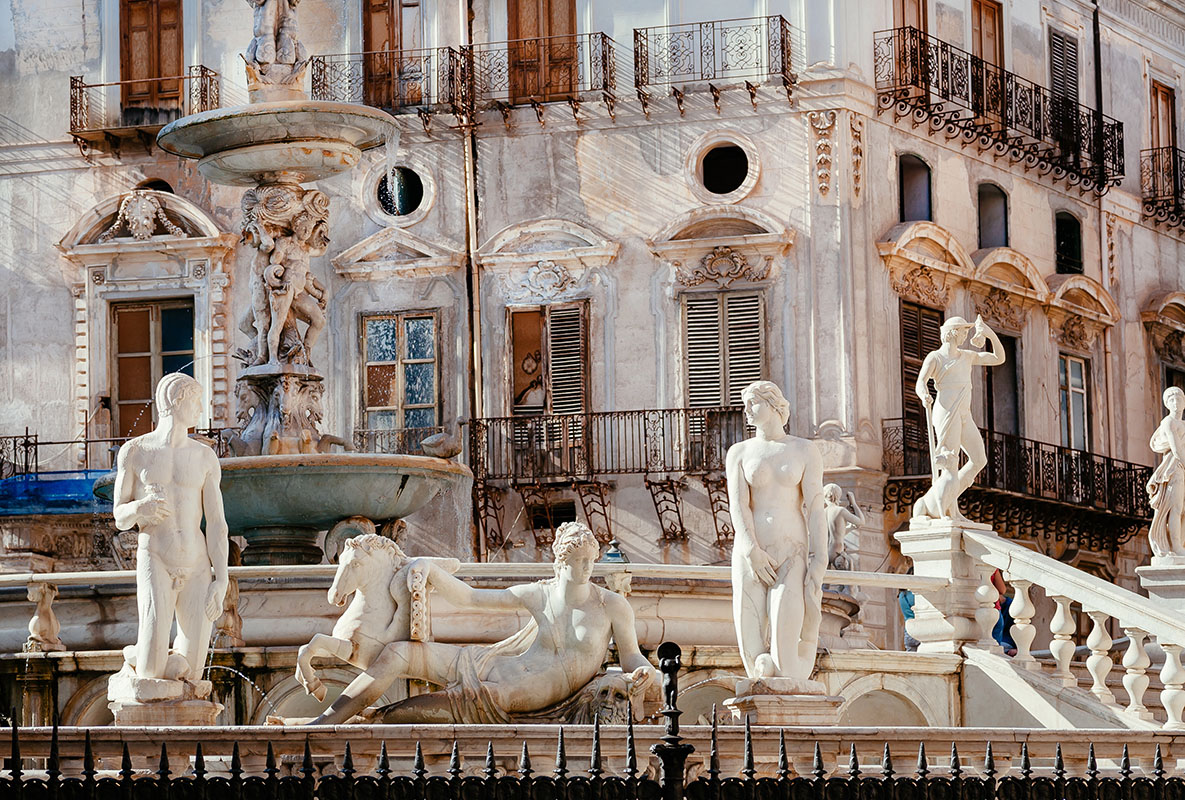 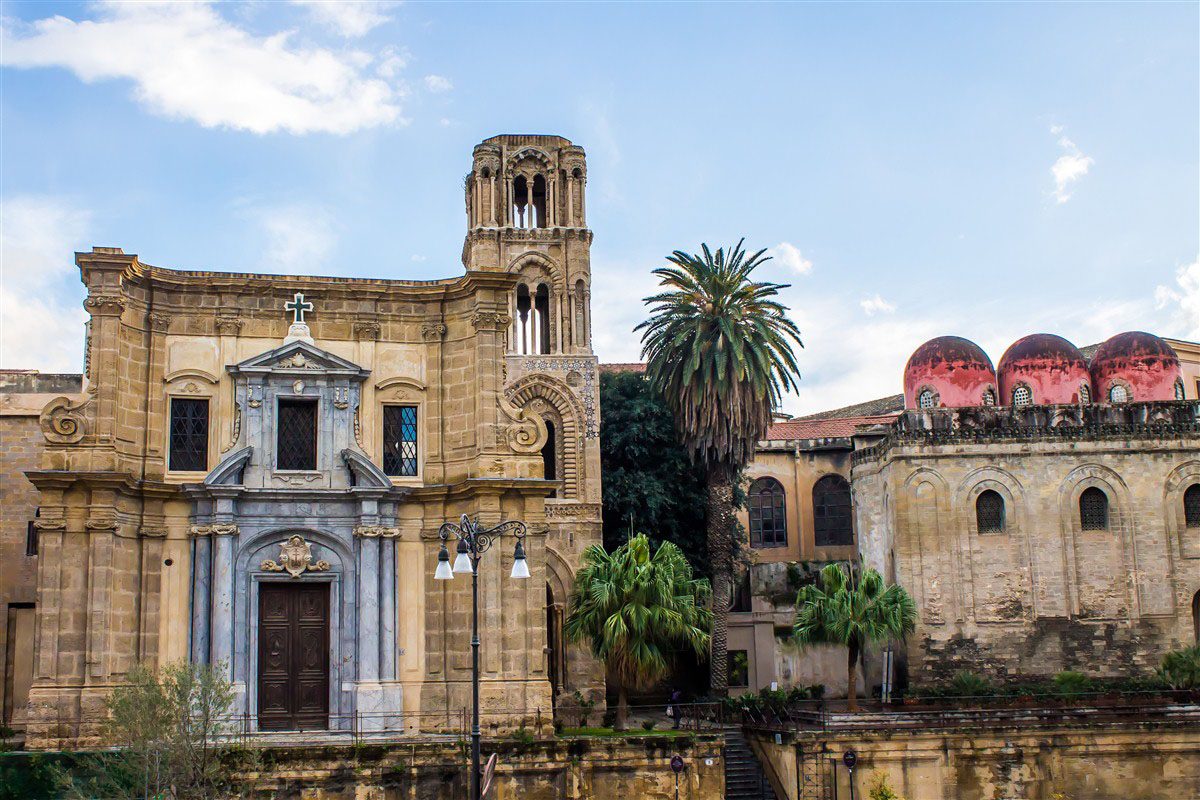 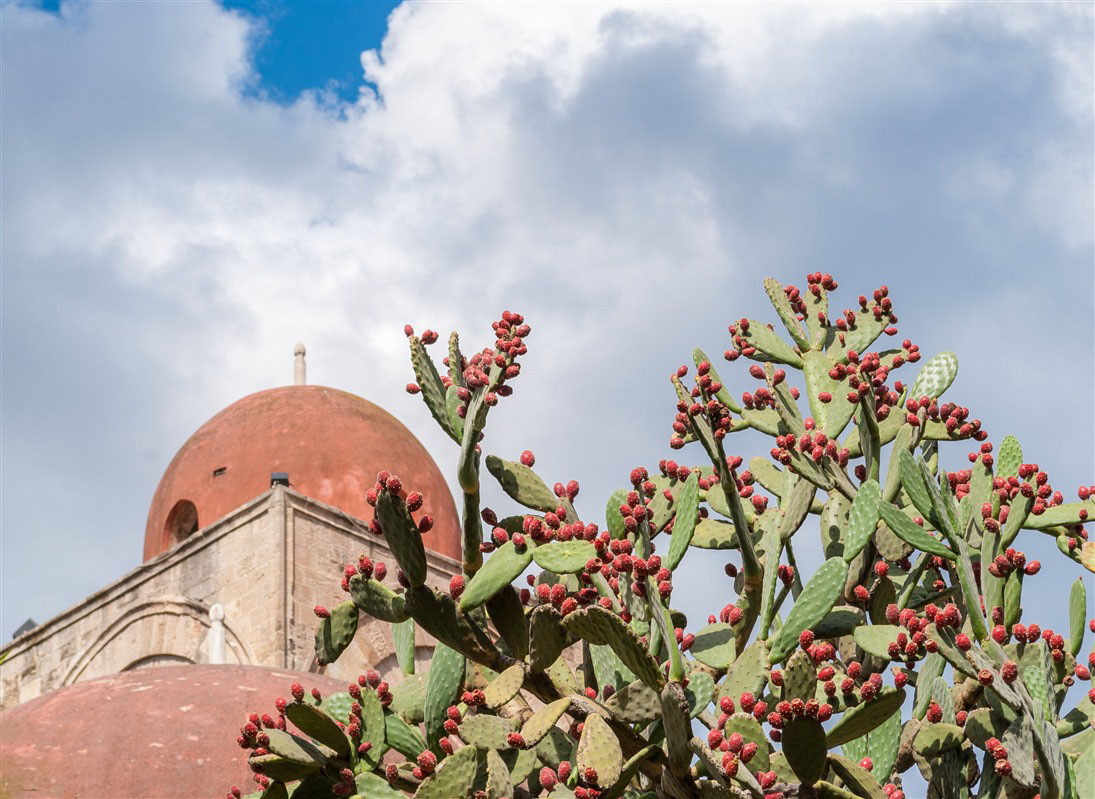 Palermo is a proud and welcoming city. Amid the piazzas and fountains, you'll come face to face with the Norman Palace, the Palatine Chapel with its dazzling Byzantine mosaics, the catacombs, or the Puppet Museum, the last remains of an artisan tradition. Don't forget to take a stroll along Mondello beach on the outskirts of the city, which is popular with Palermo residences on sunny days, or the botanical garden with its thousands of Mediterranean plants. Along the way, you'll have a taste of arancini and pane e panelle (chickpea patties), then choose your favourite ice cream from Spinnato, an institution in the city. At siesta time, Palermo falls asleep for a few hours before regaining its overflowing energy, until late into the night.


Facing the Gulf of Palermo,
and located outside of the bustle of the city, your hotel hides behind a monumental facade. The interior decor combines medieval, Renaissance, neo-classical and Art Nouveau influences. The rooms are spacious, comfortable and stylish, in line with classic Sicilian style. You should really go to the seaside, because the views there are splendid. The large swimming pool above the sea, bordered by Greek colonnades and a flower garden, is perfect for a relaxing swim. At dinner time, you'll rediscover Italian cuisine in the cosy atmosphere of the restaurant.


A tour of the city's cathedrals - Accompanied by a private guide, you'll visit two of the city's major landmarks. The magnificent Cathedral of Palermo will seduce you from the outside; its façade has Moorish markings and is crowned by a classic dome. This is where the graves of many of the Norman kings who once ruled Sicily lie. To the south-west of the city, the 12th century Cathedral of Santa Maria Nuova de Monreale, which is a UNESCO World Heritage site, is also worth a visit. The cathedral has an Arab-Norman architectural style (typical of this region) and is renowned for its Byzantine mosaics, which completely cover the chancel and the upper sections of the walls; these mosaics were made by local artists. Before you leave, you'll stroll through the adjoining cloister, which is just as amazing.
Opera at the Teatro Massimo - Having reopened in 1997, the Teatro Massimo is the largest opera house in Italy and the third largest in Europe, after the Palais Garnier in Paris and the Staatsoper in Vienna. After more than twenty years of restoration work, the opera house has been modernised but preserves a number of original elements - red velvet, Murano chandeliers, woodwork and frescoes. The itinerary includes watching an opera at this legendary opera house.

This is where Italian film The Leopard was filmed. Well, the ball scene was filmed here. Film director Luchino Visconti used the ballroom and gallery of mirrors of the Palazzo Valguarnera-Gangi to shoot the definitive scene of the film. The palazzo still astounds visitors today, who come to admire the grand Sicilian style of the 18th century.
Option

Dependent on season, accommodation and activities
The estimated cost for this trip is £1,800 to £2,000 per person. This trip is tailor-made to your exact specifications so prices will fluctuate. The cost varies according to several factors, including the level of service, duration of the trip and how far in advance you book. The final cost will vary depending on several factors, including the level of service, length of trip and advance booking time. The exact price will be provided on your personalised itinerary. The average price for this trip is £1900 per person.
A few of the benefits of travelling with us