Jaipur, known as the "pink city", is a land of vivid colour and a kind of glorious chaos. Guest blogger Tony Herbert visited the city with the roseate glow as part of his bespoke holiday touring around Rajasthan...

Where to stay: Samode Haveli

Our hotel in Jaipur was another former palace, the Samode Haveli, where a current Maharaja (not of Jaipur) lives with his dogs, which are walked around the garden by a functionary daily.

It's a delightfully calm place, right in the middle of Jaipur and its seething multitudes (all 4 million of them). Our room is vast, with ancient photographs of assorted maharajas on the walls. 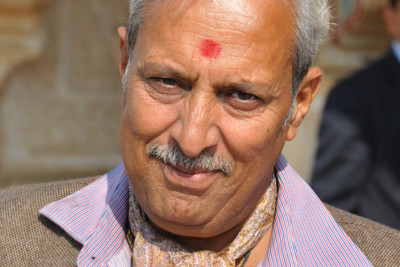 Life is in the detail: guided tours

Our guide around the city is Thakur Ummed Singh, a most aristocratic name (Thakur means Lord, or perhaps just Sir). Ummed is a relation of the Maharaja, and this is evident in the somewhat curious way that the other guides and functionaries at the palace greet him in a deferential kind of way. As a result, we get a modest amount of special treatment.

He is a charming man, and we feel in good company: we buy a picture book with a whole section devoted to pictures of his daughter's wedding; and another with a picture of him having a chat to President Clinton. He is also, as one might expect, a first class guide. 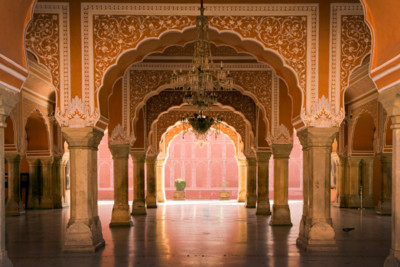 What to see: the City Palace

The City Palace in Jaipur is a museum that extends over many acres. We learn about the royal family of Jaipur, for in a part of the palace, the current Maharaja lives, although he is only 14 years old. The previous Maharaja, who only died last year, was known as "Bubbles", so called by his nanny confronted by the champagne celebrations that followed his birth, as no male heir had been born in living memory. His predecessor, the last actual ruling Maharaja before they were all technically stripped of their titles, died as a result of a polo accident in Cirencester. His wife was the celebrated beauty Gayatri Devi of Cooch Behar, who died recently at an advanced age. 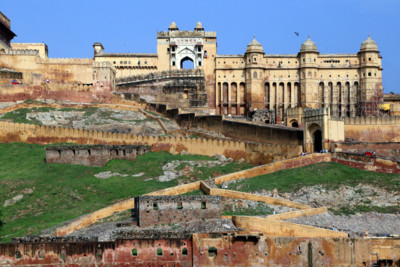 What to see: the Amber Fort

The other major sight at Jaipur (or rather, on a hill some miles outside Jaipur) is the Amber Fort; so-called one would assume because of its golden-amber colour, but we are told that it's a corruption of a Hindi word for "high up".

It's impressive and, in one of the open courtyards, a group of beautifully painted elephants trundle around with tourists on their backs. Plainly, Ummed thought that such a thing was well beneath our dignity. I wasn't so sure, but we dutifully followed his advice and admired them from the ground.